DANIEL O'DONNELL has hit out at plans for oyster farms to be built on a beach land near his home in Donegal.

The Irish singer lives in the Donegal Gaeltacht area of Cruit Island where plans are afoot to bring oyster farming to the region.

One farm would cover 12.5 hectares of beach land in Kincasslagh Bay at Cruit strand if the plans, by Co. Cork-based Italian business woman Benedetta MC Cazzamali, were to go ahead.

O’Donnell is not alone in his concerns over the farm.

Hundreds of locals have already having objected to the placement of the proposed site due to fears over spoiling Kincasslagh Bay's beautiful stretches of sand.

Speaking from Tenerife, the 54-year old told Donegal's Highland Radio that although he supports the creation of jobs, he believes the farm’s proposed location is unsuitable as the beach is a popular tourist destination.

“I can’t believe that the people who grant the licenses would come out to where these farms are proposed – I’d be very surprised if they gave it the go ahead,” he said.

“I would appeal for these plans to be moved. I’m hoping that an alternative site or sites can be found because this is not the place for oyster farms, two of the most beautiful strands in the country.

“I’m all for job creation but this is a tourism amenity and an amenity for the local pony club and local people generally.

“I’d never turn my back on job creation – but this would be a terrible eyesore on beautiful white sandy beaches and I would hope somewhere less obtrusive could be found,” he added. 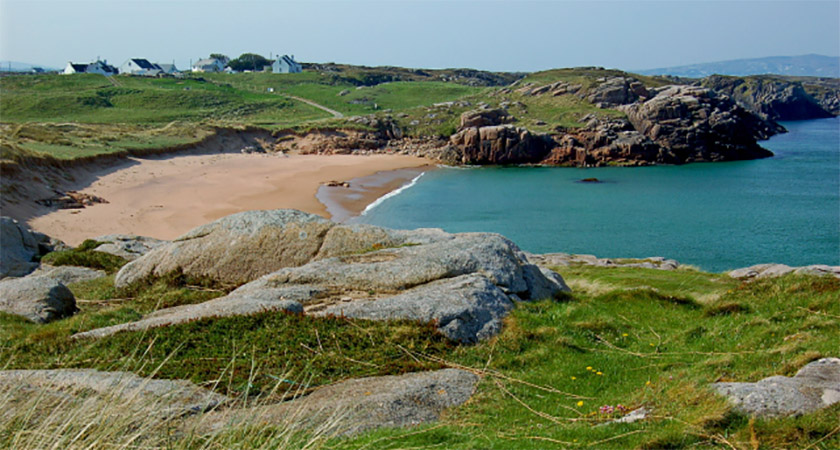 Cruit Island's Kincasslagh Bay (Picture: Wikipedia Commons)
An application for another oyster farm site at nearby Keadue strand was withdrawn on Wednesday, following local opposition to the proposal there.

Sweeney McHugh Solicitors released a statement today on behalf of their client Manus Bonner who had made the application to the Department of Agriculture, Food and Marine.

The statement read: “It was our client’s intention that such licence could be used along with the family lands to create a sustainable commercial business, which would have brought investment and employment to the area.

“However, since the application for the licence has been advertised locally, our client has become aware of resistance to the proposed venture locally.

“It was never our client’s intention, nor that of his family, to create any hostility or contention with his neighbours or the people who regularly use Keadue Strand.

“Our client, therefore, has instructed us to write to the Department of Agriculture, Food and Marine to inform them of his intention to withdraw his application and further instructs us that he does not intend to make any further application at a later date in this regard.”

The campaigning group Save our Strands - Cruit, Kincasslagh, Keadue, formed after the applications became public, said they were not opposed to oyster farms, but said they believed the locations selected for the proposed projects were inappropriate because the scenic strands are well used by local people and tourists to the area.

Save Our Strands, the campaign group who have protested plans for oyster farms in the area, will continue to oppose the Kincasslagh proposal - and they certainly have a powerful player on their side in the form of Daniel O'Donnell.