DONALD TRUMP has been sanctioned by both Facebook and Twitter after appearing to suggest Covid-19 is not as deadly as the flu.

The President made the claims in a post shared on both social media platforms just a day after leaving hospital after being diagnosed with coronavirus.

Trump, who is continuing his recovery in isolation at the White House, described the coronavirus as “less lethal” than flu.

The claims came despite more than 210,000 Americans succumbing to the virus.

In the now-deleted tweet, he wrote the US had "learned to live with" flu season, "just like we are learning to live with Covid, in most populations far less lethal!!!"

Twitter opted to hide the message, promoting the widely discredited claim Covid-19 is not as bad as flu, behind a warning against "spreading misleading and potentially harmful information". 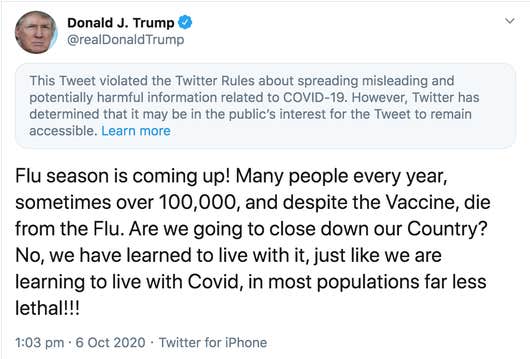 According to data compiled by Johns Hopkins University, Covid-19 is thought to be roughly 10 times deadlier than flu.

A Facebook company spokesperson said: "We remove incorrect information about the severity of COVID-19 and have now removed this post.”

Donald Trump impeachment: What happens next?

On his way out: Is Donald Trump allowed pardon himself and how would it work?