THE FINAL surrender letter handwritten by Pádraig Pearse three days before his execution is to be sold at auction this week for between €1-1.5million.

Penned by Pearse during the Easter Rising on April 30, 1916, the surrender order, if sold, will mark the most expensive work of art or historical item ever sold at auction in Ireland.

Adam's Auctioneers, who will be auctioning the single-page letter in Dublin on Wednesday, have described the note as "the most significant Irish document to be offered for sale".

The order reads: "In order to prevent further slaughter of the civil population and in the hope of saving the lives of our followers, the members of the Provisional Government present at Headquarters have decided on an unconditional surrender, and Commandants or Officers commanding districts will order their commands to lay down arms.

Speaking at a commemoration to Irish First World War servicemen last month, Arts Minister Heather Humphreys said that the Irish Government would not be bidding on the historic item.

"The cost mentioned was between €1m and €1.5m so there were other pressures that we felt we had to meet,” she said.

"There were a number of such letters of a similar type. We felt that to spent €1m or €1.5m on one single letter would be rather a lot.”

Sinn Féin spokesperson on heritage, Peadar Tóibín, said that the sale of the letter to a foreign buyer would be a loss to Ireland.

“Pearse’s surrender letter is one of the most iconic and important historical documents in the history of our state,” he said. “Given the international interest in the letter, there is a high probability that it will be sold to a foreign bidder and leave the country for good.

“While the cost of acquiring the letter could cost upwards of €1 million, there is no doubt that it should be in the hands of one of our cultural institutions for safeguarding and display.” 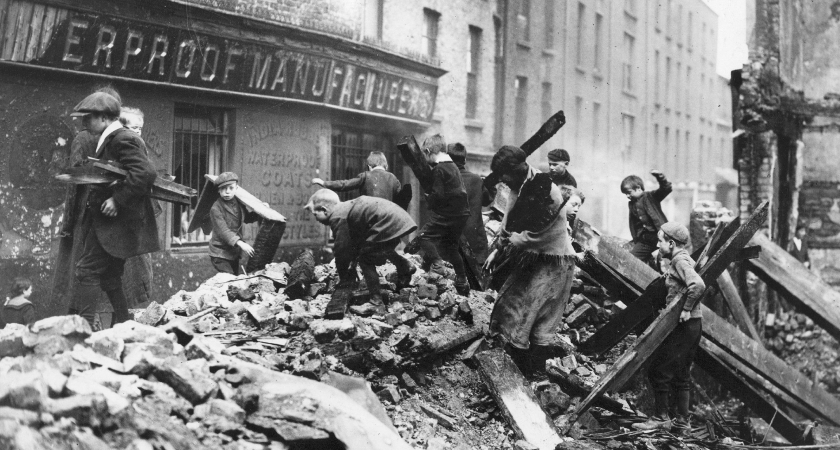 The Easter Rising came to an end on April 29, 1916 [Picture: Getty]
The letter, which was hand-delivered to Captain Garry Holohan by Father Columbus just prior to the end of the Rising, has been in the hands of a private collector since 2005.

Captain Holohan, who was in charge of the Four Courts command, ceased hostilities and surrendered after reading the document.

According to The Irish Times, Adam’s Auctioneers believe the letter is likely to be sold abroad after a lack of interest from buyers at home.

The National Museum of Ireland already holds two other letters written by Pearse to different garrisons in Dublin telling them to lay down their arms.

London’s Imperial War Museum houses the official surrender document which brought an end to the Rising at large, which was typed by the British and signed by Pearse on April 29, 1916.