ANOTHER SPAT has erupted between the EU and the UK as European Commission vice-president Maros Sefcovic has accused the UK of failing to meet a number of its obligations relating to the Northern Ireland Protocol.

Mr Sefcoviv – who was blamed by the commission for the debacle of triggering Article 16 and raising the prospect of a hard Irish border – has written to his UK counterpart, Michael Gove, saying that flexibility on the implementation of the protocol will depend on the UK’s compliance with the terms of the agreement reached in September.

On the topic of certain meat and animal products, he said that "blanket derogations" from EU law in Northern Ireland "cannot be agreed beyond what the Protocol foresees already", RTE reports.

The letter outlining Mr Sefcovic’s concerns indicated that border control’s at Belfast and Larne ports were "not yet fully operational" and that controls being undertaken by Northern Ireland veterinary officials were, in fact, "not in compliance with the Withdrawal Agreement".

As things stand, there were currently "very few identity checks" other than those carried out on livestock, he said, and there was "a very limited number of physical checks" on exports from Britain to Northern Ireland. 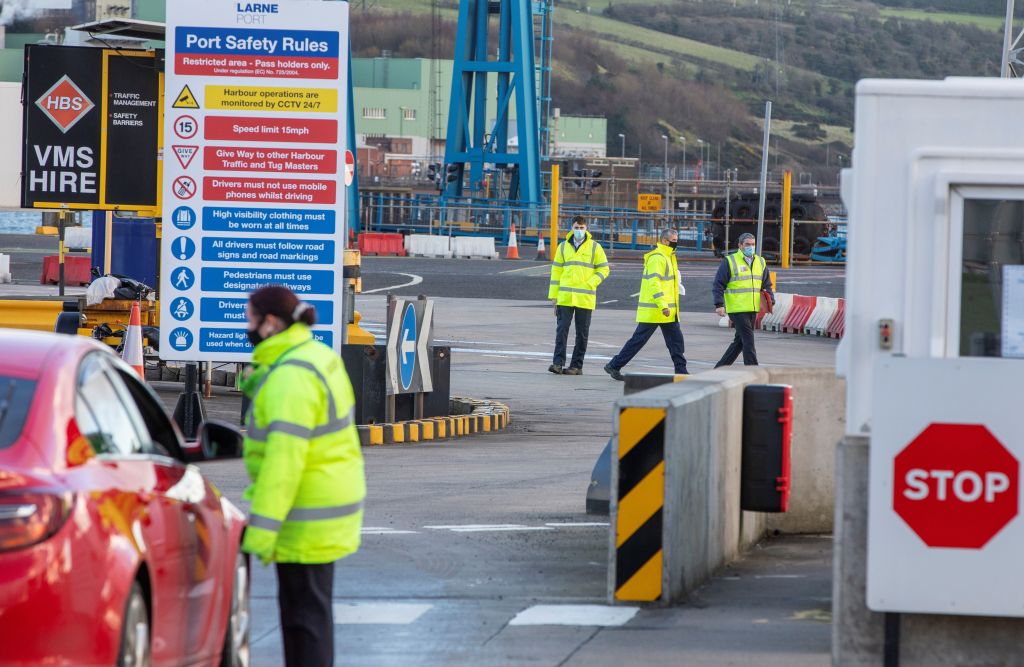 An official checks a motorist as truckers carrying freight from Scotland disembark a ferry at the Port of Larne in County Antrim, Northern Ireland on January 1, 2021, as a new trade border between Northern Ireland and the rest of the UK began operating at 23:00 GMT on December 31, 2020. - In Northern Ireland, the border with Ireland will be closely watched to ensure movement is unrestricted - key to a 1998 peace deal that ended 30 years of violence over British rule as Britain on Friday began a new year and life outside the European Union after leaving the bloc's single market. (Photo by PAUL FAITH / AFP) (Photo by PAUL FAITH/AFP via Getty Images)

Mr Sefcovic continued with this line of criticism, writing that "all non-compliant consignments are accepted [at Northern ports], even if destined for Ireland (ie the single market)".

In further violation of the agreed upon legislation, Mr Sefcovic said that goods were "not labelled and the packages not monitored at destination," as per the terms of the deal reached in December.

"In addition, a number of consignments are entering Northern Ireland without being declared or without valid certificates," he wrote.

The letter comes in response to Cabinet Office minister Michael Gove who requested changes to the protocol, including extending exemptions for products of animal origin until 1 January 2023, RTE reports.

Mr Sefcovic also said that EU representatives were not being given access to British IT systems, including the import clearance system, or CDS, as per the terms of the 17 December agreement.

He wrote: "We are thus not currently receiving the information as to how mutually agreed flexibilities including, eg, the trusted trader scheme, or simplified health certificates are being used in practice."

Both men are due to meet in in London on Thursday.

Perceptions that the UK is attempting to capitalise on the controversy over the commission’s decision to trigger Article 16 on 29 January has hardened the position of many EU states on the flexibility they are prepared to offer the UK in implementing the protocol.

Commenting on this issue, a UK government spokesperson said: "It is disappointing that the Commission has failed to acknowledge the shock and anger felt right across the community in Northern Ireland from its decision to trigger Article 16, and the need to take urgent steps to restore confidence as a result.

"The Chancellor of the Duchy of Lancaster will underline the need for such action and political leadership in this regard when meeting with Vice-President Sefcovic in London tomorrow evening."