THE IRISHMAN missing in Israel may be suffering from 'Jerusalem Syndrome' authorities have said after a trail of Bible pages were found in the desert.

Oliver McAfee, 29 and originally from Lisburn but living in Chelmsford, was last seen on November 21 cycling on the Israel National Trail near the desert city of Mitzpe Ramon.

Mr McAfee embarked on a cycling trip through Israel at the end of October and had intended to stay for five weeks, returning at the start of December.

However, after he missed his return date his family and friends became concerned and reported him missing to Israeli authorities.

A search was launched for McAfee, a gardener and devout Christian, after hikers found his wallet, keys and computer tablet earlier this month in the Israeli desert.

Mr McAfee's other possessions, including his bicycle, bags and shoes, were found separately.

Now search teams scouring the Israeli desert to trace Mr McAfee have found a 'strange trail of torn out Bible pages,' leading them to suspect he was suffering from psychotic delusions known as 'Jerusalem Syndrome,' according to The Telegraph.

An Israeli police search team discovered a series of pages ripped from the Bible carefully weighed down with rocks in the area that he was last seen.

Other handwritten notes quoting Bible verses were also discovered, as well as notes including references to the story of Jesus fasting in the desert for 40 days and 40 nights.

Despite examination of the texts, search teams have not found any clues as to Mr McAfee's location.

Investigators also found what they described as “a chapel” apparently made by Mr McAfee on top of a rocky desert ridge outside the town of Mitzpe Ramon.

They believe he cleared a circle-shaped area of stones and carefully used a bicycle tool to flatten out the sand. 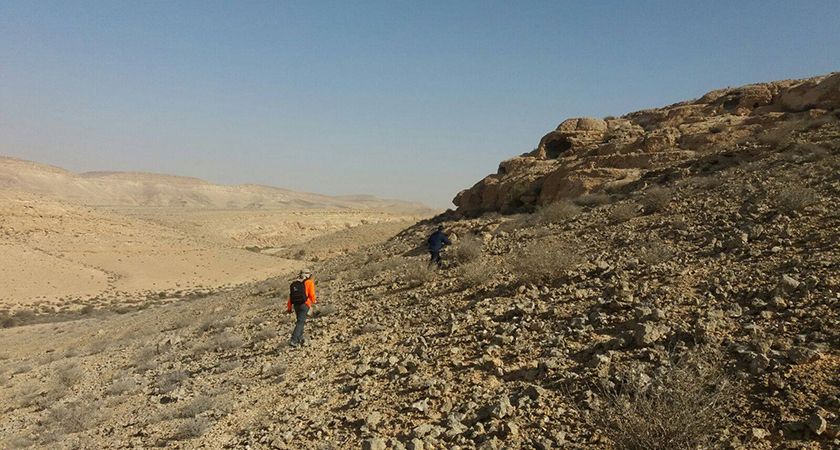 “He seems to have been doing all kinds of ceremonies that we don’t really understand,” said Raz Arbel, one of the leaders of an all-volunteer search team that has been looking for Mr McAfee.

The Biblical clues have led the search party to suspect that Mr McAfee may be suffering from Jerusalem Syndrome, a well-documented mental phenomenon where visitors to the Holy Land suffer psychotic religious delusions, including the belief that they are figures from the Bible.

Dr Moshe Kalian, the former district psychiatrist for Jerusalem and an expert in the condition told the paper: “I have never met this man [Mr McAfee] but from the reports that he was involved in some kind of religious experience in the desert, it certainly sounds like it could be a case of Jerusalem Syndrome."

Israel Police spokesperson Supt Micky Rosenfeld told the BBC the police were continuing to search for him.

"We know he was cycling from the north towards the south of Israel," he said.

"His belongings were found in the southern part of Israel in the Ramon crater, a huge open desert area.

"His bicycle and other personal belongings, including a tent, are still being examined."

Supt Rosenfeld said there was significance in a number of stones which had been moved in one particular area.

"There was also a number of pieces of paper with words written from the bible in his handwriting," he said.

"So we know down in the south was where he was last walking around, but at the same time we haven't ruled that out the possibility that maybe he left that area and made his way, into an open area maybe a Bedouin village."

Responding to claims Mr McAfee was suffering from 'Jerusalem Syndrome,' Supt Rosenfeld said: "It's known when individuals arrive in Jerusalem for spiritual reasons and continue walking around, sometimes with strange behaviour.

"Of course we are worried about him, but to say he is directly connected to Jerusalem syndrome, I wouldn't say that 100%, but taking into consideration the connection between the open desert area and possibly the fact that he was in Jerusalem, we are looking to see if there is some connection as to why he was out in the open area."

To try and trace Oliver McAfee, his friends and family have set up a Facebook page which you can find here.