The lightweight champion was named 'Most Admired Sports Star' in the 2016 Sport and Sponsorship Sentiment Index, which was compiled by PSG Sponsorship and Ignite Research.

More than 1,000 people were quizzed in the study, which investigated Irish people’s views of their sporting heroes and the effect of sport on the nation’s psyche.

McGregor finished sixth in 2014 and moved up to third place last year, but has topped the list for 2016 in a year which saw him become the first double belt-holder in UFC history.

2016 was also a great year for Ireland’s Olympic, Paralympic, rugby and soccer teams, who were also represented in the survey’s findings.

Ireland’s win over New Zealand in Chicago – their first ever triumph over the All Blacks – was named Greatest Sporting Achievement of the Year.

Joe Schmidt’s men were also named Team Of The Year, with Dundalk FC following in second after their surprise Europa League success story.

McGregor won the individual prize with 16 per cent of the vote, but Wicklow boxer Katie Taylor ran him incredibly close with 14 per cent. 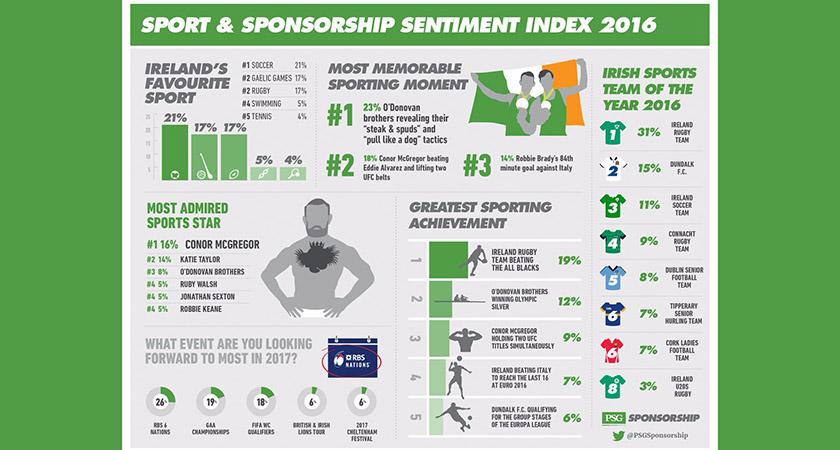 PSG chief Mick O’Keeffe said: “Conor McGregor really is the story of the 2016 research and he has propelled himself into the psyche of the Irish public, especially with the 18-34-year-old demographic.

“The O’Donovan brothers were relatively unknown heading into Rio 2016 but are now household names and extremely popular. There is undoubtedly seasonal bias, and major successes that happen earlier in the year tend to drift from people’s consciousness as the end of year approaches.

“There were so many sporting moments and highs and lows, from Robbie Brady’s winner versus Italy to Munster rugby’s emotional tribute to Anthony Foley. But more than anything, this year’s research illustrates that as a nation we are obsessed with sport and blessed with our sports teams and sports stars.”

2017 is set to be a much quieter year in Irish sport, and without any major events the RBS Six Nations was named the event fans were most looking forward to next year.