AN IRISH pub has taken the surprising step of banning Neil Diamond’s classic sing-along hit ‘Sweet Caroline’ from the venue during the pandemic.

Murphy's Irish Bar in Corralejo, Spain, seemingly took the unusual decision as part of a wider effort to help stop the spread of coronavirus across the region.

Last month, the World Health Organization announced there was evidence Covid-19 might be being spread by tiny particles of moisture capable of hanging in the air in enclosed or unventilated spaces.

Most people expel these droplets through sneezing, coughing, talking and breathing and would need to be infected and in close proximity to someone else for this to be of harm.

There is a school of thought that says that singing not only also expels droplets and aerosols from the mouth and nose, but also expels a greater quantity of droplets, due to the volume of the human voice tending to be louder when singing.

While karaoke isn’t prohibited, venues are required to take steps to ensure singers are at least three metres from any watching patrons while performing.

First released in 1969 by Neil Diamond and said to have been inspired by the daughter of US President John F. Kennedy, the song is a favourite of pub sing-alongs, karaoke or otherwise.

Pub goers in both the UK and Ireland have proven rather partial to Diamond’s dulcet tones on the familiar radio favourite.

Play it late into the night at any venue and you are likely to get a vocal response from the intoxicated customers present. 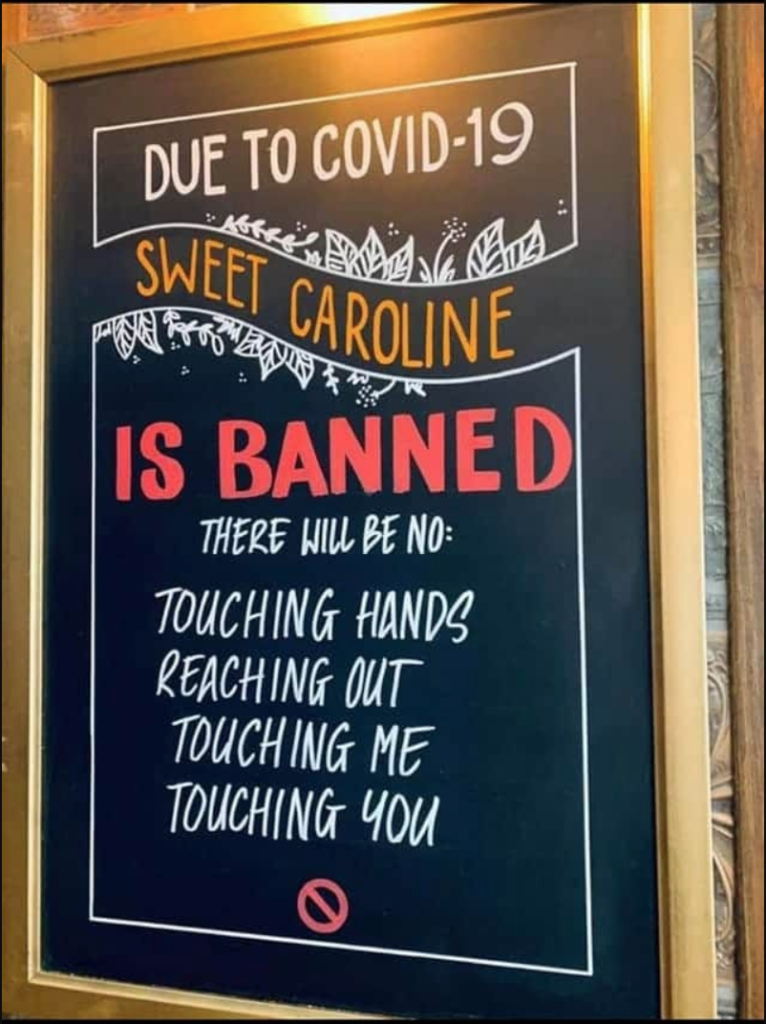 All of which goes some way to explaining the ban.

Ireland also has some previous history with this particular track.

In the early stages of the pandemic, a video surfaced on social media of a large crowd of people ignoring social distancing and other safety measures to gather together in a Dublin pub for a rousing rendition of the Diamond ditty.

It was widely condemned and prompted the government into action, with pubs across the country subsequently closed.

With lyrics like “touching you, touching me” it’s probably best the song doesn’t get an airing in the bold era of the “new normal” either.

Of course, the board warning of the song’s ban should be taken with a health dollop of salt.

The Irish are known for their sense of humour, after all.

Still, other pubs could soon follow suit with other songs potentially banned too.