Irish teenagers drink far less than their European counterparts, according to a new survey, but have an above average rate of illegal drug use

ALCOHOL use among 15 and 16-year-olds in Ireland is far below the European average, a new EU survey shows.

The results of the latest European School Survey Project on Alcohol and Other Drugs (ESPAD) further indicate that Irish teenagers are smoking much less than their European counterparts.

ESPAD also found a trend throughout Europe of smoking and drinking showing signs of decline among 15 and 16-year-olds across the continent.

Ireland did however display slightly higher levels of prevalence in three of the eight categories surveyed.

NPS substances include many so-called “legal highs” banned in the Republic in August 2010. 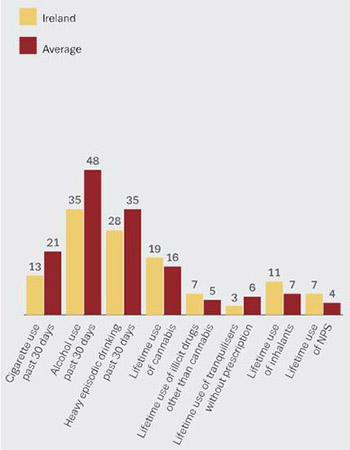 Ireland has banned all substances giving a “psychoactive effect” on the brain except for alcohol, nicotine and caffeine.

Despite the ban, there have been concerns that NPS substances have only become easier to obtain in Ireland thanks to the demand moving online, which the ESPAD results seem to corroborate.

The EPSAD project, which has been published every four years since 1995, surveyed 96,043 15 and 16-year-old students across 35 European nations.

The 2015 study included most EU countries, with Germany and Britain the two exceptions.

Alcohol Action Ireland have welcomed the findings, whilst emphasising that there is still a way to go. 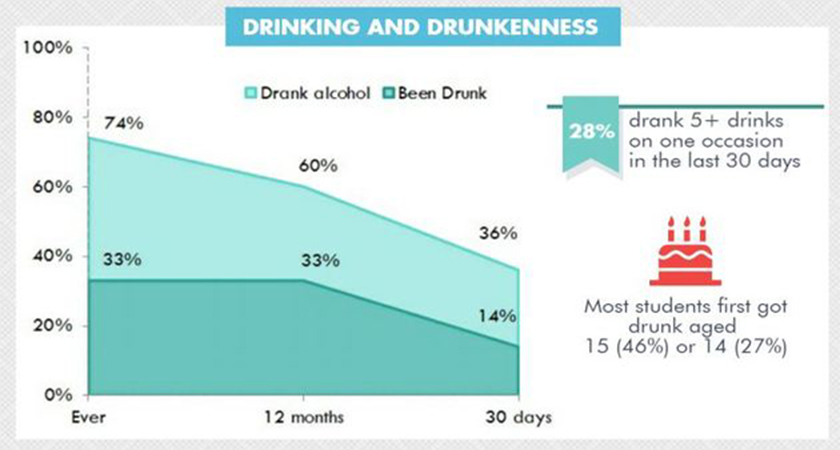 “The ESPAD survey shows some positive trends when it comes to alcohol consumption among Irish children, which are very welcome,” said Conor Cullen, Alcohol Action Ireland’s Head of Communications.

“However, it is important to remember that these are children and therefore we still have a long way to go in terms of protecting them from the large risks to their health and wellbeing from drinking alcohol at a young age.

“Three quarters of Irish 15 and 16-year-olds still find it easy to obtain alcohol, which is reflective of both the massive increase of the availability of alcohol in outlets throughout Ireland in recent years and the ongoing failure of the current regulations to protect children from alcohol harm.”

Some 77 per cent of the Irish teenagers surveyed said they found it “easy” to obtain alcohol, with four per cent more Irish girls admitting to finding alcohol easily purchasable.

Outside of substance abuse, the report found that “close monitoring” is needed of teenager’s gaming, gambling and internet usage, as its results showed that one in ten Irish students aged 15 to 16 gambled frequently.

ESPAD's report can be found here, while the Department of Health's report on the findings' implications for Ireland is viewable here.