“IS IT racist to talk about immigration?” About three years ago I listened in disbelief to the question that introduced a program on BBC Radio 4.

I looked out my apartment window at the street below. Half of the men and all of the women wore some form of religious clothing. The area didn’t look or feel British, but then again who’s to judge what’s British anymore?

I’m not even suggesting that what I observed was a bad thing; it’s just not what my Canadian wife and I expected when we decided to move to England from Toronto seeking an English adventure.

Our destination might have been Ireland, but there were no jobs in my homeland. England then, where my wife could work in the NHS and I could drink warm beer and write.

We arrived in Bradford, West Yorkshire, dreaming of Fish & Chips and local pubs. We had naively chosen our apartment off a map, the sole consideration being the distance to the hospital where my wife would work.

The debate continued on the radio, words carefully chosen. The consensus: it probably was a bit racist to talk about immigration. They weren’t saying it was racist to be anti-immigration; they were saying it was racist to even consider the topic worthy of conversation. It was in this climate that UKIP rose to relevance in British politics. They capitalised on the perception that the issues concerning the electorate were being ignored by a London elite that had long ago abandoned the North of England.

It should have been possible to have a reasonable debate about immigration, to steer the conversation towards how much Britain has benefitted from it, but I fear now it’s too late. The establishment played into the Far Right’s hands by portraying people as Union Jack carrying xenophobes simply for having concerns about how much their cities and towns were changing. 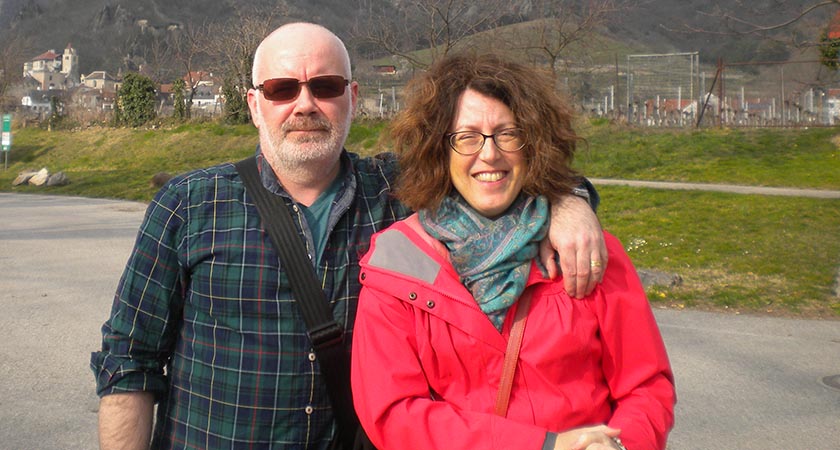 Author Noel Mooney and his wife Cindy Fedell , pictured while on holiday

I now live in an idyllic village half an hour from Bradford. The way I have been welcomed here convinces me these people are not anti-immigration.

There is, however, a palpable fear that English culture is under siege. Just three miles away sits Keighley, a town recently voted the least integrated in the UK. My neighbours fear our little village will follow, will become more multi-cultural at the expense of its Englishness.

This fear of change is being exploited by the Daily Mail and a cynical Leave campaign to conflate the area’s social problems as somehow related to EU membership, an EU membership my community will soon vote to terminate.

It’s not racist to talk about immigration, and Britain’s failure for years to have that conversation may trigger the biggest mistake in the country’s history.

My friends don’t even realise they’re voting to eject me. Last week a teammate showed up to our pool match wearing a Vote Leave badge.

He was shocked, embarrassed that I could think such a thing.

"I'm an EU immigrant. You're voting for me to leave."

Of course he didn't want me to leave. He’s not worried about me.

It’s the big bad scary immigrants he’s worried about, the benefits chasers, the sexual deviants, the terrorists… the ones found in the pages of the Daily Mail and hardly anywhere else.

I watch on in horror, worried that Britain will turn its back on the world. I’m even more worried that my right to live in a country I have come to love may be taken away from me.

And that’s why on Thursday, I’m voting for hope.