A MAN admitted to hospital with knee pain was left stunned after doctors discovered he was suffering from a rare condition that was causing his penis to turn to bone.

The 63-year-old first came to the Bronx’s Lincoln Medical and Mental Health Center in New York, after suffering a fall in the street.

Concerned that he might have suffered some broken bones, doctors decided he should undergo a pelvic x-ray.

It was then that they made the shocking discovering: his penis was turning into human bone.

According to a report published in Urology Case Reports, “an extensive, plaque-like calcification along the expected distribution of the penis was evident”.

The report noted that the patient had experienced some pain in his pelvic region but no other issues.

Incredibly, the unnamed 63-year-old left the hospital against medical advice and before the condition could be examined any further.

“The diagnosis of penile ossification along the entire penile shaft was suspected,” the study explains, adding that “no laboratory investigation, histological examination, or follow-up was done.” 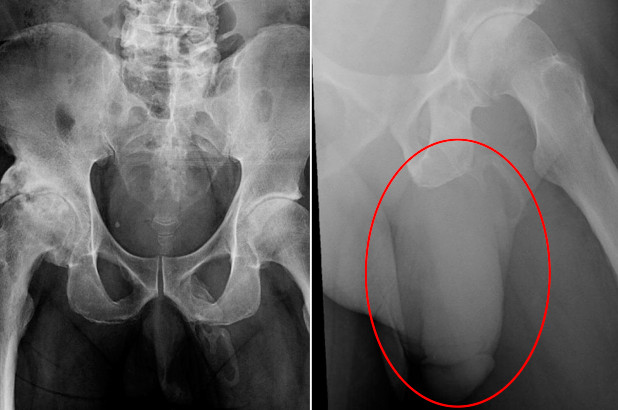 According to the researchers, this type of condition is “exceedingly rare” with few than 40 published cases on record.

Even then, most penises are only partially affected, with this instance being notable for the fact the entire penial shaft appeared to have undergone ossification.

Though the report does not name the man specifically, doctors noted he walked with a cane and had a history of alcohol abuse.

Most cases of penis ossification are linked to called Peyronie’s disease, a medical condition in which scar tissue develops inside the shaft of the penis, leading it to become inflamed and curved, resulting in pain and erectile dysfunction.

Other conditions like syphilis and gonorrhea as well as some forms of trauma have also led to bone cells forming in the penis.