NINE PEOPLE were rescued from Ireland's highest mountain yesterday afternoon after they became trapped due to perilous conditions.

As Ireland experiences a cold snap and dangerous, icy conditions, a total of nine people were rescued from Carrauntoohill in County Kerry yesterday.

Those rescued included a man who had become trapped in the 'Devil's Ladder' stretch of the MacGillicuddy's Reeks, being unable to either ascend or descend due to the icy conditions, The Irish Examiner reports.

The Kerry Mountain Rescue Team were dispatched to assist the climber, and as they were on their way to assist him, came across a group of three other people who had also become stuck.

As the rescue of the group and the single climber was underway, two other separate groups were also found needing assistance, and in total the Kerry Mountain Rescue team saved nine people from the range. 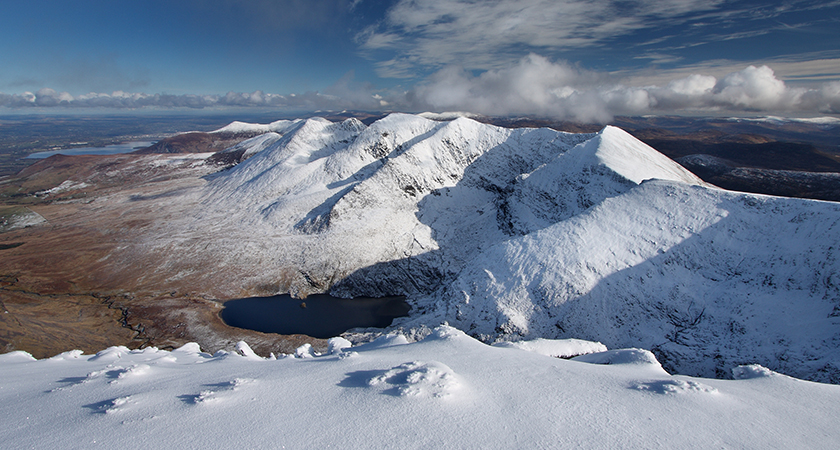 The climbing groups were rescued from Carrauntoohill in Co Kerry. (Picture: iStock)

Earlier this week, the Kerry Mountain Rescue Team had put out a plea for people to exercise extreme caution if tackling one of the county's mountain ranges, as due to Covid-19 restrictions there is limited support available.

In a statement, a spokesperson for the rescue service asked "all hill-goers to be considerate of the resources of the Emergency Services at this time by avoiding high mountain terrain such as the McGillycuddy’s Reeks, sticking to lowland paths and walkways while strictly observing social distancing principles and the 5km travel restrictions recently re-imposed by the Government.

"Given the current wintry conditions on the hills in Kerry, and recent observations by team members of extremely ill-equipped parties, we would also like to remind people who are considering venturing into the hills at this time to ensure they are properly equipped (including ice axe and crampons), have sufficient winter mountaineering experience and are complying with Government guidance on travel restrictions."