This week, former SNP Justice Secretary Kenny MacAskill and advocate of the ‘Offensive Behaviour at Football and Threatening Communication Act’, which is currently criminalising Celtic fans who sing Republican songs at football matches, has called for the Scottish Parliament to celebrate prominent Irish Republican James Connolly, who played a pivotal part in the 1916 Easter Rising.

Meanwhile, the Irish Consulate in Edinburgh recently hosted the official launch of the 1916 Rising Centenary Committee of Scotland in the company of representatives from the arts, sports, academia and a group of SNP politicians from Holyrood. Around the same time up the road in Glasgow, an SNP Councillor was reading out the Easter proclamation at another Easter Rising Commemoration.

As a West Belfast man and a student of Irish history, the Easter Rising holds a special place for me personally and historically so learning that the Scottish establishment is keen to commemorate this significant date in Irish history was music to my ears.

But as a life-long Celtic supporter something about the Scottish glitterati celebrating the actions of James Connolly and his socialist republican volunteers also struck me as spectacularly hypocritical. After all, I have spent the last four years of my life campaigning against the criminalisation of the songs and slogans about events like the Easter Rising when sang by Celtic fans.

The Offensive Behaviour at Football and Threatening Behaviour Communications Act which was introduced by the SNP in  2012  was designed to prevent  football supporters from expressing  any support for a political cause that might cause ‘offence’ to rival fans. Songs like 'Boys of the Old Brigade' and 'Roll of Honour' have been banned at football games and fans found singing or shouting slogans with similar sentiments face arrest, heavy fines and even prison sentences of up to 5 years.

While my main objection to these laws is the attack on free speech and civil liberties, I have always felt that the legislation brought in by the SNP was anti-working class. After all, no-one has called for a ban on the Flower of Scotland being sung at rugby games and no other sports were mentioned in the legislation.

In the run up to the introduction of the new laws, politicians and newspaper editors stirred up a moral panic over the behaviour of  football supporters, suggesting that  all Scotland’s political ills could be solved if Celtic and Rangers fan were brought into line. The laws are enforced with a huge panoply of repressive measures with police officers walking amongst the crowds during games filming fans who might dare to shout the wrong slogan or sing the wrong song.

The official celebrations by the SNP tend to prove my point.  It seems that quoting James Connolly at a drinks party in the Irish Consulate with the Scottish elite is fine but if you are a Celtic fan on your way to see your team it is a criminal offence that could land you in jail. 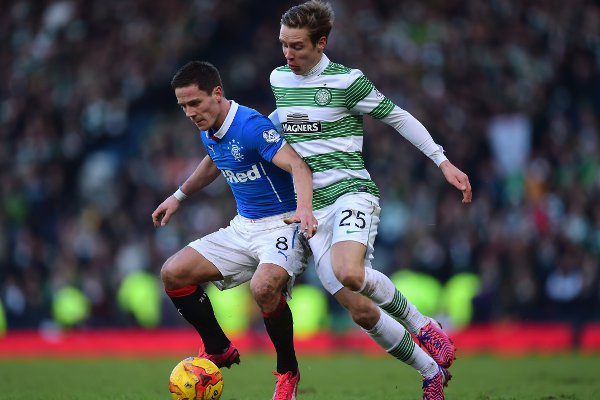 Many Celtic and Rangers songs have been banned under the Act. Picture: Getty Images

How did we arrive at the ludicrous situation where SNP politicians can celebrate the Easter Rising in Edinburgh and Glasgow yet the very same politicians criminalise Celtic supporters who do the same thing? This is hypocrisy of monumental proportions which needs to be challenged.

One of the many nasty side effects of this Scottish law was the way it turns rival football fans against each other.  Far from celebrating great victories or crying into our drink over football defeats. Celtic and Rangers fans took to social media after every game accusing rivals of breaking the new law.

Lip readers were used by the police to investigate complaints from fans who reported been ‘offended’ by the songs and slogans encountered at a game.  This pernicious and unpleasant side effect demonstrates that these laws did little to bring football fans together. But it also had the side effect of encouraging people to take ever more offence at songs and words they did not like.

In this context Celtic fans singing legitimate songs about their culture and the history of anti-imperialist struggle against British rule in Ireland was now redefined as sectarian and offensive by the new SNP law. Not surprising then that people who have been encouraged to take offence at every turn are now doing just that, even regarding the official celebrations at the Irish Consulate.

Ironically, one target is Glaswegian singer Eddi Reader who attended the Edinburgh event in memory of her great uncle Seamus Reader who played a leading role in the Rising.  A Twitter storm ensued with some people demanding Eddi return her MBE and accusing her of bringing shame on Scotland.  “Say No to Sectarianism”, ran another criticism condemning Reader, suggesting that those who wish to remember the Easter Rising are sectarian.

Apologists for the anti-working class legislation claim the laws were necessary to combat growing sectarianism in Scottish football. But it now seems clear many in Scotland do accept that marking significant historical dates in the Irish struggle against British imperialism is not a sectarian act.

As Eddi Reader said in response to her critics, “Only in Scotland can someone be offended by others wanting to acknowledge part of Ireland’s history”. Eddi is right but there is nothing in the Scottish character that is innately prone to complaint.  It is a trait that has been officially sanctioned and encouraged for many years by the SNP through their illiberal and intolerant football laws which increasingly appeared designed to criminalise Celtic fans who express sympathy for Irish republicanism.

In the months leading up to the centenary of the 1916 Rising, Scotland has an opportunity to think again about the offensive Behaviour Act.  With a different attitude Celtic fans could be at the heart of these commemorations and play a full part.  Celtic football club after all has a special connection to the events of Irish history with many of its fans being of Irish origin and having a historic association with support for the goal of a United Ireland even if Celtic football club are too defensive to officially admit it.

Eddi Reader also pointed out that it is wrong to assume that only Irish Catholics wanted social revolution.  She is right.  The leaders of the Easter Rising brought Catholics and Protestants together who above all wanted freedom.  Free speech for football fans and overturning these repressive laws would be one fitting tribute to this Centenary.

In the words of that great Celtic song, when it comes to 1916, free speech and Celtic fans celebrating their history- Let the people sing!

Kevin Rooney (51), originally from West Belfast, is a PhD candidate in the University of Liverpool. A London resident of 25 years, he is currently deputy head of sixth form at Queens' School in Hertfordshire.