POPE FRANCIS has showered the President of Ireland, Michael D Higgins, with praise after the pair met at The Vatican today.

The Irish President and Head of the Roman Catholic Church had their fourth-ever meeting today, The Irish Times reports, and if the Pontiff's comments are anything to go by, it went exceptionally well.

The outlet reports that, following the formal photocall between the two leaders, Pope Francis described President Higgins as a "wise man" who Ireland was lucky to have as its Head of State.

"Today, I did not just meet a man, a President, I met a wise man of today," Pope Francis said.

"I thank God that Ireland has such a wise man as its Head [of State]."

In a statement seen by The Irish Times, the Vatican said that President Higgins,  accompanied by Archbishop Paul Richard Gallagher, Secretary for Relations with States, met with Pope Francis and the Cardinal Secretary of State Pietro Parolin to discuss " various matters of mutual interest" including "such as migration and the protection of the environment".

President Higgins met Pope Francis in a private audience in the Vatican.

“There was also a joint reflection on the consequences of the coronavirus pandemic and the future of Europe, focusing finally on the theme of the strengthening of the peace process in the country."

President Higgins gifted a Bata Iascaire, or 'Fisherman's Stick' to the Pope, created from a local blackthorn stick taken from Inis Mór, the largest of Ireland's Aran Islands. 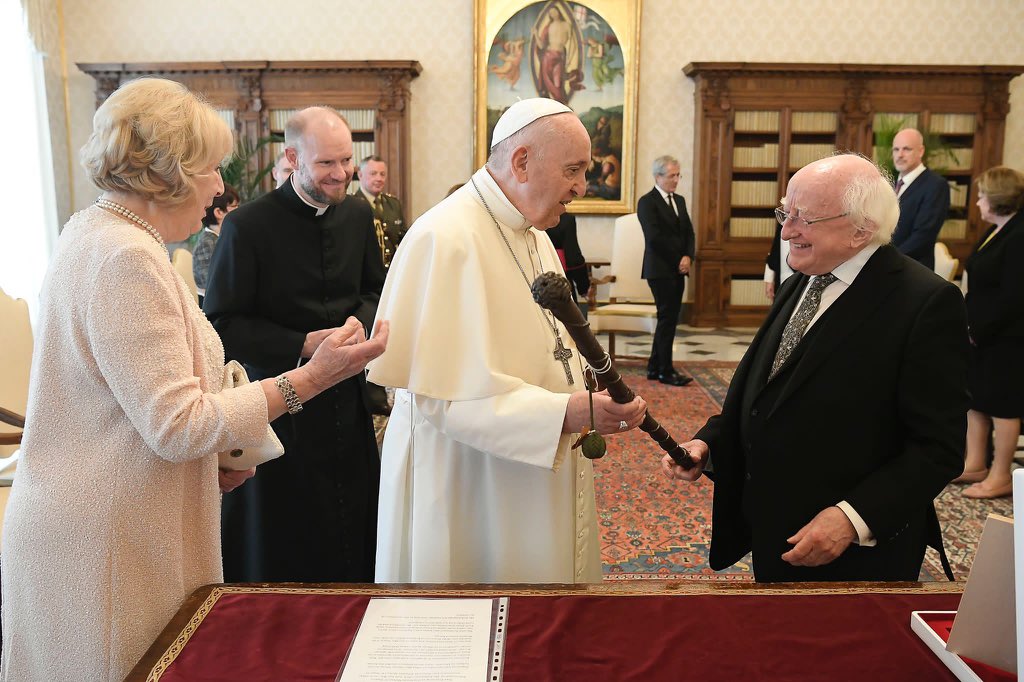 Pope Francis's praise of President Higgins come after the Galway native was forced to defend his decision to decline an invitation to an event alongside Queen Elizabeth in Northern Ireland to mark 100 years since its creation.

Speaking to reporters in Rome, where he is attending a meeting of the ‘Arraiolos Group’ of EU Presidents, President Higgins said the event had been supposed to be a religious service but had become "a political statement".

"What began as a religious service or reconciliation is now the celebrating, the marking, I think is the word used, [of] the partition of Ireland and the creation of Northern Ireland.

The title of the event, particularly the reference to 'marking "the partition of Ireland", had been "troubling" him for a "long while". 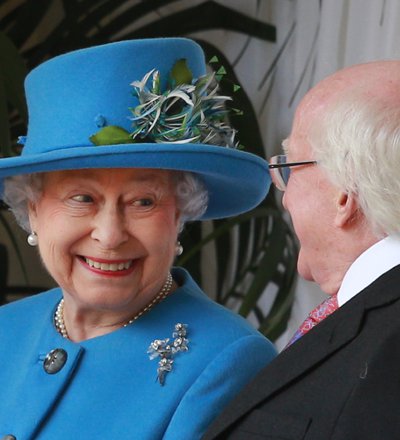 Queen Elizabeth II and President of Ireland Michael D Higgins at Windsor Castle on April 8, 2014 in England. This is the first official visit by the head of state of the Irish Republic to the United Kingdom.

"I am completely open to anyone in Northern Ireland of any Unionist tradition completely celebrating that in any way they like", he said, adding that "it's not the event itself" he has issue with but "in relation to which the event was titled".

President Higgins also took issue with how he was addressed in the invitation-- as the President of the Republic of Ireland.

President Higgins has attended multiple events in Northern Ireland, and has welcomed Britain's Queen Elizabeth and visited the United Kingdom for official events-- becoming the first-ever Irish President to do so.

You can read more here.