THE PRESIDENT of Ireland will not attend a church service with Britain's Queen Elizabeth to mark 100 years since the creation of Northern Ireland.

President Michael D Higgins has declined the invitation to the event in Armagh, due to take place at the end of October, which is being organised by the leaders of the island's two main Christian churches.

In a statement seen by RTÉ News, a spokesperson for President Higgins said that he is "not in a position" to attend the centenary event, and the organisers have been made aware of this.

He conveyed his best wishes to Britain's Queen Elizabeth and added that the President " has welcomed, and continues to welcome any opportunities to meet with her majesty and members of her family", having met her on multiple occasions previously. 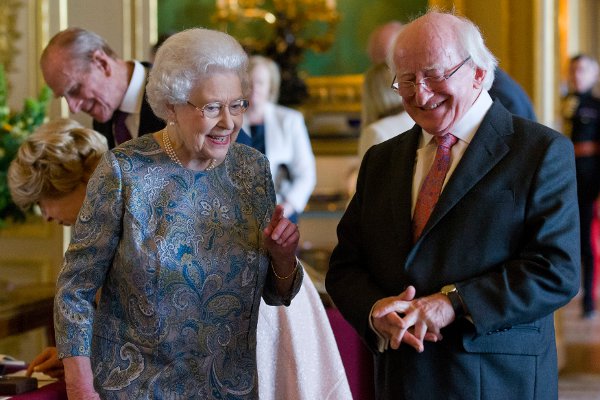 The Áras has not given a reason as to why President Higgins will not be at the event, which will be attended by the Catholic primate of Ireland, Archbishop Eamon Martin, as well as the heads of the Church of Ireland, the Presbytarian Church, the Methodist Church and the Irish Council of Churches.

The centenary of the creation of Northern Ireland marks 100 years since the partition of the island, when six counties in the north remained under British rule while the remaining 26 counties became independent and eventually became a Republic.

The Democratic Unionist Party (DUP) and Alliance Party have urged President Higgins to reconsider and attend the event, with DUP MLA Peter Weir writing to the president asking if he was "officially snubbing NI centenary events".

"Unionism has engaged positively and sought to use such events to advance reconciliation and peace", he said, adding it was "narrow-minded and deeply disappointing that Sinn Féin and the SDLP have vetoed almost every publicly funded initiative to mark Northern Ireland's centenary.

"They even vetoed the placement of a centenary stone in Parliament Buildings even though it was being gifted by unionist MLAs.

""For such high office in the Republic of Ireland to join Sinn Féin and the SDLP in boycotting centenary events speaks volumes about that country’s commitment to reconciliation and progress."