PRESIDENT MICHAEL D Higgins and his wife Sabina have arrived in Austria for an official two day visit.

While there, he  will have meetings with leaders at the federal and Vienna city level and will also participate in a number of events, including delivering a keynote speech, 'The Future of Europe – the Role of Culture', at the University of Vienna.

The visit is at the invitation of Federal President Alexander Van der Bellen, who's predecessor Dr Heinz Fischer visited Ireland in 2014. Minister of State for European Affair Thomas Byrne is also partaking in the visit.

At their meeting, the two Presidents discussed the invasion and humanitarian crisis in Ukraine and its implications for the future of Europe and multilateralism, neutrality and its past and future forms, EU enlargement, as well as the ongoing threat of climate change and the importance of global access to COVID-19 vaccines. 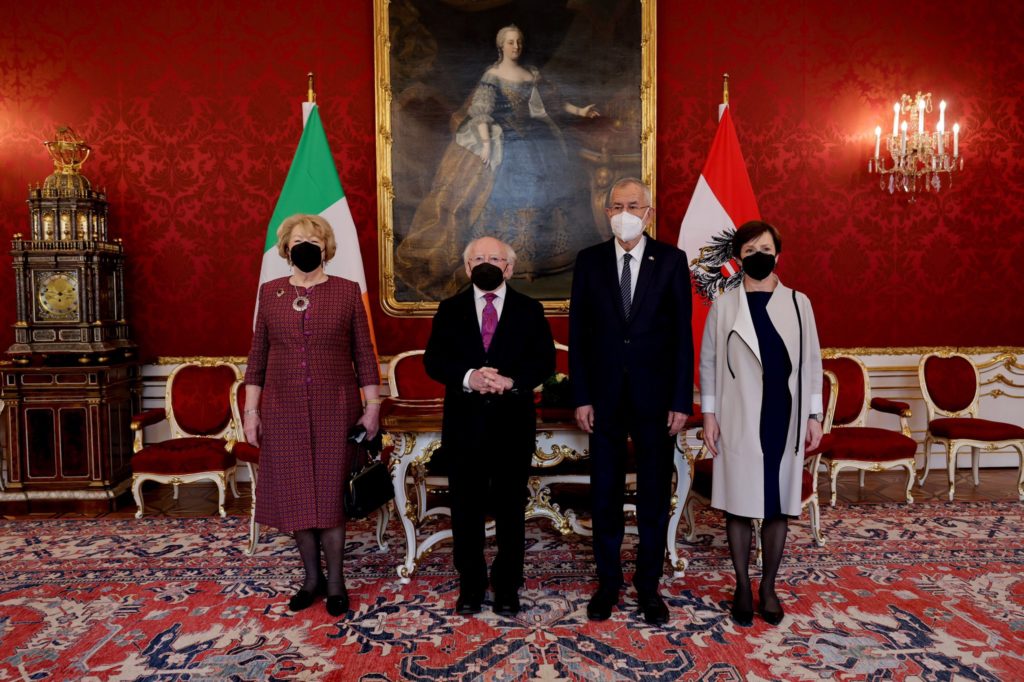 As part of the bilateral programme, President Higgins will meet with senior Austrian public representatives including the President of the National Council, Wolfgang Sobotka, Vice-Chancellor Werner Kogler and Minister for Foreign Affairs Alexander Schallenberg.

The President will also meet the Secretary General of the Organisation for Security and Cooperation in Europe (OSCE), Helga Schmid.

On Thursday, 7 April, the President’s keynote address at the University of Vienna ‘The Future of Europe – the Role of Culture’ will focus on the historical and contemporary relationship between the two countries, and the central importance of culture in addressing the challenges facing the future of Europe. The University is also the home of the Vienna Centre for Irish Studies.

Following the President’s address, he will be accompanied by the Deputy Mayor of Vienna, Kathrin Gaál, on a visit to Biotope City, the world's first official climate-resilient district. This visit will highlight the ongoing cooperation on sustainable living between Dublin City Council and Vienna City Council.

The final engagement will be at the Embassy of Ireland in Vienna, where the President will be the guest of honour at a reception for the Irish community, hosted by the Ambassador of Ireland to Austria, Eoin O’Leary. The Irish community in Austria currently numbers around 2,000, with a number working in the multilateral institutions  in Vienna.

The evening will include a cultural performance by acclaimed Irish violinist and composer Karen Murray, a champion of the virtuoso-violinistic interpretation of the typical Viennese as well as Irish and classical music tradition.