WASHINGTON, DC - MARCH 16: U.S. President Donald Trump (L) and Irish Taoiseach Enda Kenny acknowledge the press outside the West Wing of the White House March 16, 2017 in Washington, DC. Kenny and Trump are scheduled to attend the annual Friends of Ireland Luncheon at the U.S. Capitol. (Photo by Chip Somodevilla/Getty Images)

TAOISEACH Enda Kenny has met with President of the United States Donald Trump for the first time today in Washington.

The Taoiseach is in the US on a tour to mark St Patrick's Day.

The meeting is President Trump's first meeting with a leader of one of the 27 European Union states to remain in the EU post-Brexit.

Taoiseach Enda Kenny and President Trump posed for photos before continuing their meeting in the Oval Office.

After their meeting, the Taoiseach gave waiting reporters a debrief of their discussion.

"I've just had a very constructive and a very engaging meeting with President Trump and his team," he said.

"We had the opportunity to talk about the issues about Ireland, about the United Kingdom, about Europe, the relationship between Ireland and the United States, immigration and a number of other matters.

"I gave the President a detailed account of the outcome of the elections in Northern Ireland, the fact that it's a priority to put together an Executive that's a voice for Northern Ireland and the fact that I have an agreement with the British Government that there will be no return to a hard border and no direct rule brought back by London."

The Taoiseach also said he gave the President "a vey clear understanding" of the Northern Irish borders of the past. 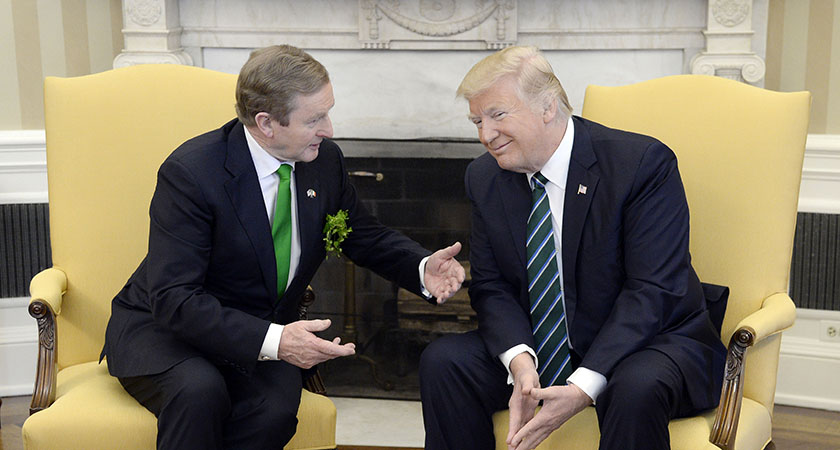 The Taoiseach and President posed for photographs before their Oval Office meeting. (Picture: Olivier Douliery-Pool/Getty Image)

He also said that he knows there's "concern and anxiety" amongst undocumented Irish with criminal misdemeanours in the States and he advised that they "clear these up" with legal representation.

The Taoiseach said both he and President Trump "have pledged to work together with the American Administration and European Union in respect to issues of immigration."

Mr Kenny also said he invited President Trump to come to Ireland and said, "[The President] hopes to do that during the course of his presidency."

Speaking to a reporter from RTÉ News, Mr Trump said he was planning to visit Ireland during his term in office and said that he loved Ireland.

"Absolutely, I love Ireland, I'll be there for sure," he said.