Danny aged 2 is pictured enjoying the festivities at the Foyle Maritime Festival on the River Foyle.

TENS OF thousands of people flocked to Derry~Londonderry yesterday (Wednesday) as the internationally acclaimed Foyle Maritime Festival officially got underway.

The festival, which coincides with the return of the Clipper Round the World Yacht Race to the city, has grown into a major attraction which generates millions of pounds for the local economy.

With over 95% of the city’s hotel beds booked until Saturday night, over 150,000 people are expected to attend this year’s festival which continues until Sunday July 24.

The riverfront has once again been transformed into a bustling international marina with maritime markets and a celebration of the very best food and drink the North West has to offer.

With a jam-packed programme, the free-to-attend festival, includes live art and animation installations, virtual reality experiences, acrobats, animated performers and an array of water sports such as kayaking and stand-up paddle boarding which gives participants a unique view of the city from the River Foyle.

Live music performances are taking place on the Festival Village stage along with riverside family activities including workshops, funfair attractions, the Foyle Bubble Challenge, boat tours and street theatre. In addition, a number of majestic Tall Ships have anchored in the Foyle, with some visiting Northern Ireland for the first time.

This year’s festival reaches its pinnacle on Friday with a magical evening of music, dance and theatre culminating in the mesmerising Parade of Light on the River Foyle against the backdrop of an awe-inspiring pyrotechnic display. 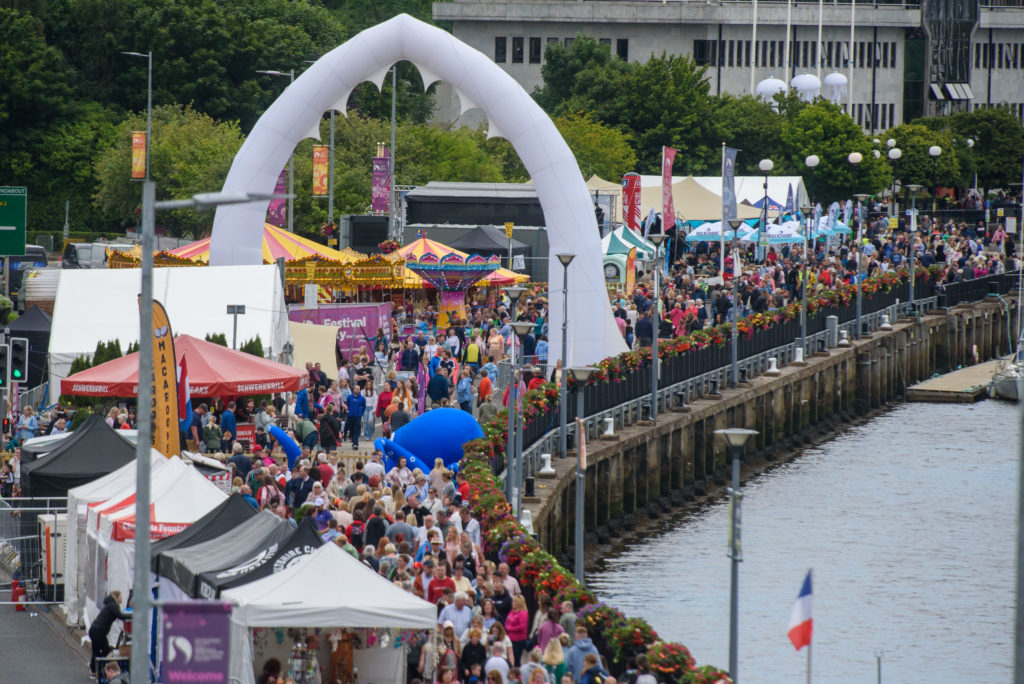 The Foyle Maritime Festival which as officially opened and is expected to draw around 150,000 visitors according to Visit Derry as the five-day extravaganza, from July 20-24, will see the riverfront once against transformed into a bustling international marina with maritime markets and a celebration of the very best food and drink the North West has to offer. The centre piece of the event is the Clipper Round the World Yacht Race fleet which are berthed on the River Foyle as the city welcomed the amateur cares for the fish time.

Festival and Events Manager, Jacqueline Whoriskey said she is delighted to see such strong visitor numbers for the start of the festival.

“There has been real anticipation in the city for this year’s festival and of course the return of the Clipper crews," she said.

“With so much to see and do across all days, we are confident this year’s Foyle Maritime Festival can be our best ever, and it even looks as though the sun will shine for us.

“It is the perfect festival for family fun, and I would encourage everyone to make their way to the city over the next few days, you won’t be disappointed.”

A central focus of this year’s Maritime Festival is the plight of the world’s oceans and seas and there are educational elements revealing the damage which is being inflicted by mankind and the steps we can take to be more environmentally friendly.

The theme of the festival is ‘What Lies Beneath’ and it is a celebration of the beauty and splendour of our seas, oceans and waterways and the ecosystems of life they support.

Visitors are also being encouraged to pledge a commitment to being more eco-friendly in their daily lives so the festival can have a lasting positive impact on the environment.

Lowering the curtain on this year’s festival will be the Parade of Sail on Sunday 24 July, as the Clipper fleet takes to the sea to embark on the final leg of their mammoth journey and head for the finishing line in London.

Visit Derry Chief Executive, Odhran Dunne said the festival is an excellent way to attract people to the city, some for the first time.

“Derry is the perfect gateway to the North West with beaches, rugged coastlines and beautiful countryside to discover within the region," he said.

“It is always pleasing when people visit the city for the first time and then discover there is so much more to this part of the world than they thought. It is the perfect reason to keep on returning.”

Book of condolences to open for drowned teenagers in Derry