Two arrested, 12 fined as groups travelled from across the country for sulky race

Gardaí in Kildare stopped five men who were 'well outside' their 5km radius and attempting to race sulkies on the N9. (Image: Kildare Garda Division)

TWO PEOPLE have been arrested after people travelled from across Ireland to watch a planned sulky race in County Laois.

Gardaí in the Portlaoise area have confirmed that two men were arrested and a further twelve people issued with fines after a planned sulky race drew hopeful spectators from across the country.

A spokesperson for Gardaí in the Laois and Offaly areas took to social media yesterday where they wrote that officers stopped a group of males on the N77 Portlaoise to Abeyleix Road that morning.

Upon speaking to the males, they learned that many of them had travelled from counties Waterford, Cork and Limerick-- some up to 170km away-- in order to attend a sulky race.

Two of those present were arrested for Road Traffic Offenses, the Garda spokesperson confirmed, and 12 more were issued with Fixed Charge Penalty notices for breaching public health measures and travelling further than the allowed 5km.

"This is not essential travel," the spokesperson wrote, asking everyone to stay at home, stay safe and keep others safe.

Gardaí in County Kildare tackled a similar situation recently when officers stopped five people who were attempting to race sulkies on the N9. 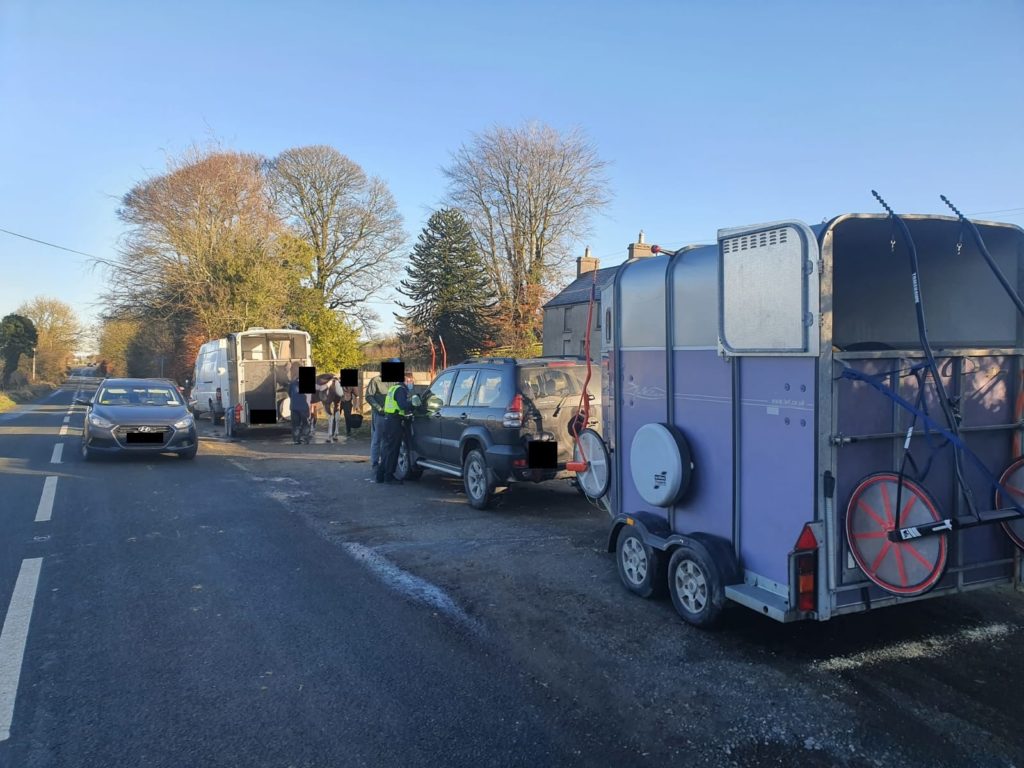 Gardaí in Kildare stopped five men who were 'well outside' their 5km radius and attempting to race sulkies on the N9. (Image: Kildare Garda Division)

According to officers, Community Gardaí and detectives from Athy spoke to the men involved and found them to be "well outside 5k".

Those involved were issued with fines and a spokesperson again reminded the public that sulky racing is "not essential travel".

Ireland continues to have high rates of transmission despite a drop in cases since the beginning of the year, and the Government have said they expect some restrictions to remain in place for up to six months.

As of now, the public are told to remain within 5 kilometres from their homes unless for essential reasons such as caring for an elderly relative, food shopping or travelling for work which cannot be done from home.