IRELAND INTERNATIONAL James McClean has slammed the people involved in the viral video that mocked the death of Michaela McAreavey.

A viral video made its way around social media showing a chant being sung at a function with Orange Order banners appearing to be visible in the background.

The video sparked condemnation from several high profiles on both sides of the political aisle. These included the likes of Arlene Foster, Ireland's Taoiseach Micheál Martin and the likes of James McClean. 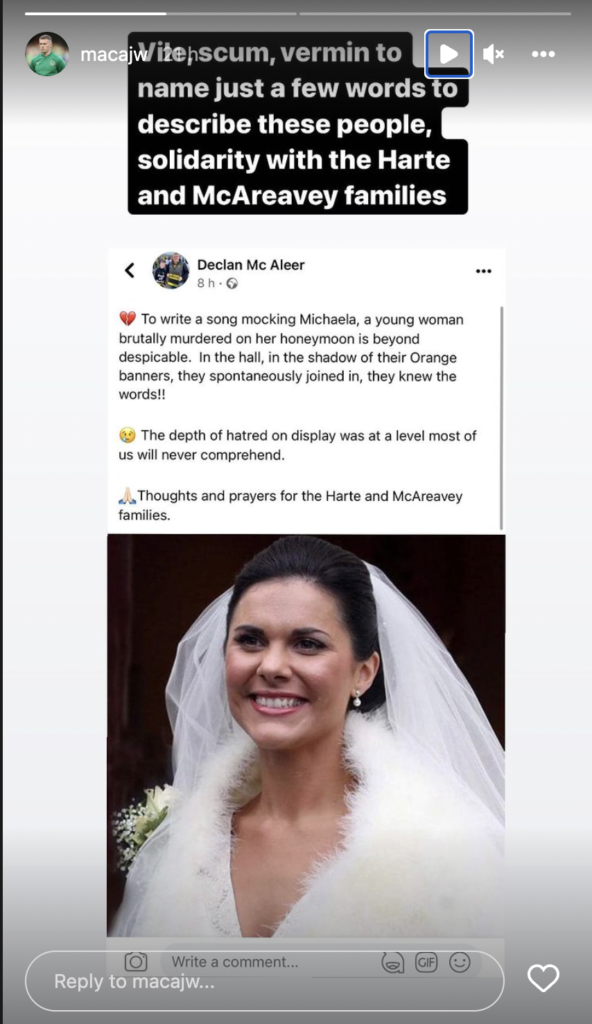 McClean shared a post on his Instagram saying: "Vile, scum, vermin to name just a few words to describe these people, solidarity with the Harte and McAreavey families."

Two men involved in the video have apologised for their actions and the hurt caused by lyrics which mocked her brutal murder while on honeymoon in 2011.

Yesterday a coach from Linfield FC  was sacked after it was found out by the Belfast club that he appeared in the video.

A club spokesperson said immediate action had been taken against the person identified.

"The coach in question has been contacted and notified that his voluntary association with the club has been terminated with immediate effect," a club statement read.

The widower of Michaela McAreavey also shared his feelings on Twitter and issued a message saying: "Michaela was a vessel of love, courage and dignity. Hate can hurt, but never win.”

Michaela was a vessel of love, courage and dignity.