Keane and McCarthy after the 2001 victory over Holland that sealed a World Cup playoff place (Image: Lorraine O'Sullivan/INPHO via Getty Images)

ROY KEANE has opened up about his infamous fall-out with Ireland boss McCarthy at the 2002 World Cup.

In an interview with former Manchester United teammate Gary Neville, Keane spoke about the background to the furore, which saw the captain leave the Ireland camp in Saipan before the tournament.

Speaking on Neville’s The Overlap YouTube channel, Keane recalled how he and McCarthy initially clashed in an incident in the USA in 1992.

'That was the start of it'

The young midfielder had been taken under the wing of senior players such as Packie Bonnar, David O’Leary and Andy Townsend.

However, according to Keane, McCarthy had barely spoken to him.

That was until Keane, then aged 20 and with only two competitive caps, was allegedly berated by McCarthy for turning up late for the bus to the airport after going drinking following the US Cup friendly tournament.

"Jack Charlton was having a go, Jack's the manager, but I didn't want a player having a go at me who's never spoke to me," said Keane.

"If Packie Bonnar or Dave O'Leary, who probably helped me, were saying, 'Roy, you know…', yeah, I'll take that.

"But not from somebody who’d never spoken a word to me and he was shouting at me in front of everybody, so that would have been the start of it."

Ten years later and with McCarthy now manager, Keane was shocked by the facilities that greeted the Ireland squad when they arrived in Asia, despite the FAI having had six months to prepare.

"We qualified out of an unbelievably tough group," said Keane.

"Holland never qualified out of our group and we're going there and people are going, 'but there's no gear, there's no gear at all, no footballs, no bibs, nothing'. 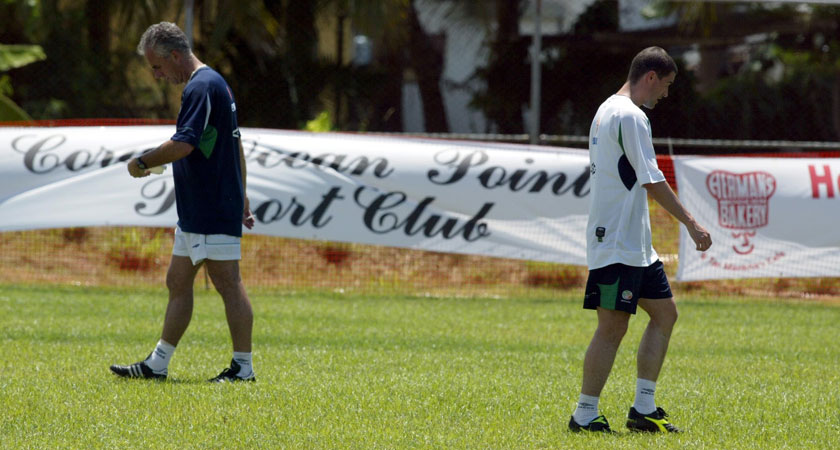 McCarthy and Keane in Saipan shortly before the latter left the Ireland camp (Image: Andrew Paton/INPHO via Getty Images)

"People we’re going, 'is it money?' You'd have had Irish fans borrowing money, selling their television to go and follow Ireland, but they still want to see Ireland winning, I don't care what anyone says."

The final straw for Keane came in a showdown in front of the squad when McCarthy, according to Keane, accused him of ducking out of the second leg of Ireland's playoff with Iran six months earlier.

Keane, who claims he was injured, had played in the first leg and also played in all 10 of Ireland's qualifying games in a group that included Holland and Portugal, scoring four goals.

The pair have since appeared to make peace, shaking hands ahead of a game between Keane's Sunderland and McCarthy's Wolves in 2006.

They reportedly spoke via telephone before the game, setting aside their differences.

'I should only answer to my dad'

Also in the interview, Keane explained he doesn't have an issue with authority, but does expect respect.

He cited a clash with Sunderland owner Ellis Short, when the US businessman had told the then Mackems boss to move to the North East.

"I felt — and I'll go back to the way I left United, even with Ireland — I think if people speak down to me or show me a lack of respect, it does irritate me.

"When I look back at my differences with other managers, I really feel I should only answer to my dad, I shouldn't be spoken down to by Ferguson or McCarthy."

You can check out the full interview with Gary Neville on the Overlap podcast by clicking here.