AN apocryphal yarn gets shared within film-buff circles about the Beach Boys’ maestro Brian Wilson.

In 1966 John Frankenheimer’s chilling parable Seconds was released, all about identity reassignment. About fifteen minutes into the movie a man named Wilson (John Randolph) visits an eerie clinic and is greeted with the words: “Ah, there you are, Mr Wilson.”

Well, so the yarn goes, the mentally traumatised Brian Wilson went to see Frankenheimer’s film but was late for the start of the screening. It’s said that when he took his seat the first words he heard coming down from the screen were: “Ah, there you are, Mr. Wilson.”

With rich material like that it’s surprising that it’s taken until now for a biopic of Brian Wilson to appear.

But Love and Mercy, starring John Cusack and Paul Dano, attempts to portray the life of arguably pop-music’s greatest survivor. Shifting the focus between the 1960s (with Dano as Wilson) and 1980s (with Cusack as Wilson), the movie depicts the flowering and withering of a creative genius.

Within those time-frames viewers witness Wilson trying to cope with the pressures of fame. These pressures are not eased at all by the abuses of his father Murry (Bill Camp), or the bullying of his doctor Eugene Landy (Paul Giamatti).

The pop-music biopic is a sketchy cinematic sub-genre, often failing to add much to the subject’s already larger-than-life persona. Where Love and Mercy succeeds is in viewing an icon not in his pomp but in decline. 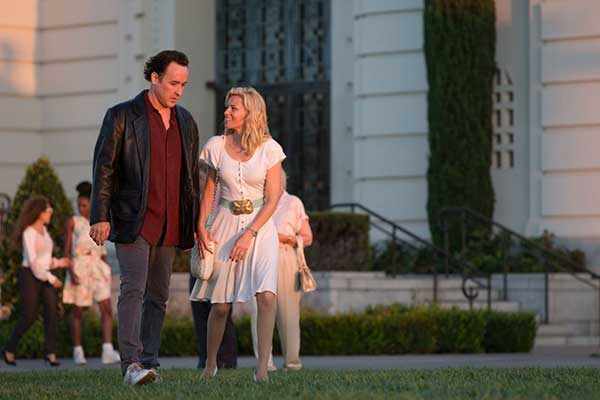 The extraordinary Wilson is shown as all too ordinary. This is beautifully realised in the scene where he meets car saleswoman Melinda Ledbetter (Elizabeth Banks), later his wife and perhaps, the narrative suggests, his saviour. Wilson’s lyric, “God only knows what I’d be without you,” rings ever poignant.

Another strength for the movie is in showing the Beach Boys developing their distinctive harmonies. Wilson records real barking dogs for the breakthrough album Pet Sounds, pondering: “Could we get a horse in here?” In truth, Dano’s gawkiness makes him the more convincing Wilson than the handsome Cusack. But no actor could ever fully capture Wilson’s delicate complex.

Love and Mercy is in cinemas now.