FOR MANY it was the late, great Johnny McCauley who forged the genre known today as ‘Country and Irish music’. The genial Derry man is regarded as one of the greatest songwriters of all time.

As I prepare for my weekly BBC Irish radio show, I often reminisce about the showbands and ballrooms that were so prevalent in Ireland in the 1960s. I find nostalgia and Country and Irish music an intoxicating mix.

It can instantly take me back to a rollercoaster of ballrooms, parish halls and marquees. Over the years, I have grown to enjoy many other types of music, but my first love — Country and Irish — continues to hold a special place in my heart.

The Country and Irish music scene in the 1960s was a remarkable period in Irish life when showbands epitomised glamour and generated mass hysteria among its followers.

Towards the end of the ’60s, the showband era declined — the music scene slowly taken over by a new breed of entertainment; the Discos. At the time, gossip columnists enthused about its arrival, as the image of the smartly suited showband stars were perhaps a little sentimental for the less innocent era of the swinging ’60s.

This was a sad passing, as the music was designed for one purpose, dancing (jiving and ‘Irish’ style waltzes).

Looking back with rose-tinted glasses, those days, with their breeze block buildings known as ballrooms, were the forum for a bizarre courting ritual — men on one side of the room and women on the other, each eyeing one another up, more in suspicion than hope!

The greatest dread, the ultimate humiliation, was to cross the floor, known as ‘no man’s land’ and be refused a dance. Many a time I was halfway across the floor, only to lose the nerve at the last minute and swerve towards the men’s toilets.

Success brought the chance to meet the girl of your dreams; rejection brought you back to your mates with tail between your legs, and the old excuse, “I didn’t fancy her anyway”.

When we were down on our luck, the balcony was our sanctuary; we could view the talent and keep a check on who was making headway with whom.

The prettiest girls were inevitably snapped up by the smooth-talking city boys; the not so pretty stood patiently like wallflowers pretending not to care.

Although I feel a tinge of sadness now this era has gone, I take comfort knowing a new generation of country singers has arrived. 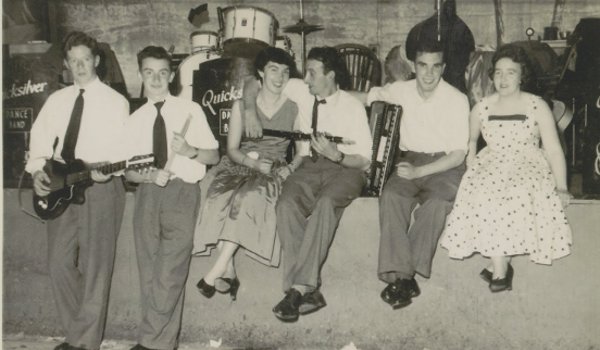 Nathan Carter and Derek Ryan epitomise the rich vocal and instrumental style, and both possess a distinctive nasal voice ideal for the lachrymose ballads in which they specialise.

They are only two of the new breed of country singers popping up everywhere, most of which are in the enviable and well-deserved position of being able to pick and choose their dance dates.

With the demise of the old style ballrooms and marquees, the dancing scene moved towards hotels. This has led to the emergence of Country Music Weekends, which are often so popular they are held in seaside holiday venues in Britain, Ireland and further afield.

As well as the old favourites, in the coming weeks I’ll be touching on how Nathan Carter sought my advice on his first steps to stardom, and looking at new releases, and new faces, from the Country music scene.