Presenter Tessa pictured with the adorable Skye for the new series

A NEW series of Peataí!, an Irish language series on pets and their care, continues this month.

Presenter Tessa Fleming, along with a team of experts at the Ark Farm in Newtownards, Co. Down, meets everything from a hairless dog to a tarantula, a one-eyed hamster and Sir Lancelot, a goat that evidently needs to be taught some manners — in Irish, English or Goatish.

With the rise in pet ownership over the last year, more people have been welcoming an assortment of animals into their homes. 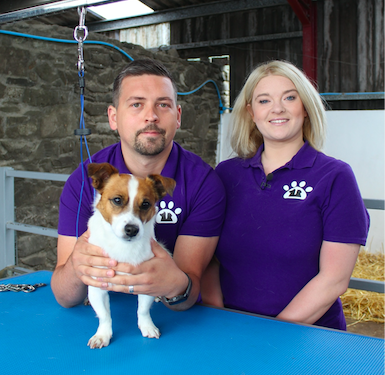 Top tips are on offer for looking after your furred friends

Ellen meets a bearded dragon, a lame Labrador and a hungry Hermann’s tortoise, while groomer Paul tries his hand soothing a terrier who isn’t keen on water.

Behaviourist Paula has plenty of advice for new puppy owners and tips on how to deal with the boisterous behaviour of a springer spaniel.

There will also be special emphasis on rescue animals in the fifth episode as the team looks at the challenges facing pet owners as animals are surrendered.

The new series of Peataí! is made for BBC Gaeilge and RTÉ by Big Mountain Productions with support from Northern Ireland Screen’s Irish Language Broadcast Fund.

Broadcast on Monday nights on BBC Two Northern Ireland, at 10pm, the programme is available in all parts of the UK via the BBC iPlayer

To receive BBC Northern Ireland on the iPlayer scroll down to the bottom of the page until you get to the CHANGE LOCATION box.