DUSTY Springfield was a diva. She was also one of the best female singers Britain and Ireland has ever produced, and her legendary, haunting, soulful sound has inspired a generation of music including artists like Adele and Amy Winehouse. Her fierce intelligence, musical knowledge and stance against racism and injustice often brought her into conflict with the chauvinistic old-fashioned music industry of the time, while her struggle with her sexuality and misdiagnosed bipolar disorder meant she endured many hard times — and left her at one stage practically penniless. Here are 15 essential facts about Dusty…

Dusty Springfield was born Mary Catherine Isobel Bernadette O’Brien in London on April 16th 1939, to an Irish mother and a Scots-Irish father. Her mother Kay was born in Dublin, and grew up in Tralee, and Dusty’s grandfather, Maurice Patrick Ryle was a prominent journalist who edited the Irish Independent and Evening Herald in the 1920s. He was well-known ‘Redmonite’ campaigning for Home Rule, but he died in 1935, four years before his granddaughter was born.

2. She gave herself a makeover aged 16

Dusty was an un-prepossessing teenager at St Anne’s convent school in Enfield, with short auburn hair and thick glasses. Although she credited it with her first ‘blues’ performance in a school assembly, she quickly shed the persona of Mary O’Brien after she left at 16, and shocked school friends a year later when she appeared as a glamorous and fully-made up blonde. “Mary O’Brien” she said, had been destined to become a librarian and “wasn’t going to make it.”

3. Her childhood was less than perfect

Despite visiting her parents regularly as a young performer, and even taking them on tour with her to the United States, Dusty later she said she had a very unhappy childhood. Her parents were trapped in a loveless marriage, and her father was strict disciplinarian who would hit her. They gifted her, however, with a deep love of music: Dusty often whiled away the afternoon watching musicals in the cinema with her mother, while Dusty’s father Gerard O’Brien was a talented pianist who loved classical music and blues. 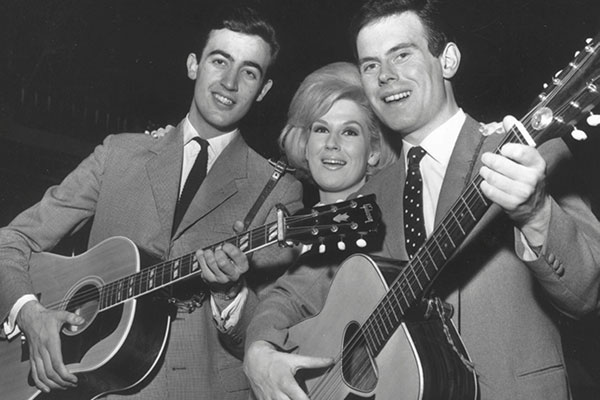 4. Her first stage name was Shan

Dusty’s first stage name was ‘Shan’ when she joined the all-girl singing trio the Lana Sisters in 1958. Dusty had already been singing with her brother, Dion, in small clubs in London, but joining the Lana Sisters was her first big professional break. They recorded the songs Tell Him No and Seven Little Girls (Sitting in the Back Seat). “We didn’t have hits but we did have records,” Dusty recalled. Tutored by the experienced leader of the group, Riss Chantelle, Dusty had a record contract, appeared on the BBC, toured professionally and sang as a support act for Nat King Cole.

Her career really came into being on a spring day in 1960 when Dusty agreed to be a founding member of the hugely successful group, The Springfields with her brother Dion, who changed his name to Tom. For three years The Springfields were one of the biggest groups in Britain and Ireland, with hits including Silver Threads and Golden Needles. Although Dusty later said the group achieved their folksy pop-style by smiling and “Being cheerful, and jumping and down”. Mike Hurst, who later joined the group in place of Tim Feild, remembered Dusty and Tom for their rigorous professionalism, and hours of rehearsals. Dusty always said she disliked their most famous song Island of Dreams, complaining that she sang flat.

6. She had an oddball sense of humour

Even in the early days, Dusty had a whacky sense of humour, and a fearsome temper. Mike Hurst from The Springfields recalled Dusty prompting him to throw a tea tray full of cups on the floor, in annoyance at a shared bill with her former group the Lana Sisters — ruining their performance. You couldn’t really be angry with her, Riss Chantelle, said, as Dusty was often like a child — and Riss remembered Dusty papering her sister’s hallways in toilet paper, and appearing on stage with the Lana Sisters with ripped trousers.

7. She wanted to make people dance

In November 1963, Dusty released her first solo record, I Only Want To Be With You which was originally written by Ivor Raymonde and Mike Hawker for Hawker’s then wife, Jean Ryder. Inspired by the success of the The Twist and Dancing in the Street, Dusty wanted her first single to be a song that people could dance to and she had already rejected Money (That’s What I Want) and Wishin and Hopin’. Jean Ryder, who went on to work as a backing singer for Dusty for many of her early recordings and performances, remembered her shy, insecure nature, as well as a musical perfectionism that often brought her in to conflict with male session musicians and the chauvinistic record industry. 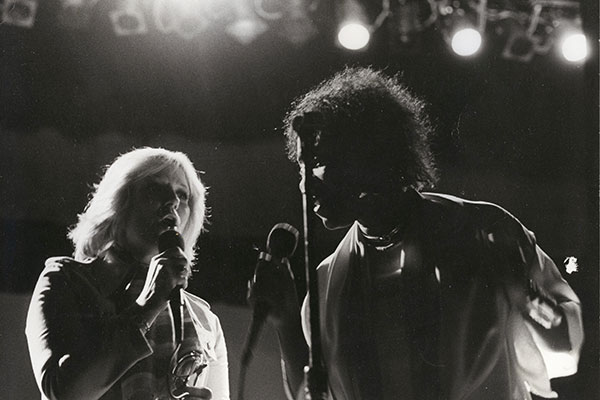 Dusty on stage with Patti Labelle, a moment of delight in the dark times of the 1970s (Photo: Sue Cameron)

8. She was insecure about her looks

With her instantly recognisable blonde beehive, black eye make-up, cool glamour and trade-mark hand gestures Dusty quickly became a Sixties icon and was adopted by the Mods, after her early appearances as a compere on Ready, Steady, Go! on which she interviewed, amongst others, The Beatles. Despite her status, Dusty was inherently shy and rarely attended the popular parties and nightclubs of the 1960’s. She remained deeply insecure about her appearance, hating her knees and chin — often complaining that she thought she looked like Burt Lancaster.

9. She loved the blues

From her early years listening to the Blues with her father, Dusty loved Black American music and she was one of the key people to introduce Motown to Britain. She had performed with many Motown stars at the Brooklyn Fox in New York, and struck up a close friendship with Martha Reeves. Dusty later hosted the Motown Revue on British television — and was kicked out of Apartheid South Africa for being the first white artist to refuse to play to segregated audiences.

10. She only had one number one

Although she recorded such classics The Look of Love, Goin’ Back and I Close My Eyes and Count To Ten Dusty only had one number one hit — You Don’t Have To Say You Love Me which she first heard sung in Italian at the San Remo song contest. The English lyrics were then hastily written by Dusty’s friend, and later manager, Vicki Wickham and Simon Napier-Bell.

11. Her best album was a troubled one

Dusty’s most classic album, and perhaps her finest contribution to music, was the 1968 recording, Dusty in Memphis. Yet it was a troubled album, with Dusty partying hard and unable to perform at the studio in Memphis, saying she was too intimidated to sing in the same space where Aretha Franklin had sung some of her biggest hits. Dusty later recorded her vocals in New York, but the album was not a commercial success despite producing the classic single Son of a Preacher Man.

12. When things were bad, they were very bad

In the early years of her career Dusty remained a practising Catholic, often stopping the tour bus to go to Church or confession. As the Sixties wore on, however, Dusty lost her faith and began a long struggle with alcoholism, self-harm and bipolar disorder. Her move to California in the early 1970s only exacerbated the problem and her career soon stalled, leaving her short of money and without her familiar support network that had been the mainstay of her life in London. By the early 1980s Dusty was practically penniless and spent frequent spells in mental hospitals. 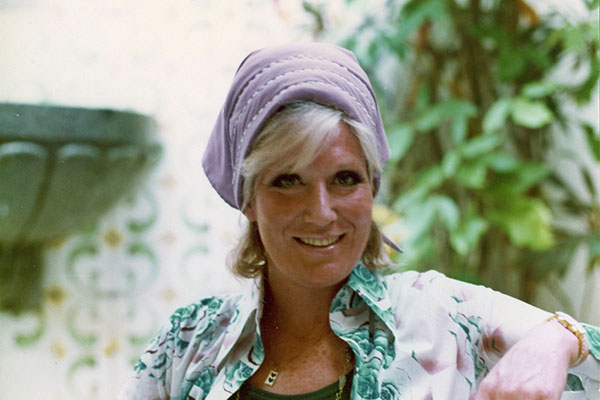 13. She struggled with her sexuality

In 1970 Dusty used a magazine interview to reveal that she was bisexual — or as she put it – as likely to be swayed by a girl as a boy. In fact she was gay, and never had any significant romantic relationships with men, but she struggled to come to terms with her sexuality and often regretted giving  an interview which led to comment and speculation for the rest of her life. Dusty’s long-term partner in California recalled that Dusty had once kissed her on a balcony overlooking the Vatican in defiance of their faith.

Dusty’s comeback with the Pet Shop Boys in the late 1980s nearly didn’t happen as, by then, she was reluctant to perform and endure more disappointment. Her recordings with the group propelled her back to the top of the charts and, combined with her hard-earned sobriety, ushered in a more peaceful part of her life when she returned to England and lived by the river outside Henley-On-Thames.

15. She wanted her ashes to be scattered in Ireland

Dusty discovered she had breast cancer shortly after recording her last album, A Very Fine Love in Nashville in 1994. Although she received treatment, the cancer returned and she died in March 1999 in Henley. In her last interview with the New York Times, Dusty revealed that she would be very happy if her life took her back to Ireland, and her brother Tom scattered a portion of her ashes out to sea from her favourite spot — the Cliffs of Moher.

Karen Bartlett is the author of Dusty: An Intimate Portrait of a Musical Legend, The Robson Press, £9.99. Available from www.therobsonpress.com/books/dusty (Promo code: IPDS)