CONTINUING with our series retrospective on the 1916 Easter Rising, we're looking at the days following the British counterattack, when rebel hopes of a successful insurrection began to diminish.

Because the volunteers had crucially failed to secure either of Dublin's two main railway stations or either of its ports, the British were able to transport thousands of reinforcements from England and from north of the border into the city with consummate ease.

This effectively doomed the rebels, because by the end of the week, British forces outnumbered them 16 to one.

Vicious fighting continued to rage across the city as the uprising entered its fourth day.

The rebel position at the South Dublin Union (site of the present-day St. James's Hospital) and Marrowbone Lane, further west along the canal, inflicted heavy losses on British troops - adding to the massive loss of life they suffered trying to cross Mount Street Bridge (where just 17 volunteers fought off an advance of more than 1,000 British troops, killing or wounding a 240 of them.

Over the next day or so, the British moved from building to building in the centre of town, attempting to stamp out any rebel resistance.

The close-quarters combat led to some extremely ferocious firefights, some of which done at near point blank range.

A particularly bloody fight occurred around North King Street. The rebels had established strong outposts in the area, occupying numerous small buildings and barricading the streets. 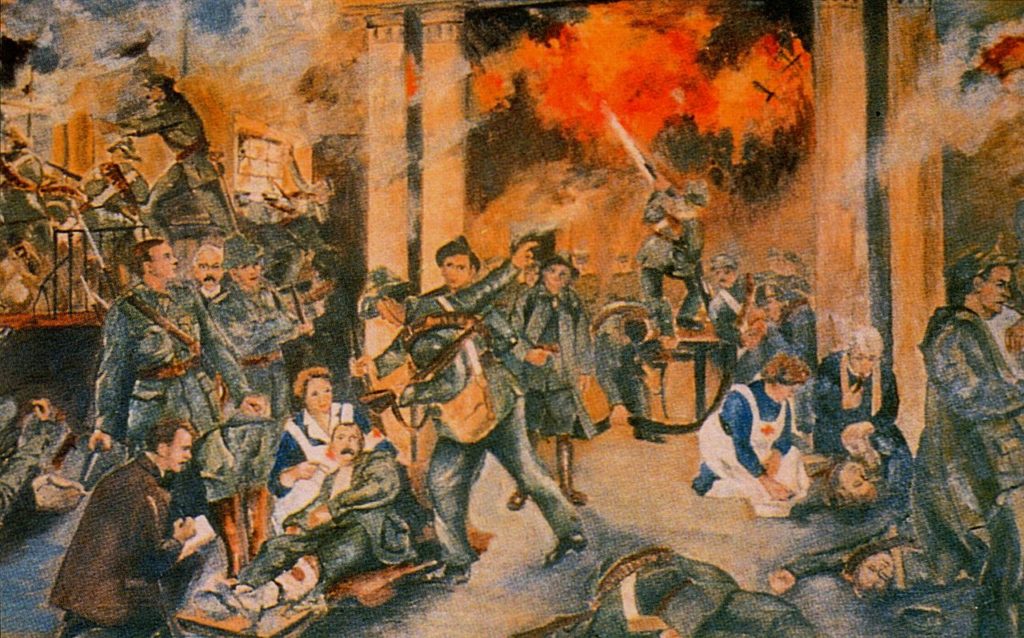 For three straight days, the British made repeated attempts to capture the area, in what was some of the fiercest fighting of the Rising. As the troops moved in, the rebels continually opened fire from windows and behind chimneys and barricades.

The British employed machine guns and attempted to avoid direct fire by using makeshift armoured trucks, and by mouse-holing through the inside walls of terraced houses to get near the rebel positions, which proved extremely effective as it allowed them access to buildings whose entrances were staunchly defended by rebel riflemen.

Ultimately, the sheer size of the British army would prove too much, and it began dawning on the rebels that there would be no victory ... in military terms at least.

They had lost key positions in the city, failed to prevent the arrival of reinforcements, and failed to garner enough public support once the insurrection began to keep a foothold.

British troops closed in on the rebel headquarters at Dublin's General Post Office (GPO), where the volunteers were prepared to make one final stand.

On the sixth, and final day of the Rising, the British approached the GPO and, expecting a subdued and swift surrender, sent a large regiment down O'Connell street to secure the rebel stronghold.

Instead, they were met with heavy fire from all sides, as the desperate rebels played their final hand - killing 11 soldiers and wounding 28 more.

Enraged, the British troops broke into the houses along the street and shot or bayoneted fifteen unarmed male civilians whom they accused of being rebel fighters.

Horrific civilian murder would, sadly, be a common occurrence over the next few days.