Is this Ireland's most haunted castle?

LEAP CASTLE in Co. Offaly proudly describes itself as 'Ireland's most haunted house' on its website, but is that just a bit of spooky hyperbole, or a ghoulish reality?

The historic castle's origins are fairly ambiguous (rather apt for a ghostly place, right?) but most historians believe that the main keep, as it is now, has been standing for almost 800 years.

It was built over a pre-existing site which was used by druids for ceremonial purposes as far back as 500AD.

Leap Castle gained widespread attention from around the world due to its reputation of harbouring spirits, and has featured on a number of ghost-hunting and paranormal shows.

Its history is stained in blood and death and even legend of its beginnings is draped in a cape of the macabre.

Leap Castle was originally named Leim Ui Bhanain which means "Leap of the O’Bannons." The O'Bannons were an affluent clan from Tipperary, and two brothers began fighting over rule of the family. In order to determine who would be chief, the siblings challenged each other to leap from a rock where the castle was to be built. Whoever survived the jump would not only govern the clan but also rule the would-be castle.

The O'Bannons wouldn't be rulers for long though. They were subservient to the O'Carroll clan, who were a vicious and domineering family, were fuelled by greed and power and who had gained notoriety for being a violent, ferocious bunch.

The O'Carrolls seized the castle, but once the chief of the clan died without naming a successor, violence and carnage would quickly follow, bringing with it a tinge of the supernatural.

Two brothers were to fight over rulership of the clan, just like the O'Bannons did. One was a priest and while in the midst of mass, his brother burst into what is now known as "The Bloody Chapel" and plunged a sword into his chest, killing him in front of the family, as the butchered priest fell across the altar.

Since then, legend has it the priest’s apparition can be seen wandering the bloody chapel as well as the stairway below. 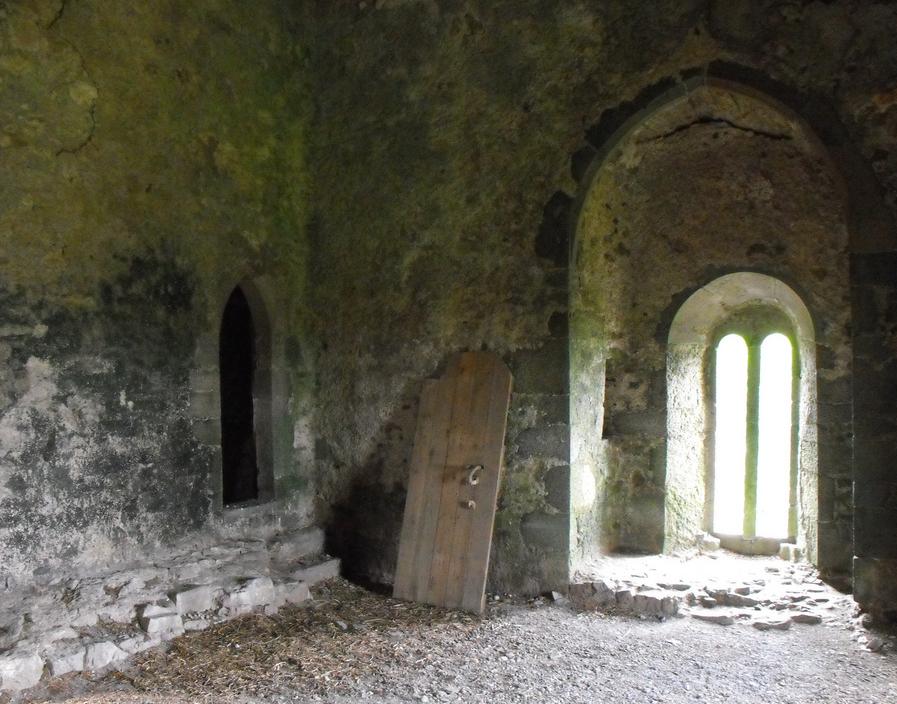 The "Bloody Chapel" at Leap Castle

Continuing the senseless carnage, the O'Carrolls would later invite another clan, the McMahon's for a feast at Leap Castle, celebrating the the latter's victory over one of the O'Carroll's rival clans. But instead of treating their guests, they would poison the McMahons to death, wiping them out in one fell swoop, in something akin to the Red Wedding in Game Of Thrones.

The ghosts of the McMahons have been seen by many haunting the grounds of Leap Castle ever since. 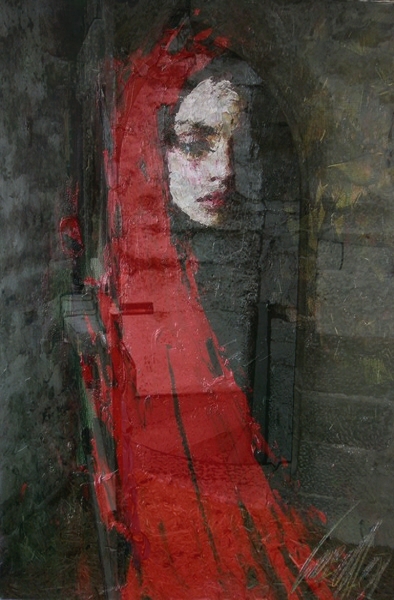 One of the most notorious haunting stories at the Castle is the legend of the Red Lady: a tall specter clothed in a fluttering red gown, wandering the corridors of the place, clinging to a sharp blade.

As the story goes, she was a woman who was imprisoned by the O'Carrolls and repeatedly raped. She later fell pregnant, and when the baby was delivered, her captors quickly murdered it with a dagger. In absolute despair, the woman was said to have grabbed the blade and ended her own life. 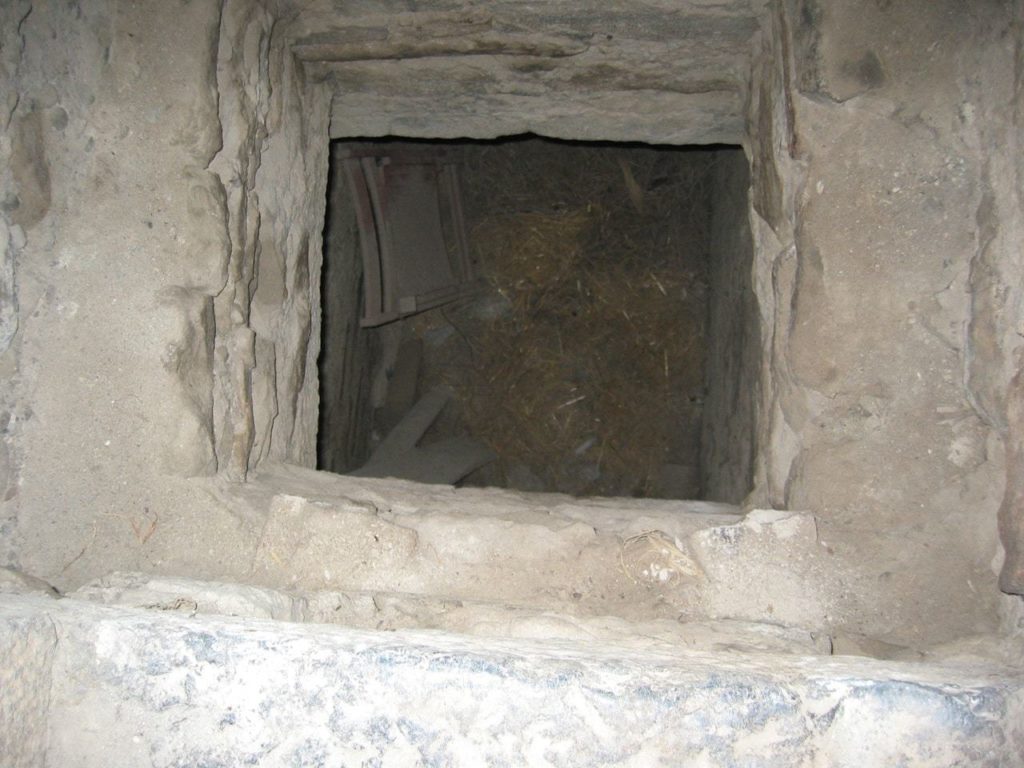 During a renovation in the early 1900s, an oubliette (or dungeon) was discovered hidden behind a wall and beneath a trap door in the castle.

Upon inspection, hundreds of human bones littered the room, many of which were implied on large spikes. The theory being that prisoners would be dropped through the trapdoor and be skewered on the spears eight feet below.

A mid-18th century pocket-watch was discovered down there, which could indicate just how frighteningly recently the oubliette was used.

The ghosts of these two little girls can often be spotted playing in the Main Hall of the house. They are said to have lived on the estate during the 1600s.

Emily died aged 11 after falling from the castle’s battlements. Today, there are still sightings of a little girl falling from its great heights, only to disappear before reaching the ground. Charlotte is seen dragging a deformed leg in tow.

In the 16th century, the castle was to change hands once again, and as you'd expect, plenty of blood was shed.

The daughter of the reigning O’Carroll chieftain became smitten with an English prisoner in one of the castle’s dungeons, a captain Darby. She would sneak him food and soon the two developed a plan to escape the castle and elope.

On the day of the escape, the two were fleeing the castle when they ran into the girl's brother in a stairwell. A sword-fight ensued between Darby and the brother, and the brother was killed. And with O'Carrol's son dead, the daughter was now heiress to the Castle. The two later married and inherited the very castle where Darby had been a prisoner, and started a new family.

Captain Darby was a bit temperamental and became known as "the wild captain".  He had amassed his own treasures in battle which he hid in compartments scattered throughout the property.  The wild captain was later imprisoned for treason in Dublin but was later allowed to return to Leap Castle.  Years of imprisonment had driven the wild captain to the brink of madness and he was unable to recall where he had hidden is fortune.  As the legend goes, the fortune still remains in Leap Castle and on certain evenings where the energies favor the spirits,  you can see the phantom of the wild captain searching the grounds for his lost treasure.

The Darby's abandoned the castle in the 1920s, during the Irish civil war which followed shortly after the Irish war of independence from England. Given the Darby's were an English family, the castle became a symbol of oppression and was torched, bombed and looted by the IRA.

From there, the castle lay dormant until it was purchased in the 1970s by an Australian historian, Peter Bartlett, who happened to be an ancestor of the O'Bannon clan.

For years he set about restoring the castle, and throughout much of that works he claims to have experience a number of supernatural occurrences and poltergeist activity.