FOR over 20 years Eileen Rowder has been sewing and stitching the green, white and orange of the Irish flag.

She is just one of 20 staff at Dublin’s Prospect Designs, the powerhouse creators of Ireland’s national flag.

Nestled in the centre of Dublin city, close to St Stephen’s Green, the firm is run by brothers Ken and Mel Cairns.

Officially adopted as Ireland’s national flag in 1937, the Tricolour is used as a universal symbol for Ireland – paraded at the most important of state occasions while also embraced by Irish sports fans around the world.

And with anything up to 600 flags a day going out, Prospect Designs’ managing director Ken Cairns joked: “As long as Ireland’s winning, it makes a big difference.”

The family-run business has proudly produced flags for many prestigious clients – from the Irish President’s office to the Irish Defence Forces.

“We do all the army stuff when they’re going out to the Lebanon and places like that, we've done all the colours of every Irish naval ship too,” said Mr Cairns.

And of the Tricolour that flies outside the Irish Embassy in London, he added: “Oh yes, you can be 100 per cent sure it’s one of ours. We send out to the UK nearly every day.” 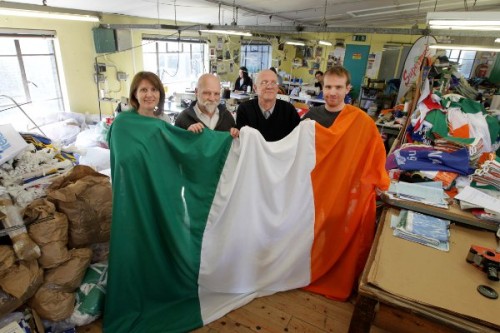 The team behind Jenny, Mel, Ken and Stephen Cairns

For the team also behind the iconic Irish flag that sits on top of the GPO on Dublin's O'Connell Street, there would appear to be no heights they can fail to reach.

Their flags have been brought to the top of Mount Everest on numerous occasions, to the North Pole and even outer space as part of a NASA mission.

“The commander was of Irish descent from Kerry and he wanted a flag to take with him.”

Set up over 50 years ago, Ken Cairns has worked for the company since 1968 alongside his brother Mel.

They have since been joined by the next generation of flag-makers – Ken’s daughter Jenny and son Stephen.

As to how many flags they've produced in that time, he jokes: “I wouldn't have a clue but millions!”

But he admits: “I don’t have any flags at home. You've heard the saying the shoemaker doesn't wear a decent pair of shoes.”