All together now, “Where the green glens of Antrim are calling to me. . . . .” Yep, they've got plenty of glens in Antrim, from Glentaise down to Glenarm They're so famous they're even mentioned in Ireland's Call. 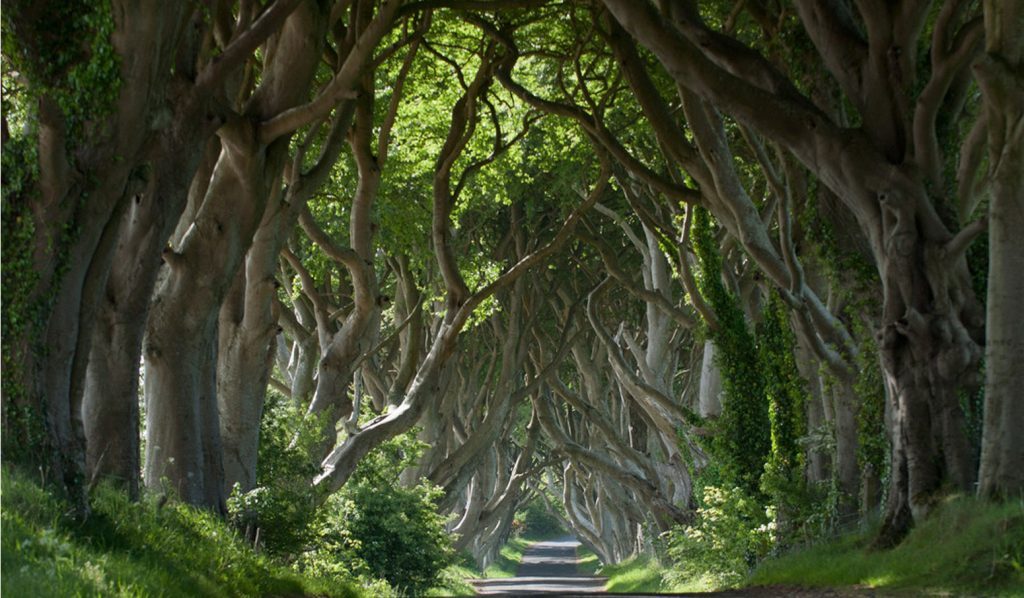 Antrim's Dark Hedges road has been made famous by Game of Thrones (Image: File)

Aye, the county which gave the world Bramley’s apples is pleased to call itself the Orchard County on informal occasions. (It also gave the world the football penalty kick, but the Penalty County just doesn’t have the right ring about it.) Sometimes also called the Cathedral County — Armagh is probably the only city in the world with two cathedrals with the same name: St Patrick's. And if you don't know why, you haven't been paying attention for the last four hundred years or so.

Carlow – The Dolmen County, or the Mount Leinster County

Ireland’s second smallest county gets its names from (a) the Brownshill Dolmen (b) the highest elevation in the county. It might also reasonably be called the Garden County, but that name was already taken (by Wicklow). People from Carlow are often referred to as Barrowsiders — referring to the river, and not the garden vehicle.

Cavan — The Breifne (or Brefni) County

Named after the ancient rulers of the area, although unkinder people have called it the Tight Wad County. 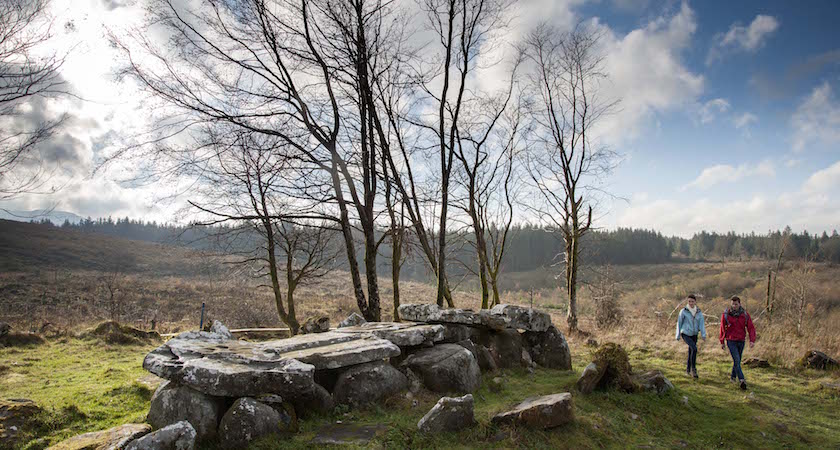 The banner in question is the either that captured by Clare's Dragoons at the Battle of Ramillies, or the banner of Catholic emancipation raised by Daniel O'Connell's victory in an 1828 by-election for Co. Clare.

The ‘rebel’ comes from Cork city's support for pretender to the English crown Perkin Warbeck. If Cork people had got their way King Perkin I would have sat on the English throne — but good sense prevailed when everyone realised how silly the name sounds. The ‘rebel’ nickname was further reinforced by Cork's enthusiasm for fighting against the British in the War of Independence. Corkonians are also called Leesiders, Bottle Stoppers or Donkey Eaters (it’s a long story; particularly the last one)

This comes from the original name Doire or Daire Calgaich, meaning oak in Irish. 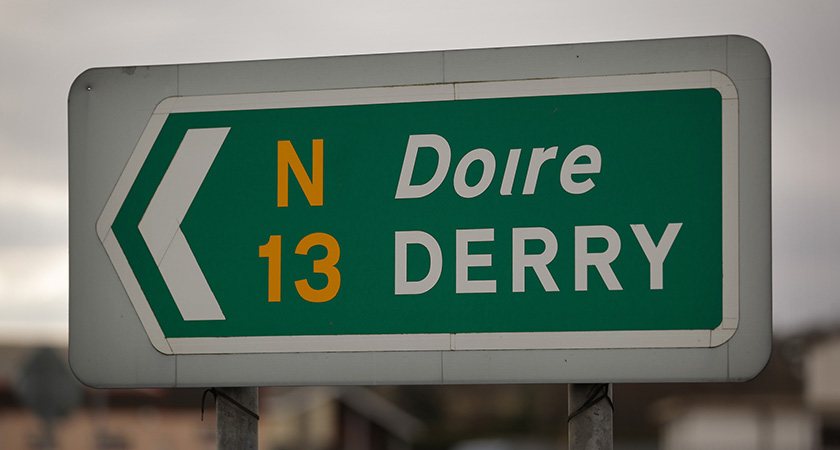 Donegal — The Forgotten County, the County of the Gaels

Forgotten, as any Donegal person will tell you, by Dublin, Belfast and Glasgow. Those in the north of the county are often referred to as the Herring Gutters. But to be honest, we've forgotten why.

Down — Mourne Country, or Kingdom of Mourne

See Naples and die, they say, before adding, "See Newry and Mourne". That's the official name of the county council. But Down is one of of the few counties that refer to themselves as 'country' or 'kingdom', not 'county'. It's also called County Up-and-Down on account of the prevalence of drumlins.

Dublin — The Pale, the Smoke, or the Metropolitan County

The inhabitants of the capital are often referred to as ‘The Jacks’, short for jackeen. The Oxford English Dictionary defines a jackeen as "A contemptuous designation for a self-assertive worthless fellow," citing the earliest documented use from the year 1840. So the jacks have been with us for a good while. 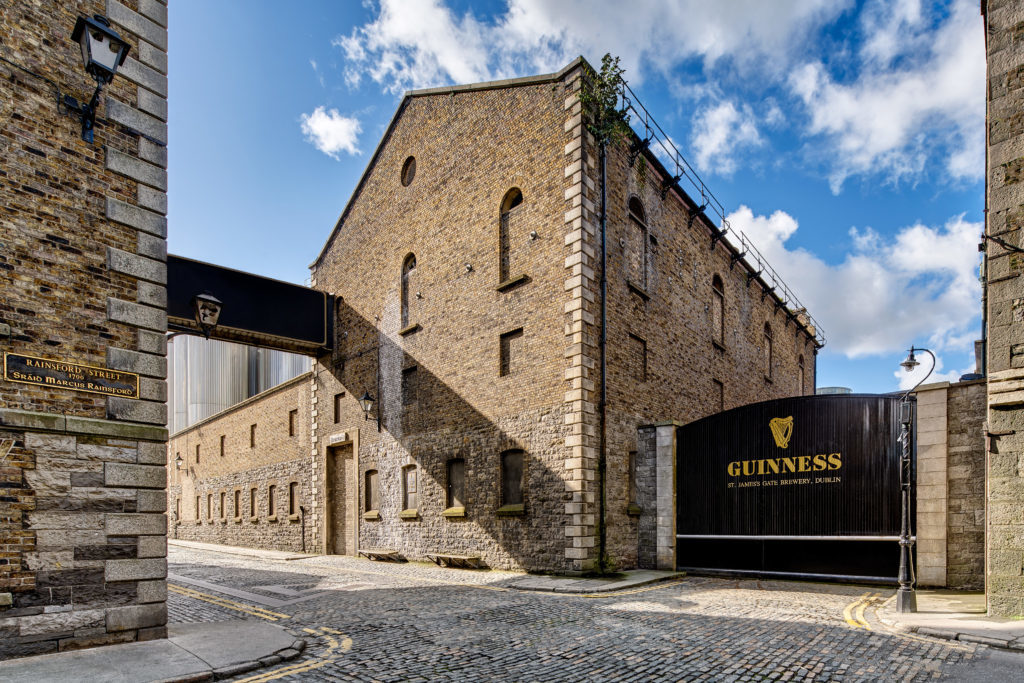 A visit to the Guinness Storehouse is a must while in the capital (Image: Getty)

Probably the wateriest county in Ireland, although goodness knows there’s plenty of competition for that title.

Named after the local type of boat, not the rugby player, nor any other hooker you might be thinking about. Aka the Gaeltacht County, with the people known as Connies, Herring Chokers, the Tribesmen or the Galway Blazers.

Another county with a grandiose name. The people of Kerry reckon it’s called a kingdom just because it is, that’s why, boy. More academically, the name may date back as far as the original tribe that occupied this area, under the kingship of Ciar. 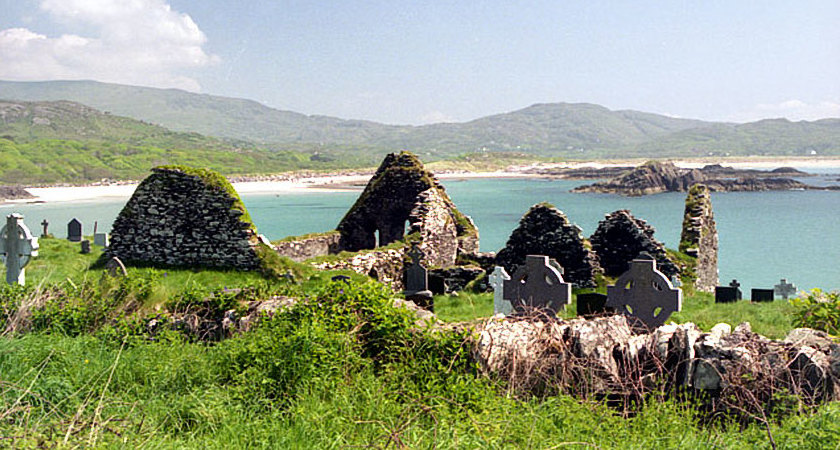 All  to do with the pastureland and horse-racing. Kildare people are known as Lilywhites — a GAA shirt reference.

Kilkenny — The Marble County, or the Ormond County

The 'marble' from which much of the old city is built isn’t marble at all, but carboniferous limestone. But ‘The Carboniferous Limestone City’ doesn’t really cut it as a name. Kilkenny people are often referred to as The Cats — Kilkenny cats are regarded as particularly tenacious.

'Queen’s County' as a name hasn’t really been so popular since the Brits got their marching orders. 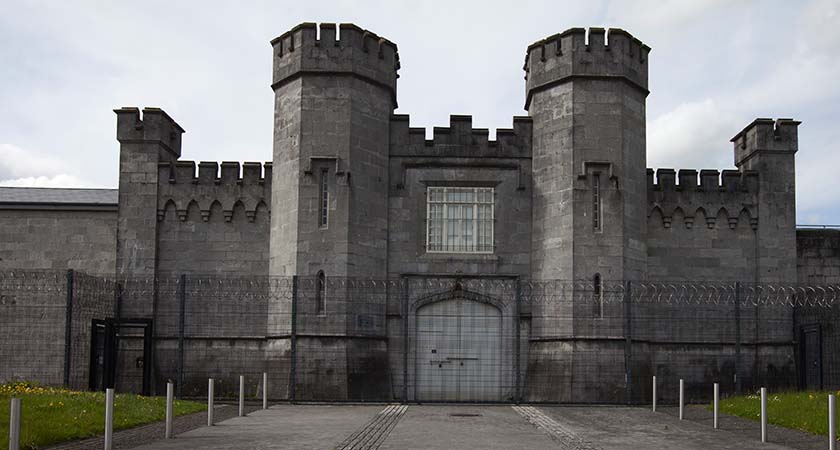 Leitrim is somewhat rural — it has no traffic lights, but can boast two miles of coastline, and has lots of wild roses. Residents are known as the Decent People (presumably by themselves).

The name refers to the Treaty of Limerick, 1691 which ended the siege of Limerick. Residents are called the Shannonsiders.

Longford — The County of the Slashers

Slasher, in a non-pejorative sense, comes from Myles 'the Slasher' O'Reilly, killed defending the bridge of Finnea in 1644. 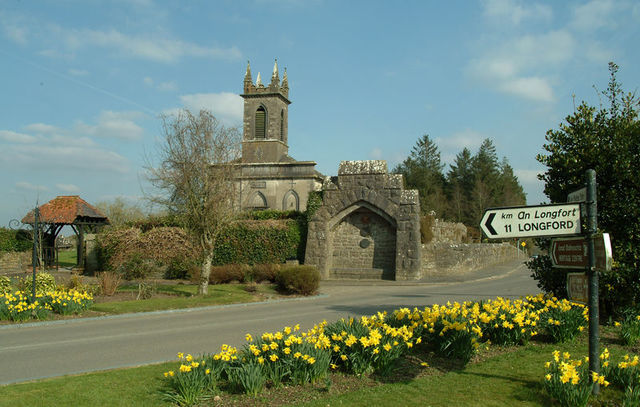 Ireland’s smallest county, which lies just above the Wee-Ould line. This is the line, akin to the Mason–Dixon line in the US, that divides Ireland. Above the line anything can be ‘wee’ — a wee credit card, a wee cup o' tea, even a wee cathedral. Below, it’s ‘ould’. “I wouldn’t mind an ould sandwich” (meaning you’d quite like a fresh one). Co. Louth is therefore at a very important linguistic crossroads in Ireland.

This is a reference to the county’s westerly position on the shores of the Atlantic. It does tend to get parky alright — there's a rumour that one day on Achill Island the wind stopped blowing and everybody fell over.

The name dates back to the glory days of Tara, and the crowning of Ireland’s ancient royalty there. It's also claimed that Halloween got going here a few thousand years back, so the Halloween County would seem a reasonable name. 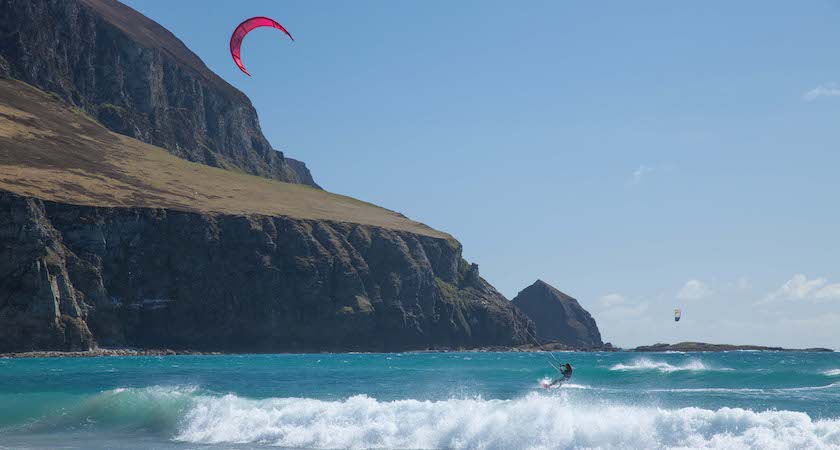 The word Monaghan comes from the Irish Muineachán — 'the place of thickets’ — and everywhere you’ll find tangled thickets of blackthorn and whitethorn, ash trees and alder bushes tumbling across the  landscape. Just look out for the odd geologist there to study the quintessential drumlin landscape, or an angler or two sampling the world class fishing.

Offaly — The Central County, the Middle of Ireland County

Offaly is also known as The County that Beats Banagher (who also, according to the saying, beat the devil). There is, we would have to point out, a town called Banagher in Derry, which also claims the origin of the saying. Offaly has also been referred to as The Faithful county, which must be of comfort to all the married folk.

The name is a passing reference to the predominance of sheep farming in the area. And please: they've probably heard every sheep-related joke going. 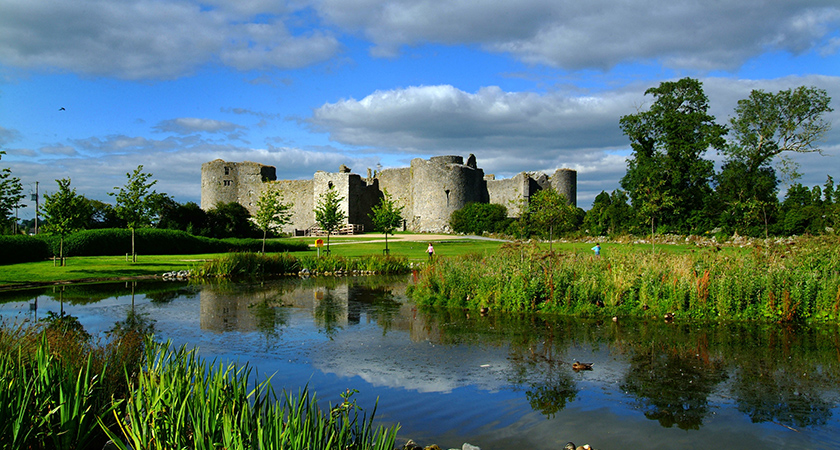 Roscommon Castle is a sight to behold (Image: File)

The origin here is uncertain, but 'Premier' might come from the prosperous farmland of the Golden Vale. It could also be a reference to the head honchos in the area, the Butlers. Princess Diana was related to the Butlers, so they are indeed the honchiest of heads.

One of the last redoubts of the old Gaelic order which lasted hereabouts till around 400 years ago.

Waterford — The Crystal County, The Déise

The Gentle County: a Saga of the Decies People by Nicholas Whittle was published in 1959. He chose the title because "We in Waterford have never been too prone to blow our own trumpet." Folk from Waterford regularly refer to themselves as Decies. The Crystal County comes from Waterford Crystal, which first set up shop here in the 18th century. 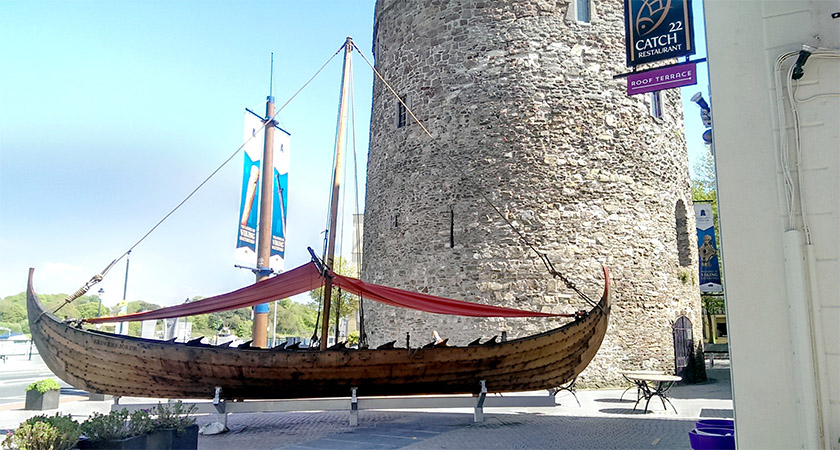 Reginald's Tower in Waterford is a clue to the county's Viking heritage (Image: Wikimedia)

The people of Westmeath have, in the past, been labelled as Smokey Heads because of the amount of turf burnt.

The Model County gets its name from early, progressive farming methods. Yep, not that sexy. But the people are called Yellow Bellies, which has a much more interesting, but somewhat off-colour origin — a Wexford hurling team won a challenge match in Cornwall in the 17th century while wearing yellow sashes in tribute to William, Prince of Orange. (They presumably thought he was Prince of Yellow.)

Ireland’s youngest county — it’s just over 400 years old — is chock full of botanical and horticultural A-listers, so presumably they thought, sod it, we'll blooming well call ourselves the Garden of Ireland.