IT SEEMS more than a few British people need a little more education on the exact coordinates of the Northern Ireland border dividing itself and the Republic of Ireland.

Finding the exact location of the border of Northern Ireland has always presented something of a challenge to British people.

Months later, the Northern Irish border is presenting a challenge to another British person, or whoever the brains were behind a biscuit tin being sold in Marks & Spencer.

The first offence caused by the tin, which shows an animated colourful map of 'Great Britain', shows the usual isles of Wales, England and Scotland - but for some reason includes the Republic of Ireland as one of it's British isles.

The second strike is that the Giant's Causeway, located in Country Antrim, is placed to the West of the map of Ireland, almost placing it in Sligo or Leitrim.

The last probably most unusual fault of the illustration is that the border between Northern Ireland and the Republic is not marked at all, with the landmarks of Northern Ireland somehow landing more than halfway down the island - making them seem like they're in Roscommon and Leitrim.

Take a look at the picture below and see if you can spot why people are taking such an issue with it. 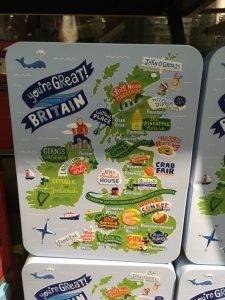 The tin was spotted by University of Edinburgh student Isabella Gabrovsky who quickly spotted the many faux pas committed by the map.

Rather hilariously, the tweet was noticed by The Irish Border Twitter account, who warned Marks and Spencer to "get the Giant’s Causeway off me. I have enough to worry about already."

Hey @marksandspencer get the Giant’s Causeway off me. I have enough to worry about already https://t.co/6B66sJrsin

Many others saw the faults with the inaccurate map, calling it out as they saw fit.

Umm, Republic of Ireland is not part of Great Britain...confusing

Yes border but did you notice that you’re an ex-border, disappeared, deleted, erased?

Yes border but did you notice that you’re an ex-border, disappeared, deleted, erased?