Piers Morgan: Meghan and Harry "despise" the royal family and so should hand back their Duke and Duchess of Sussex titles

The popular pundit and television host blasted Harry, 36, and Meghan, 39, on his first appearance back on the ITV show following a ten-day break.

After being stripped of their royal titles and duties, the former royals finalised the so called 'Megxit' process last week.

Commenting on the news, Mr Morgan said: "We will be debating today the Duke and Duchess of Sussex - should they no longer be called that, given how much they despise the Royal Family and everything it stands for.

"Apart from the wonderful ability it gives them with those titles to rake in millions of pounds in California."

Susana replied: "Or is that something which is within the gift of The Queen, and should be left up to her?"

But Piers, who has been a vocal critic of the couple, hit back: "Yeah, but you can give it up yourself, though, couldn't you?

"You could just renounce your own title, say,'We don't need the royal titles, we don't even like the royal family or the monarchy'.

"So, hand them back, it would be my view. You may disagree. We are going to be debating that."

The stripping of their official titles comes in the wake of the couple’s interview with Oprah Winfrey last week — a move which has led to some anxiety among palace insiders who are wondering what revelations will come from the supposedly tell-all interview set to air in March.

The Duke and Duchess had hoped to keep their patronages – especially Harry’s military honours and role of Captain General of the Marines – before it was announced that they would be spilling the royal beans on Oprah’s couch.

A source close to Meghan told the Daily Mail that the interview, airing on March 7, is “loudest way she'll get her voice back”.

Piers lambasted the couple for agreeing to "two days of gut spilling" with the chat show queen, as he and Susana interviewed former BBC presenter John Humphrys, The Mirror's Kevin Maguire and the Daily Mail's Andrew Pierce about the royal rift.

He said: "They are making gazillions off their royal titles, so the question remains this: 'Should they be able to continue trading as celebrities off being the Duke and Duchess of Sussex, titles gifted to them by marriage by the Queen?' "

John then described the couple as “sanctimonious” and accused them of speaking "garbage".

Piers replied: "It's normally laced with utter hypocrisy. For example, saying 'I want you all to look after every carbon footprint that you tread', says Prince Harry. Literally days later he is using Elton John's private jet like a taxi service."

Defending the couple, Susana said that the media was "obsessed with Harry and Meghan".

Piers responded: "If you are making $100 million from Netflix, who by the way have just invaded your own family's łife in Harry's case more than anyone in history with The Crown.

"And you take 100 million bucks from the company that has just trashed your own family and then claim to be the prince of privacy - do me a favour."

John also questioned the wisdom of Harry and Meghan publicising a picture of themselves paying their respects to fallen soldiers on Remembrance Sunday. 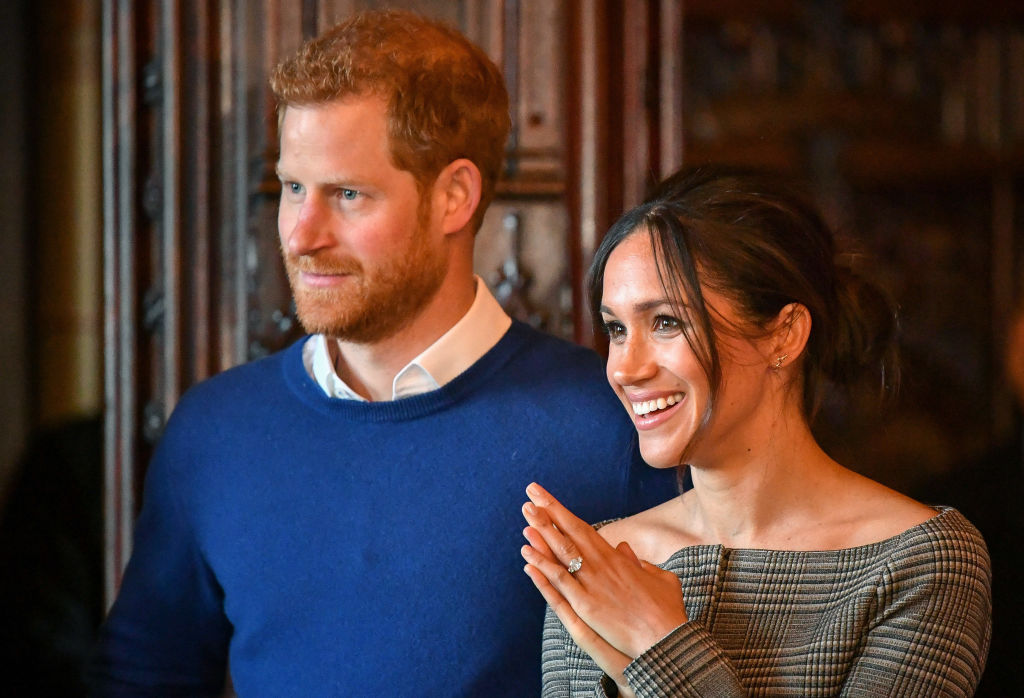 Prince Harry and Meghan Markle watch a performance by a Welsh choir in the banqueting hall during a visit to Cardiff Castle on January 18, 2018 in Cardiff, Wales. (Photo by Ben Birchall - WPA Pool / Getty Images)

He asked: "Shouldn't they, shouldn't Harry in particular, have done that in private?"

Again, sticking in the couple’s corner, Susana said: "you are so critical of them, I don't think there's any problem in having boundaries."

Piers then accused Harry of "snapping back at the Queen" after the couple released a statement about the remembrance service being universal.

He said: "The gall of it. Also and I think more offensively, on Tuesday Oprah Winfrey flew in to their California home for two days of gutspilling about the royals with Meghan and Harry.

"On Tuesday, we knew the Prince Philip, his grandfather, had been taken to hospital.

"The idea that Prince Harry's reaction would be to them sit down with the biggest talk show star in the world with his wife and spew, presumably, I think he is going to include some critical stuff about the royals as Prince Philip is lying in hospital...

"I'm sorry - but we are allowed to say, given they are still the Duke and Duchess of Sussex and making bazillions .