ALTHOUGH THE pandemic has been a turbulent time for all, the extra layer of living abroad has undoubtedly added to feelings of isolation, loneliness and homesickness among Irish emigrants.

An Irishwoman living in France recognised this at the start of 2021, and soon set about seeking a solution to the problem.

Aisling Demaison has been living in the country for ten years and currently lives in the city of Annecy in the southeastern region of the country.

Working in education to connect Marist Brothers education schools in Ireland with their origins in France, she was completing a virtual marathon with students in Ireland when the idea for runninghome.ie struck.

"During Covid they were trying to keep the kids fit and healthy, so they were virtually running from Athlone to France because that is the origin of the Marist Brothers," Aisling told the Irish Post.

"I was running with them, and I just thought it was great and I wanted to extend it a bit."

Running Home is a campaign which seeks to connect the Irish diaspora across the world by challenging individuals and teams to run the total distance between their current location to their hometown in Ireland throughout 2021.

Participants can be found in Australia, London, Gibraltar and Cologne, among other places, and it is all done to raise money for homeless charities in Ireland.

When Aisling first came up with the idea for it, there were just a handful of people involved but the number of participants steadily increased to 1,000 throughout the year.

"It was in January of this year that I came up with the idea, and then I put it to the media in Ireland and Ian Dempsey really liked it," she said.

"Jarlath Regan got on board from the Irish Man Running Abroad podcast, as did Sonia O'Sullivan and her daughter Sophie.

The idea grew so much that Aisling soon had to share organisation duties with others. An international committee was soon formed made up of Irish people in Cologne, Norway, Gibraltar and Switzerland.

"Together we tried to manage all the social media, and we created loads of events throughout the year like 'Run with Mum' for Mothers' Day.

"On St Patrick's Day we had group events all over the world and Sonia led the Melbourne team."

Participants have just completed the 'Run Without' challenge where they chose one item that makes their running experience easier and ran without it. Runners have chosen earphones and compression socks, with one person choosing to go without a coat and pants while running through the Swiss mountains.

"The challenges were based on where we noticed a need," Aisling said. "Someone in Cologne said GAA teams are suffering a lot because they couldn't get out and practice, or because they were in quarantine and they couldn't meet up.

"So for that we had a 'Puck the Path' challenge where we challenged GAA teams around the world to 'run back' to Croke Park or to their individual home places, and then they passed the puck to other GAA teams to do the same."

Some teams in Dubai and Australia paired up to contribute to the kilometres home together, using the running app Strava to log their distance

"The majority of people have reached home now, but it's the people who took on an individual challenge who still have a few kilometres to go," Aisling continued.

"I still have some kilometres to finish up before the end of the year, but a lot of people got family members at home to donate kilometres to them, which we encourage because we wanted to create a sense of solidarity and connection with home." 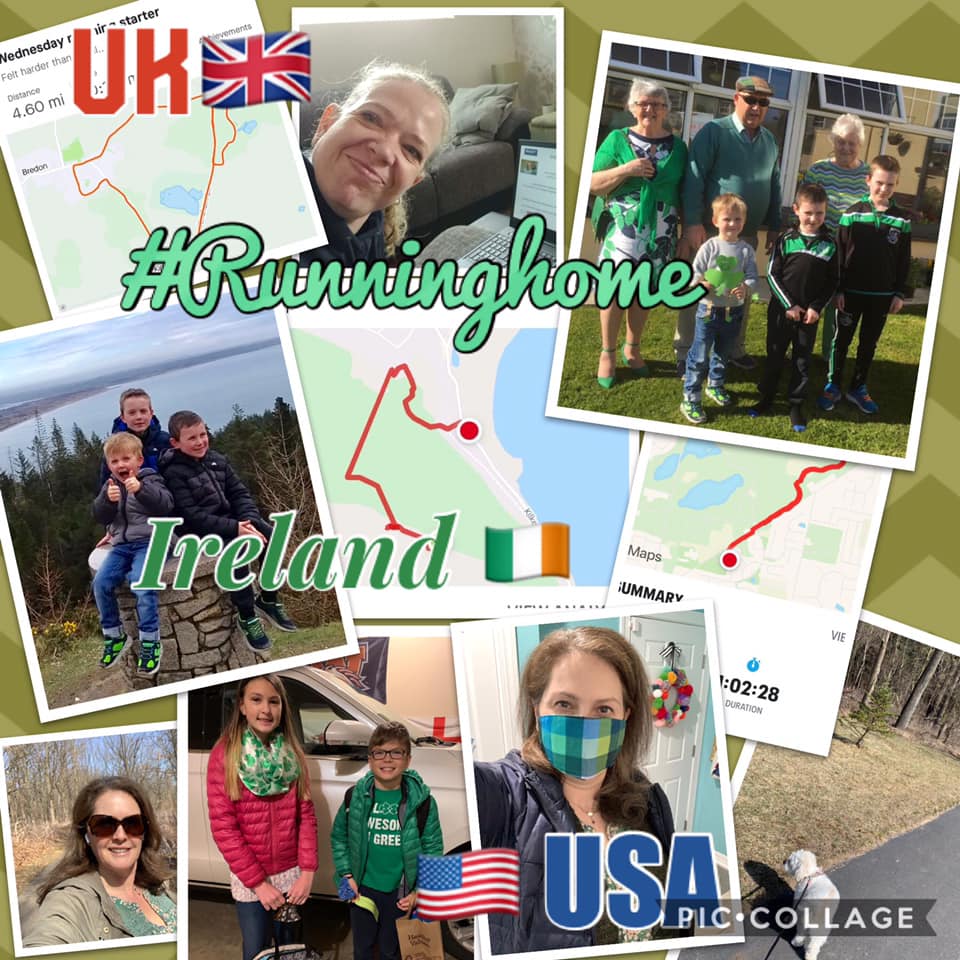 Participants of the Running Home initiative from all across the world.

That sense of solidarity was certainly achieved, with Aisling saying she is now friends with people in different countries despite never meeting them

"I feel like I'm best buddies with a girl in Norway, a guy in Gibraltar, someone in Switzerland and Cologne and I've never even met them before!

"In London for example, I can think of one girl who did so much running whose running buddy had passed away.

"People really began to open up, particularly when things were hard during the second lockdown."

Aer Lingus also got on board to sponsor the campaign, with flights being raffled off to raise funds for the charities.

"It really just lifted everyone's spirits, and teams connected even though they've never met. They were all piling into the kilometres collected by a specific country without ever meeting."

The two charities which will receive the funds raised, which now stands at €20,000, are Focus Ireland and the Peter McVerry Trust.

"The concept was all about how much we missed home, so we felt it was important to support people who don't have homes themselves.

"We want to raise as much money as we can so that people the charities help can have something for Christmas. It might not be a physical home, but it could be clothing or something to make the winter a bit easier."

In the lead up to Christmas, Aisling has been discussing returning home with participants in various countries.

"A lot of people have been home in the past year, and to be honest I don't know about Christmas this year yet for myself.

"Every second house around me is in quarantine, so it's getting really bad here.

"There's a girl in Gibraltar who hasn't been able to get home and she's trying to avoid bringing Covid home because there's someone vulnerable there.

"It's not so much that people can't come home, but more so about whether it's the right thing to do right now."

She believes that "it's a very strange time for people that are abroad right now."

"The Irish in Australia went through a lot and needed support for example, and I think people abroad are a bit lost.

"Any way that they can connect or support each other is great and to be welcomed, even if it's just in London or further away in Melbourne.

"The distance doesn't really matter, it's the emotions that go with the separation from home," she finished.