NEAR enough every city, county, and province of Ireland has its own emblem – and Irish families are no different.

Heraldic emblems in Ireland date back to as early as the 13th century, when they would take pride of place on the robes, armour or shields of certain families.

Irish family crests almost always include a shield and a motto, usually either in Latin or Irish.

A helmet often rests on top of the shield with a wreath decorated in the family colours on either side.

Nowadays a coat of arms provides little more than a sense of pride in someone’s roots – but the history of Ireland’s crests is an interesting one.

Here are the top 10 most common Irish family crests and where they come from...

The name: The most common Irish surname, Murphy is believed to be derived from the old Irish surname Ó Murchadha meaning ‘Son of the Sea Warrior’.

The crest: The red of the Murphy crest represents martyrdom while the black to the crest’s centre symbolises fidelity. The wheat is representative of plentifulness – fitting given that the surname is Ireland’s most common. 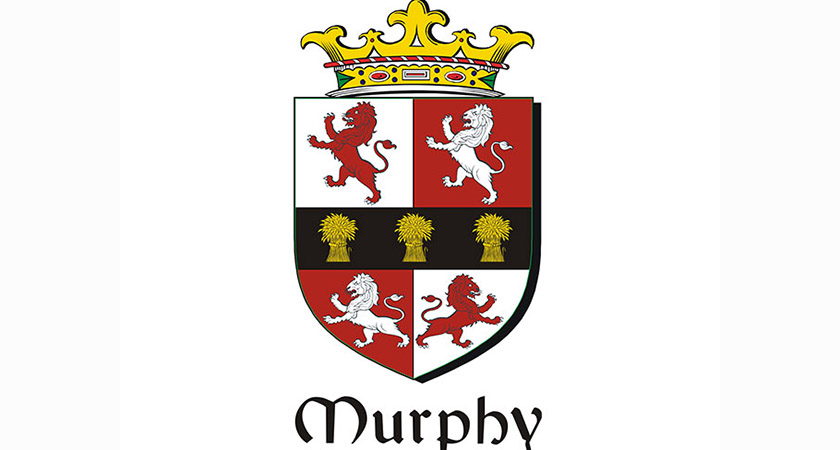 The name: There are several theories on where Kelly came from. The most common is that it is the Anglicised version of the Irish ‘Ó Ceallaigh’. Others believe that Kelly has Scottish roots.

The crest: The azure blue signifies loyalty and truth, while the gold symbolises generosity. The rings are a symbol of fidelity and the tower represents both strength and the family motto. As for the lions, they represent deathless courage. 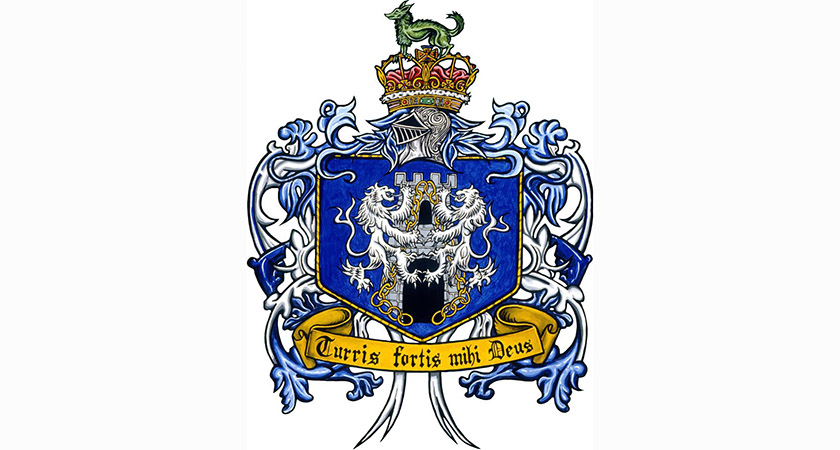 The name: The history of Byrne is well recorded – the surname comes from Co. Kildare, where the clan of Bran, King of Leinster, came from. King Bran died in 1052 but his name adapted with the centuries, becoming Byrne. It also appears in some instances as O’Byrne.

The crest: The white of the crest represents peace and sincerity, while the red represents the ‘Martyr’s colour’. The crest’s hands symbolise justice.

The motto: “Certavi et vici”, meaning "I have fought and conquered". 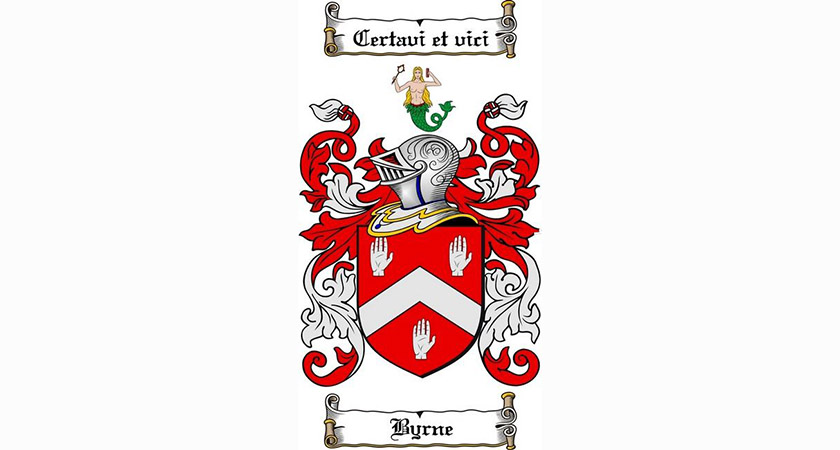 The name: Ryans originated in counties Limerick and Tipperary in Ireland. Anglicised from the old Irish of Maolriain, it is believed that Ryan (the “riain” part of the Irish name) comes from an ancient word for water.

It was first recorded in Medieval times but believed to have originated well before then.

The crest: The griffin heads on the Ryan family crest are symbolic of vigilance and bravery. The red colour signifies military fortitude.

The motto:  “Malo More Quam Foedari”, meaning “I would rather die than be disgraced”. 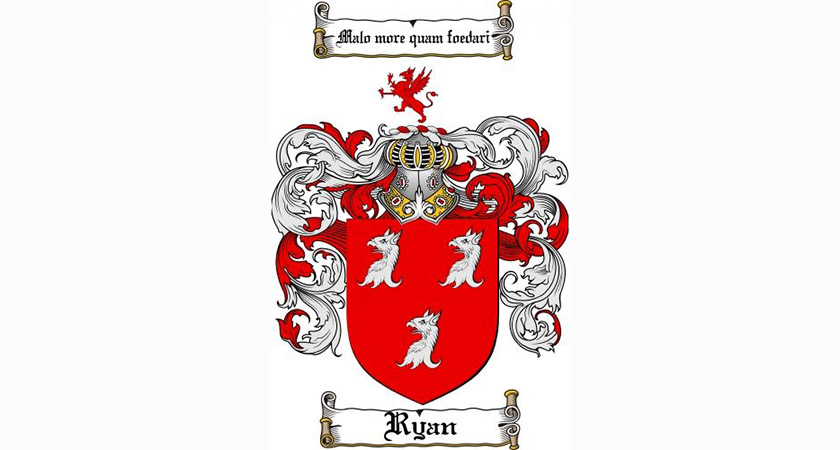 The name: A very regal name, O’Brien dates back as far as the 9th century, to the High King of Ireland, Brian Boru. A powerful and impressive clan in Irish history, the O’Briens commanded high respect in Ireland 1000 years ago.

The crest: The white signifies peace and sincerity, while the red represents the ‘Martyr’s colour’. The golden lions symbolise both generosity and deathless courage.

The motto: “Lamh laidir an Uachtar”, meaning “the strong hand from above”. 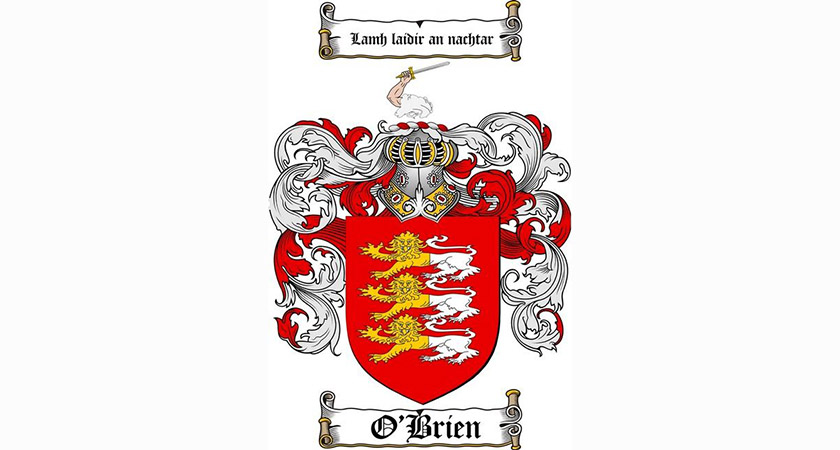 The name: Coming from the Anglo-Saxon word “waelisc”, Walsh means “foreigner” or “stranger” – Walsh is a very popular Irish surname around the world.

The crest: The red symbolises martyrdom while the spearheads symbolise a readiness for military service. 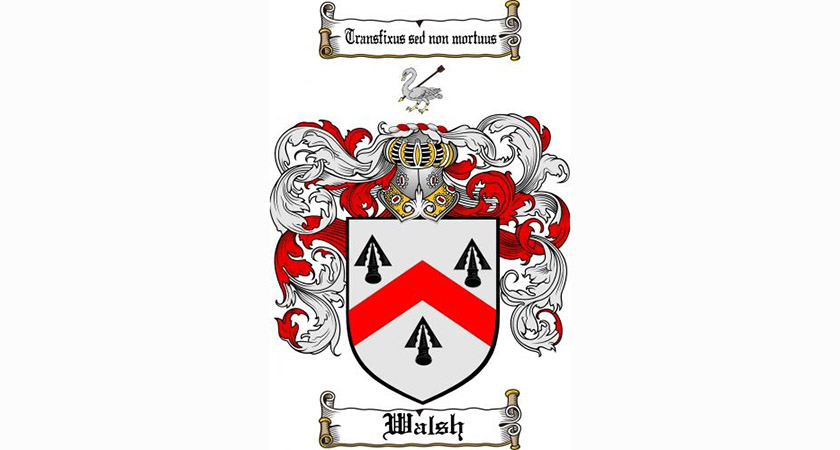 The name: O’Sullivans can be traced back as far as the 3rd century, when their descendent King Eoghan Mór ruled over the province of Connaught.

The crest: The boar represents warrior spirit while the snake denotes wisdom. The stag is representative of peace while the sword symbolises justice. 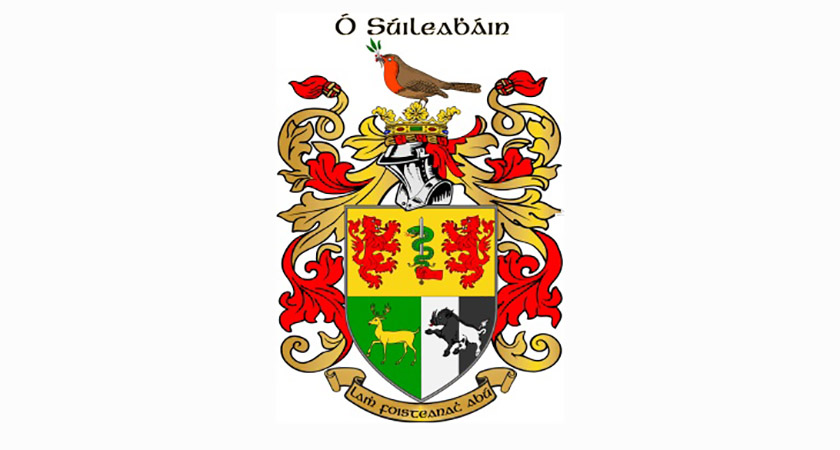 The name: With variants like Connor, Conner, O’Conner and Conor, this Irish surname has evolved more than most. Nevertheless, every variant of the name is descendent from the most famous Connor of all – King Conchobhar of Connaught, who died in the year 971.

The crest: The green signifies hope, joy and loyalty in love. The oak tree symbolises the ancient origins of the family. 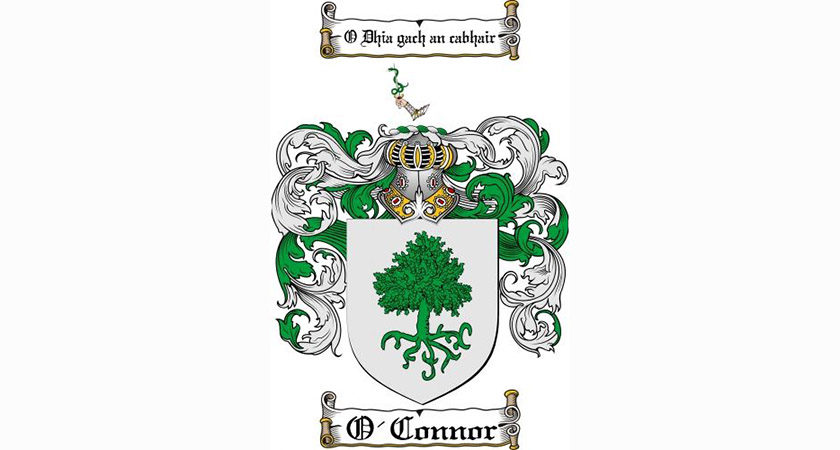 The name: Doyle’s roots come from the south-east of Ireland – a common name in counties Carlow, Wexford and Wicklow. It is derived from the old Irish phrase “Dhubh-ghall”, or dark stranger.

The crest: The interlinking blue and yellow represents two factions within the same family. The stag’s heads symbolise peace and harmony.

The motto: “Fortitudine vincit”, meaning “he conquers by fortitude.” 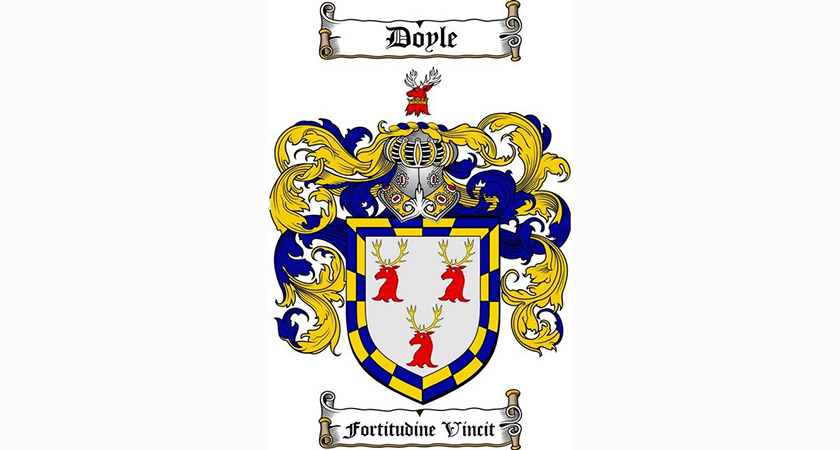 The name: The prefix “Mc” in any Irish name means “son of” – while Carthy, also spelled Carty, comes from an old word for “loving”. The ancient McCarthy clan were well-known for their territory disputes with neighbours.

The crest: The red of the McCarthy coat of arms derives from its symbol – the red stag – itself representative of the ancestors of the Celtic race. The hand clutching a lizard signifies domination over enemies. 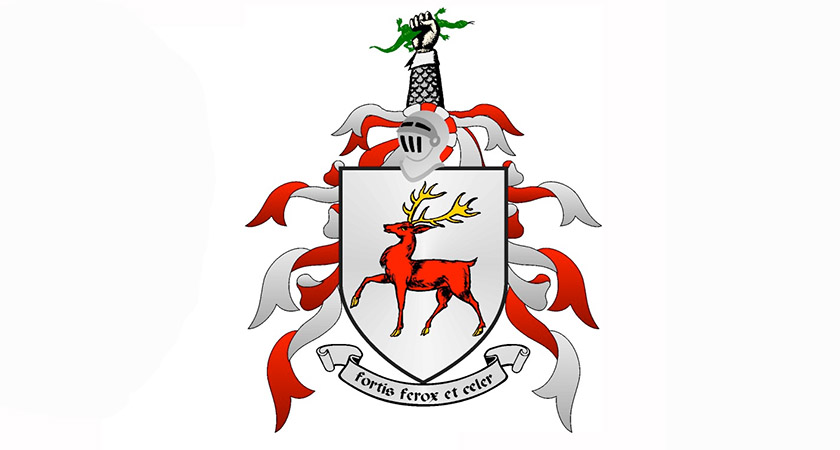