The Ireland Fund of Great Britain's Annual Award ceremony at the Irish Embassy London 2016. Presented by Ambassador Mulhall to Monica's Place, 28th January 2016 Photography by Fergus Burnett Accreditation required with all use - 'fergusburnett.com'

A CHARITY providing a home from home for Britain’s ‘Forgotten Irish’ communities has been commended for its exceptional work at an award ceremony in London.

Monica’s Place in Birmingham was recognised by the Ireland Fund of Great Britain (IFGB) for its 16 years of service caring for elderly Irish men who have fallen on hard times and suffer from isolation.

Monica Jones, whose parents came from Co. Kerry and Co. Tipperary, was presented with the award at the annual ceremony hosted by Ambassador to Britain Dan Mulhall at the Irish Embassy on Thursday, January 28.

IFGB Managing Director Mark Carrigan also gave a £30,000 grant to the charity that will be used to repair the flood damage caused to its property on Wretham Road in Handsworth.

The donation will supplement the £58,600 awarded to Monica’s Place by the Irish Government in November, as part of its £4.8million annual Emigrant Support Programme (ESP) grants for Irish charities in Britain.

An emotional Ms Jones spoke of her pride on receiving the award, saying: “I’m overwhelmed, it’s fantastic to get recognition for the work that we do. I’m speechless. We just do what we do and to suddenly get recognised for it is lovely, not for me but for the lads, our ‘Forgotten Irish’.

“I feel so proud and humble and on behalf of the lads and staff at Monica’s Place, it’s an honour to be here and not to be taken for granted.

“A lot of these Irish men were living alone and left to fend for themselves, we offer them a warm, safe and homely place for life.”

Currently 19 residents aged between 60-90 years of age occupy Monica’s Place, receiving welfare services and accommodation at one of its three houses; 80 per cent of the men have previously battled alcohol addictions.

They are first-generation Irish men, who like many others, came to work in Britain’s construction industry during the 1950s and 1960s. But sadly, they lost connection with their families and spent many years alone.

“Many of these men slipped through the nets, they lost their benefits when they came over to Britain, they lost connection with their families, some of them felt too ashamed to go back,” Ms Jones added.

“Here they have a home, they’re all of Irish blood so they have that love for each other and that connection, even if they don’t get on all the time.”

Established in 2000, Monica’s Place began as an extension of the charity work carried out by Ms Jones’ parents. 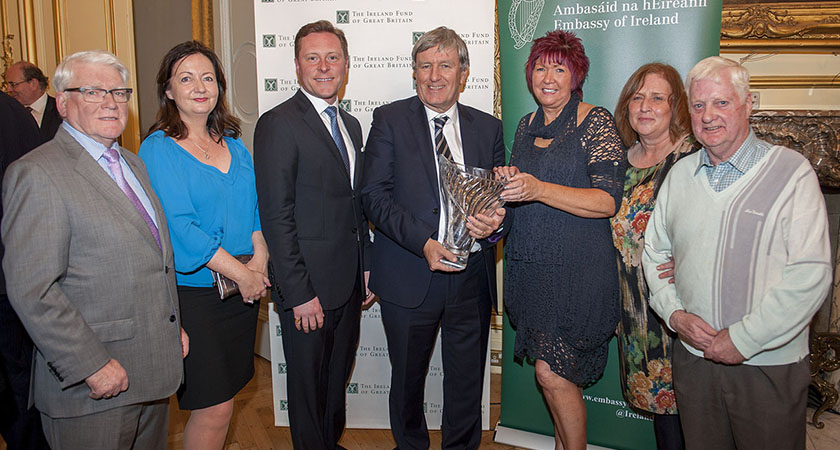 They had always kept lodgers and even after her mother passed away at the age of 49, her father continued caring for these vulnerable members of Birmingham’s Irish community.

Dublin native Joseph Curtis, 80, has lived at Monica’s Place for the past eight years, after years spent living at different locations across Britain, courtesy of the Salvation Army.

He arrived in Britain in 1952, helping to build Britain’s roads, living in Chatham in Kent and then in Rochdale and Oldham in Manchester.

“I can only thank Monica for all that she’s done, I love her,” he said. “When I came to Birmingham, to Monica’s, I finally found a home. It really is a home from home, it’s absolutely beautiful.

“We’ve been taken on trips to the west of Ireland, to Galway and many other beautiful places. I tried to go and meet my family in Dublin, but nobody’s there. They’re all finished, gone, the house was pulled down.”

The charity provides day-to-day services to its residents, such as hot meals, transport to medical appointments and community centres, and social events to commemorate birthdays and anniversaries.

But one of its primary focuses is to reunite the men with their families, where possible.

With the £30,000 funding, Ms Jones hopes to two more full-time members of staff and install a lift to help the less mobile residents, with further plans to build an office.

“Our biggest wish is to continue what we’re doing, as we know there are men out there in corners of hospitals, misplaced in homes and even under bushes,” she added.

Every year, the Ireland Fund of Great Britain rewards the work of a small Irish organisation having a major impact on the community with a special prize.

In addition, IFGB provides funding to these organisations on a regular basis, to ensure they continue to provide these key services to the Irish community in Britain.

Speaking at the event Mark Carrigan, Managing Director at The Ireland Funds, said: “What Monica’s place is doing, on a shoestring budget, to address a very challenging social issue is impressive. The charity sector as a whole needs to collaborate more and this is a great example of one organisation working together with others to achieve savings and deliver a better service.”