Mother Jones, the Cork-born activist whose work is recognised the world over.

A MOTHER and baby home survivor group has been recognised with the Spirit of Mother Jones Award for the work it carries out to ensure that those who died at a Cork home are memorialised.

The Cork Survivors and Supporters Alliance (CSSA) was announced as the winner of the award for their "bravery and determination to ensure that development does not take place on sensitive burial areas of the former mother and baby homes at Bessborough in Cork," according to the Spirit of Mother Jones Festival Award website.

They were also awarded for "their efforts to organise a voice for the mother of deceased children, and to publicly question where the remains of hundreds of babies are buried, and why records of burials have not been produced to date."

Jim Nolan, on behalf of the Cork Mother Jones Committee said by their "ongoing efforts and continuing campaign to seek the human right in accordance with Irish tradition for a dignified burial place for those who died, for the preservation of the burial grounds, for the right of access to those grounds and for the creation of an appropriate memorialisation garden for the mothers and children at Bessborough, they have displayed the courage of their convictions and are worthy of the Spirit of Mother Jones award for 2021."

Following proposals for a development on the grounds of Bessborough towards the end of 2020, the CSSA opposed the plans citing newly discovered evidence for the location of a large childrens’ burial ground on the Bessborough estate.

Using this evidence, the CSSA's legal team convinced An Bord Pleanála in April 2021 to refuse permission for the development, despite the Commission of Investigation into the Mothers and Baby ‘Homes’ stating that it is “highly likely” that burials took place in the grounds. 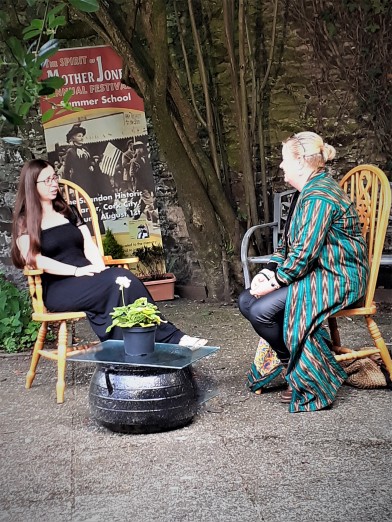 Maureen Considine and Catherine Coffey O’Brien of the CSSA in discussion. Source: www.motherjonescork.com

Mother Jones was born in Cork in 1837 and moved to Canada after the famine where she became a labour and union activist, and is recognised for her contribution to workers' rights, with the award being given each year to individuals and groups that best embody her fighting spirit.

The CSSA's membership is largely composed of mothers whose babies died in the institution and their families, and members Maureen Considine, Ann O’Gorman and Catherine Coffey O’Brien have agreed to accept the award on behalf of of the Alliance.

A discussion about the role of the CSSA and its contribution to the planning hearing will be shown on Cork Community Television at 7pm on Saturday as part of the online Spirit of Mother Jones Festival.