Mr Kim and Mr Trump traded insults for several months before agreeing to the historic meeting at which the presidential jet was offered to the North Korean despot.

In an even more extraordinary turn of events, Mr Trump declared his love for the North Korean leader after their meeting – which captured the world’s attention but failed to materialise any strategic or diplomatic gains.

The ever-unpredictable Mr Trump then "stunned even the most seasoned diplomats" by offering Mr Kim a lift home on Air Force One after the 2019 summit, the BBC documentary, 'Trump Takes on the World', has revealed.

Had Mr Kim accepted the offer, the North Korean leader would have returned to North Korean airspace inside of the US president's official aircraft – raising a number of security concerns.

Mr Kim, who has his own plane – the Chammae-1 – and travelled via train to the summit, declined the offer. 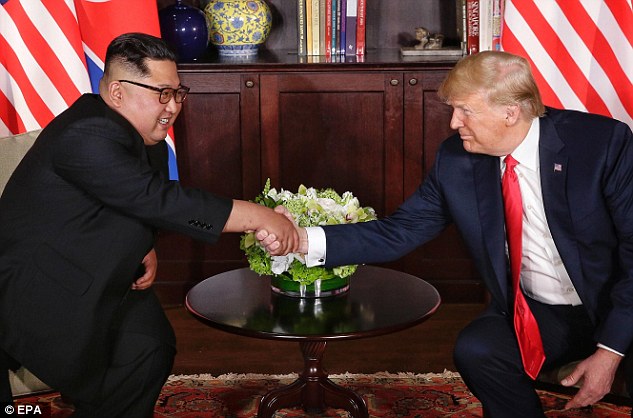 "The president knew that Kim had arrived on a multi-day train ride through China into Hanoi and the president said: 'I can get you home in two hours if you want.' Kim turned him down.

When travelling to his first summit with Mr Trump in Singapore in 2018, Mr Kim came via an Air China plane – a clear sign of China’s influence on the impoverished country straddling its southern border.

Clearly eager to show off the US presidential perks to his new friend, Mr Trump gave Mr Kim a peek inside his presidential state car, a $1.5m bullet-and-bomb-proof Cadillac known as "The Beast".

Only last month Mr Kim described the US as North Korea’s "biggest enemy", adding that Washington's "policy against North Korea will never change" regardless of "who is in power".

North Korean official media have not yet to referred to Joe Biden – who emerged victorious against Mr Trump in the 2020 election – by name as US president.