Dublin finally gets its very own Monopoly game

A DUBLIN version of the world's most popular board game, Monopoly, has arrived in shops, ending the long wait for a version of the game focusing on the Irish capital.

An Ireland edition had already been released with Dublin featuring prominently.

Shrewsbury Road and Ailesbury Road occupied the two most expensive property spaces, traditionally associated with Park Lane and Mayfair, on that version of the game.

Dublin Monopoly does things a little differently though with historical and cultural landmarks included on the board ahead of some of the capital's pricey but less well known residential areas.

Temple Bar and the Molly Malone statue are among the most expensive properties on the board while several shopping venues including Dundrum Town Centre feature.

Phoenix Park is equally pricey while the Nord Anglia school and St Columba's school also get spaces on the board.

This time around Phoenix Park and The GPO rank as the most expensive squares on the board at the princely sum of 350 and 400 Monopoly dollars each.

At the other end of the scale, Molly Malone and the Ha'Penny Bridge are both on offer for the modest price of just 60 Monopoly dollars apiece. 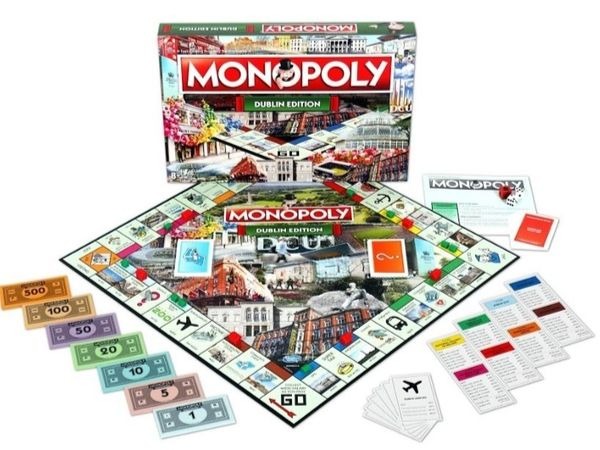 Dublin Zoo, the airport and the Aviva Stadium are all included alongside familiar favourites like The Waterworks and The Electric Company.

There's a distinctly Dublin theme to the Community and Chance cards, with rewards like a shopping spree at Arnotts up for grabs.

The choices come after Winning Moves invited the public to vote on what would be included on the board.

One kind gesture has seen Heart Children Ireland, a charity in the city, given a Community Chest space of its very own.

Speaking to the Irish Times, Dublin Monopoly creators, Winning Moves UK revealed Phoenix Park was originally set for a much lower ranking until the visit of Pope Francis last summer.

The pontiff's arrival saw the park's value shoot up, moving it up the board in the process.

Dublin Monopoly has been a long time in the making, coming long after any number of weird and wonderful variants on the hit board game have been made.

Game of Thrones, the FIFA World Cop and even Ghostbusters all got specially-themed Monopoly boards ahead of the Irish capital.