ROALD DAHL was one of the best children's authors of all time. Roald Dahl Day !

To commemorate him and his achievements, Roald Dahl Day happens every year on his birthday - September 13th - celebrating the magic that he brought and continues to bring to children everywhere.

The wonderful film To Olivia (below) tells of his tale of his daughter Olivia – and his passion for children’s tales and its impact on the rest of his family life and world. More on that below.

Born on the 13 September 1916, Roald Dahl wrote books which children loved to read and adults loved to read for their children as well as for themselves  -  selling 250 million copies worldwide.

The imagination was stunning and remarkable, as he brought wonderful worlds to life and descriptions which he painted with his pen.

Many of his wonderful books have been adapted in to classic films and Theatre Musicals and Plays.

Which is your favourite children’s book by Roald Dahl?

He enters a gigantic, magical peach, and embarks on a wild and strange adventure encountering a range of wild transforming  garden bugs and creatures.

Dahl dedicated the book to his six-year-old daughter, Olivia, who died only a year after the book was published.

Charlie and the Chocolate Factory (2005) with Johnny Depp

Matilda the story book has been ranked in the top 30 all-time greatest children’s novels. Worldwide sales have reached 17 million, and since 2016 sales have spiked to the extent that it now outsells Dahl's other works.

The film was released in 1996 starring Mara Wilson as Matilda, and directed and produced (and co-stared) by Danny De Vito.
And it has been a successful musical.
Matilda Wormwood is a young self-taught genius, neglected by her parents. She loves books and reading and she discovers she has a gift  -and develops a bond and friendship with her young school teacher Miss Jennifer Honey – and an arch villain, the tyrannical principal Miss Agatha Trunchbull.

Fantastic Mr Fox by Roald Dahl was published in 1970.

The story is about Mr. Fox and how he outwits his farmer neighbours to steal their food from right under their noses.
It was adapted to an Animation film in 2009, with voices by George Clooney, Meryl Streep, Jason Schwartzman, Bill Murray, Willem Dafoe and Owen Wilson among others.

In The BFG, an eight-year-old orphan girl named Sophie lying in bed in an orphanage. cannot sleep, and sees a strange sight in the street. She sees a Giant in the street carrying a bag and an odd trumpet. He sees Sophie, who tries to hide but he plucks her out from her bedroom,  through the window. Then he runs quickly to his large cave.

When he sets Sophie down, she begins to plead for her life  - and the story of the Big Friendly Giant develops from there.

There was an animated cartoon film in 1989, with David Jason (Only Fools and Horses fame) providing the voice of the BFG and Amanda Root as the voice of Sophie.
In 2016, there was a live action film by Steven Spielberg, starring Mark Rylance, Ruby Barnhill and Penelope Wilton.
In the film version,  the "Big Friendly Giant" takes Sophie to Giant Country, where they attempt to stop the man-eating giants that are invading the human world.

It has also been adapted as a theatre performance

There has been workings to develop a CG animated/live-action film since 2003, with John Cleese and Kirk DeMicco, then Mark Mylod in 2004, and in 2012 Conrad Vernon was pencilled to direct a film.
Here is a theatre version of The Twits from the Royal Court Theatre, in Sloane Square, London.

While his parents are out grocery shopping, his elderly grandmother bosses him around and bullies him. She intimidates George by saying that she likes to eat insects and he wonders briefly if she's a witch.

To punish her for her regular abuse, George decides to make a magic medicine to replace her old one.
There are all sorts of ingredients in it- like Scarlet nail varnish, Hair remover and Pink plaster powder.
George's Marvellous Medicine is one of Dahl’s shorter of his published books, at 96 pages.

It was adapted to stage by Birmingham Stage.

Finally - not a Children's book - To Olivia

Part of Roald Dahl’s and his wife Patricia Neal’s story is featured in the film To Olivia.
It released on 19 February 2021, starring Hugh Bonneville as Roald Dahl and Keeley Hawes as Patricia Neal.
In November 1962, Dahl's daughter Olivia died of measles encephalitis, age seven. Her death left Dahl "limp with despair", and feeling guilty about not having been able to do anything for her. 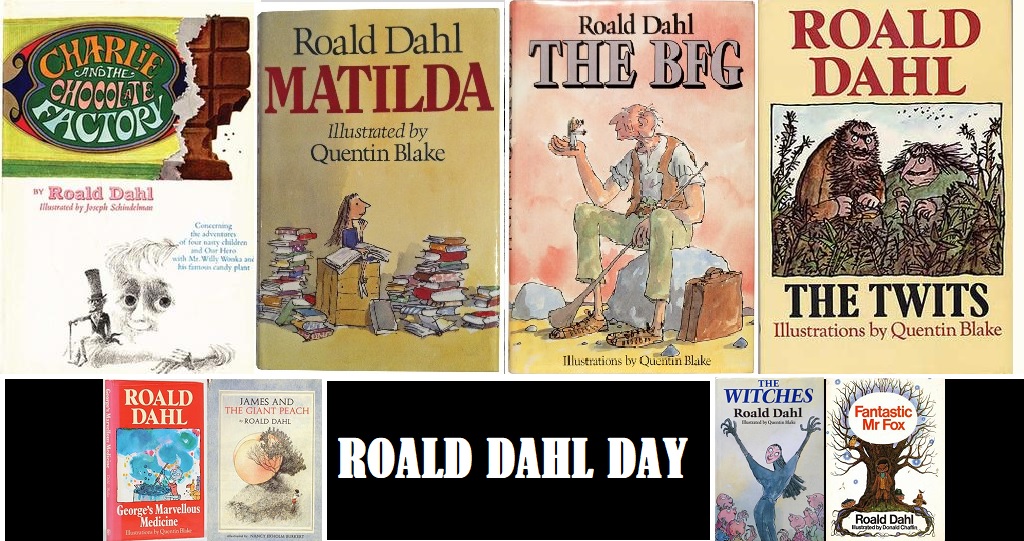