AN Irish couple married for 63 years have been separated when only one of them was granted a place in a nursing home after they both applied.

Michael Devereaux, 90, applied for a place at his local nursing home in Wexford alongside his wife Kathleen, 85, in March.

But while Michael was admitted to the nursing home, Kathleen’s application was not accepted, on the grounds that she was independent enough to live outside the home.

The couple – who were married in 1954 – told their story to Joe Duffy n RTÉ Radio 1's Liveline programme, and received a huge public response after making a public plea to be reunited.

Their son Tom Devereaux said his parents wished to spend their remaining days in the nursing home together, but authorities only accepted his father.

For quite a few weeks since he's been in the bed has been empty. It just doesn't make sense," said Mr Devereaux.

"They're in their twilight years. At the ages they're at obviously they're not going to live too long. I never thought they'd end up in a situation like this. They're being treated really, really badly."

Michael also spoke to Liveline and the 90-year-old struggled to fight back tears when speaking about his wife.

“It’s terrible, Joe,” he told presenter Joe Duffy. “I can’t sleep at night even. I’m waking up at three o’clock, maybe four o’clock every morning, and what do I do?

“I pray first of all and then I cry. It’s terrible. We’ve been separated for the first time in our lives after 63 years of marriage.” 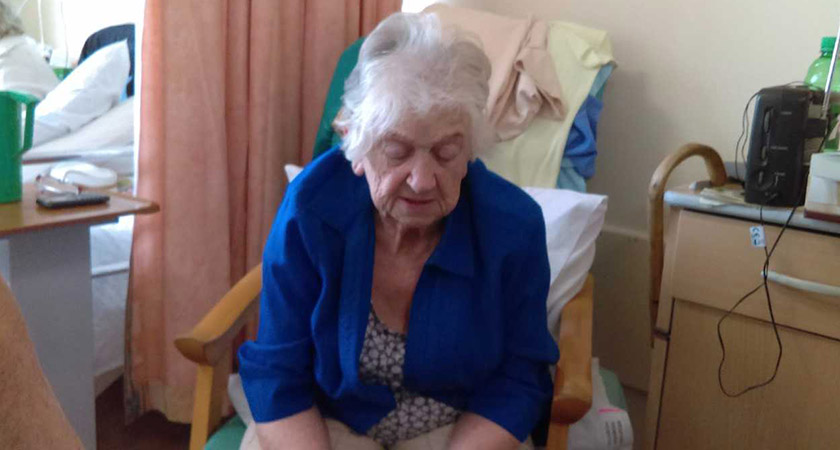 Kathleen was not accepted by the care home as she was judged to be too independent. Picture: Liveline

“We were loyal citizens all our lives and it's terrible to think that the same country has left us in this situation. I'm devastated."

Michael’s wife Kathleen also spoke on the show, saying simply that she wanted to go to join him at the nursing home. “I want to be with my husband.” she said.

"I saw him the other day for about an hour. Somebody brought him to me. I'm upset too. It's dreadful. What's going to happen?" she asked.

Tom explained that since their application was rejected, the only option available is to take the matter to the High Court, but that he doesn't want to put his parents through the stress of such a trial.

"What person in an advanced age can take on the High Court?” Tom said. “There's no compassion for the elderly. It's horrific.”

Health minister Simon Harris released a statement to Morning Ireland on Tuesday in which he addressed the couple’s plight.

The statement reads: "Minister Harris was very concerned to hear of the situation regarding this couple.

"He has instructed the HSE to seek to resolve the situation and address the special circumstances with compassion being absolutely paramount.

"The Minister expects to receive an update today and is very clear that this must be resolved."