Mr McGuinness passed away in Derry during the night, aged 66 after a short illness.

In a statement this morning, Sinn Féin President Gerry Adams said: "It is with deep regret and sadness that we have learnt of the death of our friend and comrade Martin McGuinness who passed away in Derry during the night.

"He will be sorely missed by all who knew him.

“Throughout his life Martin showed great determination, dignity and humility and it was no different during his short illness.

"But above all he loved his family and the people of Derry and he was immensely proud of both.

“On behalf of republicans everywhere we extend our condolences to Bernie, Fiachra, Emmet, Fionnuala and Grainne, grandchildren and the extended McGuinness family.

“It was with great sadness that I have heard of the passing of Martin McGuinness, and on behalf of Sabina and myself, may I express our deepest sympathy to his wife Bernadette and to his family.

"The world of politics and the people across this island will miss the leadership he gave, shown most clearly during the difficult times of the peace process, and his commitment to the values of genuine democracy that he demonstrated in the development of the institutions in Northern Ireland.

"As President of Ireland, I wish to pay tribute to his immense contribution to the advancement of peace and reconciliation in Northern Ireland – a contribution which has rightly been recognised across all shades of opinion.

"As a political colleague of many years, and having participated together in the Presidential election campaign of 2011 that brought us all over Ireland, Sabina and I have appreciated both Martin McGuinness’ warmth and his unfailing courtesy.

"Our paths have crossed many times in recent years at official events, including most recently at the GPO for the 1916 commemorations, as well as in our celebrations of ‘the beautiful game’, at Glentoran and in France at the European Championships.

"In addition to his services in public life, as an inclusive believer in community in all its forms he will also be remembered for his warm support for Derry GAA and Derry FC.

"His death leaves a gap that will be difficult to fill. May he rest in peace.” 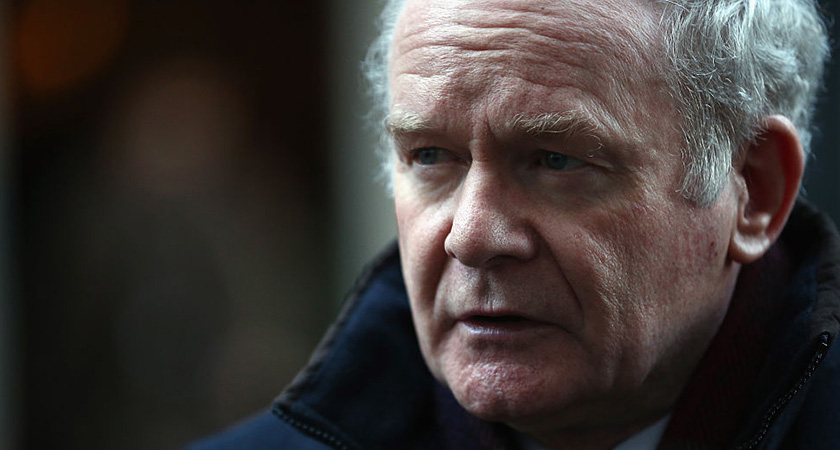 On learning of the death today of Martin McGuinness, the Minister for Foreign Affairs and Trade, Charlie Flanagan, said: "It was with great sorrow I learnt of Martin’s passing. My deepest sympathies are with his wife Bernie and his family at this very sad time.

"In his embrace of the politics of peace, he made an immense personal contribution to building and consolidating peace on this island.

"His own personal journey from militant republicanism to deputy First Minister in a power-sharing administration with unionism helped to map the road to the Good Friday Agreement and its vision of partnership and reconciliation.

"In the past three years, I had the opportunity to work closely with Martin McGuinness and saw at first hand his many qualities.

"Martin’s generosity of spirit; his courageous leadership; and his ability to stretch himself in the pursuit of political stability inspired many others to do the same.

"He led with patience, with courtesy, and with a willingness to see and acknowledge the goodwill in others – even if those people were far removed from his own republican tradition.

"As deputy First Minister, Martin displayed great courage and leadership, especially in undertaking gestures of respect and reconciliation which reached across community lines.

"He did so despite being exposed to political criticism and personal risk. This legacy of leadership will no doubt inspire the next generation of leaders in Northern Ireland.

"Martin was deeply rooted in Derry, with great affection for its people, its places and its sporting traditions.

"But above all it was his family that was at the centre of Martin’s life. For Bernie, his children and grandchildren, Martin’s untimely loss is very difficult to bear and they are in all our thoughts at this very sad time."

Martin McGuinness announced his resignation from politics in January this year.

He said his resignation was in protest at the DUP’s failure to accept the principles of power sharing and parity of esteem and their handling of the RHI crisis.

Later that same month, he said he would step down from his role due to his health, and to make way for a new leader.

“Unfortunately, my health and the current crisis have overtaken this time frame and I am stepping down from my role to make way for a new leader of Sinn Féin in the North,” he said.

“Over the last 10 years I have worked tirelessly to make power-sharing work. The institutions are now in a deep crisis as a result of recent events and we are facing into an election when the people will have their say.

“After long and careful consideration, I have decided that it is time for a new generation of republicans to lead us into this election and the negotiations that will follow.”

Martin McGuinness was the MP for Mid Ulster from 1997 until his resignation in 2013.

On June 5 2008 he was re-appointed as deputy First Minister to serve alongside Peter Robinson, who succeeded Paisley as First Minister.