When Paul and Rob Forkan lost their parents in the 2004 St Stephen’s Day Tsunami it was one of their darkest days, but over the last 10 years they have channelled that pain into something positive. James Mulhall meets the inspirational brothers behind the Gandys Foundation and the Orphans for Orphans mission

IN THE distance, I heard it. A rumble, like a train hurtling towards me. A breeze started to pick up from the seafront. The palm fronds in the trees began to move. I felt the ground vibrate. A jolt of adrenaline shot through me. I needed to act. Something was coming; something vast and powerful.

These are Rob Forkan’s words as he looks back on a day that changed his life forever. On December 26, 2004 Rob – along with his brothers Paul and Mattie, sister Rosie and parents Kevin and Sandra - were in Sri Lanka. That morning a massive tsunami swept over the island.

The Forkan children would eventually arrive back in Britain barefoot, wearing mismatched clothes, after miraculously emerging relatively unscathed from the natural disaster.

The Forkans’ story begins shoeless and ends, poignantly, with a pair of flip-flops.

An adventurous pair, Kevin and Sandra Forkan took their children out of school for a trip to India. What began as a short term trip, turned into a life of travelling.

Kevin had the travel bug from a young age, with Irish links on his paternal side he had spent every summer in Co. Mayo, before taking himself further afield in his adulthood.

Rob, who was 17 at the time, was the eldest sibling on the trip.

Along with him, there was 15-year-old Paul, 11-year-old Mattie and their younger sister Rosie who was 8.

Dad Kevin wanted to explore more of Asia so, after discussing things with his wife, they made the unorthodox decision to sell their home and business and take their four youngest children on the trip of a lifetime, working and volunteering around the world.

Their elder daughters, Marie and Joanna, decided to stay behind. As the months stretched to years, it became clear that a life of travel was destiny for the Forkans.

But then disaster struck.

“After several years in India, we headed to Sri Lanka in 2004 and spent Christmas in Weligama, a little fishing town on the coast,” Rob explains. “The next day, Boxing Day, was when it hit.”

The family had been staying in a resort near the beach. Rob and Paul had a bungalow to themselves and their parents, Mattie and Rosie shared a neighbouring one. After the tsunami hit, Rob and Paul emerged together. 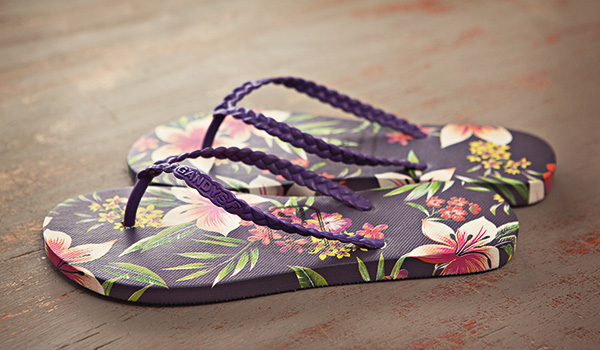 Gandys flip-flops which come in many different designs

After a few hours, they eventually found Mattie and then Rosie. Not knowing their parents’ fate, they made the 100 mile trek to the capital, Colombo. From here, the British Embassy flew them home, dressed in spare clothes and barefoot as there were no shoes that would fit them.

“The next months were incredibly hard,” said Rob. “We moved in with our older sister, Marie. It was only three months later it was finally confirmed that our parents had lost their lives.”

Along with an estimated 280,000 others, Kevin and Sandra Forkan perished that day, sacrificing their own lives to ensure their children got to safety. Theirs is a tragic tale but one that has left a heart-warming legacy behind.

Wanting to carry on their parents’ legacy, Rob and Paul have established a flip-flop company called Gandys.

Set up in 2011 it has proven to be a testament to Rob and Paul’s strength in the wake of the tragedy.

Rob was at a festival when the idea took hold, while Paul was living in Australia.

“Waking up one morning at a music festival, Rob found he had a ‘mouth like Gandhi’s flip-flop’ and suddenly something clicked. We changed the spelling and the brand was born!” said Paul.

Rob did some research and travelled to Australia to surprise Paul for his 21st birthday, when he brought up the plan.

The younger Forkan did not take much convincing and before long, the pair had packed in their jobs to devote themselves full time to the venture.

They had arrived in Britain barefoot, having spent years in flip-flops as they travelled, so the casual footwear had become “the unofficial Forkan family uniform”, Rob says.

The idea was simple - the brothers would produce a range of flip-flops and aim to raise money to help orphans and underprivileged children around the world.

The Gandys Foundation was born in the summer of 2013.

It is not surprising that the boys have found successful so early on in their business. 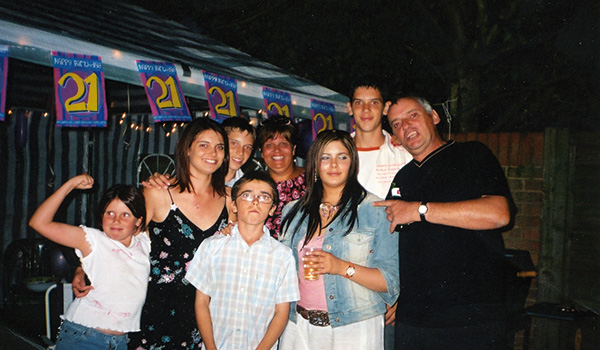 The Forkan family in happier times

Their father Kevin had an entrepreneurial spirit and was always on the lookout for a new opportunity.

In the 1980s, he ran a successful car dealership, before setting up Rose Fashions in the 1990s, a venture that proved to be the most successful Forkan family business.

While Kevin had the business mind, mum Sandra was an extremely caring person who encouraged the children to volunteer and help others as they travelled, never hiding the truth of poverty from them.

Rob and Paul inherited both of these attributes, combining the insatiable need to help others with their entrepreneurial talents.

They were raised in a house surrounded by innovation and, much like Rose Fashions began in the Forkan family home, they took to their bedroom to establish their first business venture.

The company grew from humble beginnings in the brothers’ bedroom in Brixton in 2012 and now turns over £1.2million annually.

Celebrity endorsers include Sir Richard Branson, who stocks Gandys on his private island for guests, and Irish popstars Úna Foden and Niall Horan.

But not only is Gandy’s Rob and Paul’s livelihood, it is also a charity that allows them to help other orphans of the tsunami.

As the business expanded, the charity side of things has grown too leading to the establishment of the Orphans For Orphans Foundation.

In the New Year, Rob and Paul will be opening a brand new children’s home in Matugama, about 54 miles south of Weligama, where they were staying when the tsunami hit.

This marks their first major charity project since the Gandys initiative took off.

This year, the brothers met Princes William and Harry in Buckingham Palace and, in true Forkan style, forewent the usual formal attire for a pair of Gandys.

“Prince William empathised with our loss in regards to losing his own mum at 15, but told us that there will always be a silver lining, something we’ve always tried hard to live by,” Rob said.

In the 10 years that have passed since that life-shattering day, the Forkan children have picked themselves up, dusted themselves down and tried as best they can got on with life.

While their lives may never be the same again, they are focusing their grief on a worthy cause and giving back to those who had such a major impact on their childhoods.

The incredibly heart-breaking, yet heart-warming, story of Rob and Paul’s lives from that doomed trip to now, has just been released in book form.

"Tsunami Kids: Our Journey from Survival to Success" is available now – with 10 per cent of the proceeds going to charity.