THE FUNERALS of the five people who drowned in a tragic accident in Co. Donegal have taken place in Derry today.

Among the mourners at the service were representatives for Irish President Michael D Higgins and Taoiseach Enda Kenny as well as and Martin McGuinness, Northern Ireland Deputy First Minister.

Fr Patrick O’Kane, parish priest of Ballymagroarty, began the funeral service be saying: "We are plunged in grief. Even the heavens are crying. Five beautiful people have been taken tragically from our midst. Five people whom we loved. Not just this family, this community, this country, but also people from all over the world are united with us in grief."

Speaking in his homily, the priest recalled the moment he learned of the tragedy.

"When the news broke on Sunday evening that a terrible accident had happened on Buncrana pier my prayers for the dead and bereaved included a prayer for the priest who would have to face the family and at the funeral try to make sense of this tragedy. Little did I think I was praying for myself," he said.

"Then at seven o’ clock on Monday morning I got a call ‘It’s Louise James here, Fr Paddy’ she said ‘that was my husband, my children, my mother, my sister that died yesterday evening.’

"Stunned, I later made my way to her home where the grief was palpable. Grown men stood, red eyed, in silence. Words could not come to my lips to put any shape on what I felt inside."

"When I visited the funeral home on Tuesday morning and saw the five coffins, their occupants so peaceful in that sleep we call death, I broke down in tears.

"I was bereft and deep sighs came from my heart. When finally prompted to pray by the undertaker, the words seemed to echo, so empty and hollow." 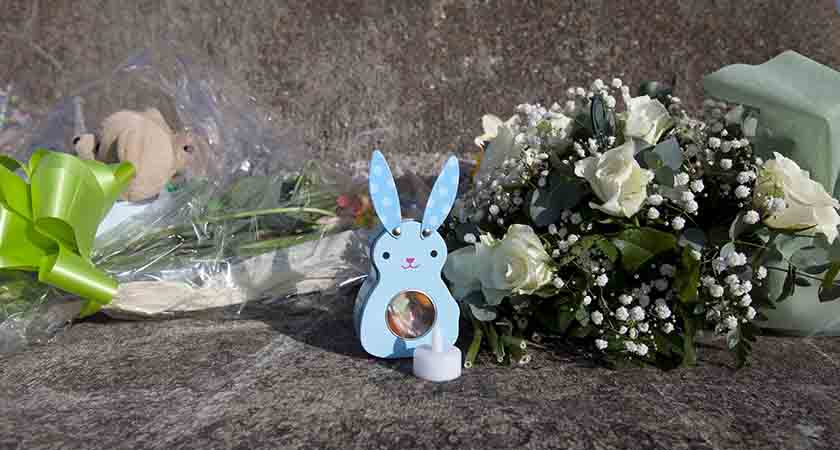 Flowers and other items left on the pier in Buncrana (Photo: RollingNews.ie)

The fatal incident occurred on Sunday, March 20 on Buncrana pier in Co. Donegal at around 7.30pm, when the car carrying the five family members from Derry slipped from the pier into the water.

A four-month-old baby girl, Rioghnach-Ann, was in the car at the time but was rescued by passer-by Davitt Walsh – who attended the funerals in Derry this afternoon.

Fr O'Kane described the baby's rescue as a 'little sliver of light'.

"As Louise says to me again and again ‘She is my only reason to go on living’. I baptised her at this font on January 23 in the company of her parents Louise and Sean, her godparents Joshua and Gemma and her extended family.

"The day before I paid them a visit at St. Eithne’s Park where they made me welcome and asked me to bless their beautiful little family home," Fr O'Kane said.

"While I was there I was told that little Evan had muscular dystrophy and how Louise has so far raised £16,000 for that charity including a tandem parachute jump from 14,000 feet.

"Two weeks ago we were gathered as a family again when he made his First Confession – that same little Evan who, when his mother phoned him at five to seven on Sunday evening as they sat on the pier to watch the sunset, said ‘Mammy I miss you so much. I am going to give you the biggest, tightest hug you ever got, when I see you again’."

Louise McGrotty lost her partner, two sons, sister and mother in the accident, which occurred as she was returning from a hen party in Liverpool. Only her daughter survived. 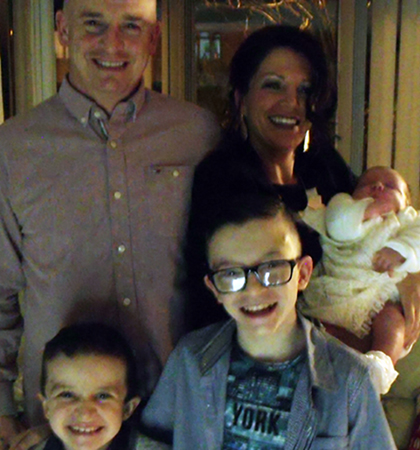 Mr McGrotty (left) died in the accident along with his two sons (pictured). Louise McGrotty (top right) and her baby daughter who survived the tragedy. Photo: RollingNews.ie

At the funeral service, which took place today at the Holy Family Church, Ballymagroarty, the family’s parish priest Fr Paddy O’Kane recalled a meeting between Davitt Walsh and Ms McGrotty.

“Louise was crying, Davitt was crying, we were all crying. It was one of those moments that come once in a lifetime,” he said.

“It could easily have been seven deaths, not five," Louise added.

The parish priest also paid tribute to Sean McGrotty, who died trying to save his family, while describing Davitt Walsh - the man who saved baby Rioghnach Ann, as a 'our hero'.

He said: "The self-sacrifice of Sean on Sunday evening as he desperately tried to save his family, we saw that altruism again in the bravery of Davitt Walsh who saved the life of Rioghnach Ann by swimming out to rescue her. Davitt, today we salute you as our hero."

“I have heard with the greatest sadness of the terrible loss of life of a family in Buncrana,” he said. “My heart goes out to the family and loved ones. Sabina and I wish to express our deepest sympathies to the family and their communities.”

Bishop Donal McKeown, Bishop of Derry, also paid tribute to those in the city who have rallied around the McGrottys this past week.

"The wider community here has responded magnificently to the unspeakable tragedy that has afflicted Louise and the wider family circle," he said.

"For this bereavement has affected many members of the extended family who have also lost close relations and friends in Sean, Ruth, Jodie-Lee, Mark and Evan."

"The community has tapped into a great wellspring of goodness that has helped to counteract the awful toxin of sudden death.

"For many others in our community, these tragic days will bring back memories of personal loss and tragedy, awakening trauma that they experienced over the years.

"The scars of personal tragedies lurk in the hearts of so many people. But on days like this the language of faith is still very close to the surface. That is why this is such a compassionate and resourceful city."