THE NEW Government's inarguably rocky start has hit another bump in the road.

Green Party leader Eamon Ryan is drawing controversy after he appeared to fall completely asleep during Dáil proceedings yesterday and had to be woken up in order to cast a vote on workers rights in Ireland.

His name was called a number of times and he was eventually woken by Fianna Fáil chief whip Jack Chambers.

Once Minister Ryan was woken up, he voted against the motion, which had sought to secure more protections for workers such as a living wage, protection against precarious work and the valuing of essential workers.

The motion did not pass, and Social Democrat TD Gary Gannon, who proposed it, said it was "disappointing" that the Green Party leader could not stay awake.

"There is a manner in which we carry ourselves in the Dáil chamber and there is an expectation that at the very minimum, you should be awake," he said, according to The Independent.ie.

"We brought this motion very seriously and I felt very honoured to propose this motion.

"The leader of the Green Party is going to be asleep after amending it without any substance, I don't think it sends a very good message."

Mr Ryan and the Green Party have not yet addressed the gaffe, but the reaction on social media is ranging between pure annoyance and a 'sure if you didn't laugh, you'd cry' state of mind.

"Eamon Ryan has to be woken up to vote AGAINST a bill to give workers a living wage," one community page, Irish Unity wrote. "You couldn't make it up." 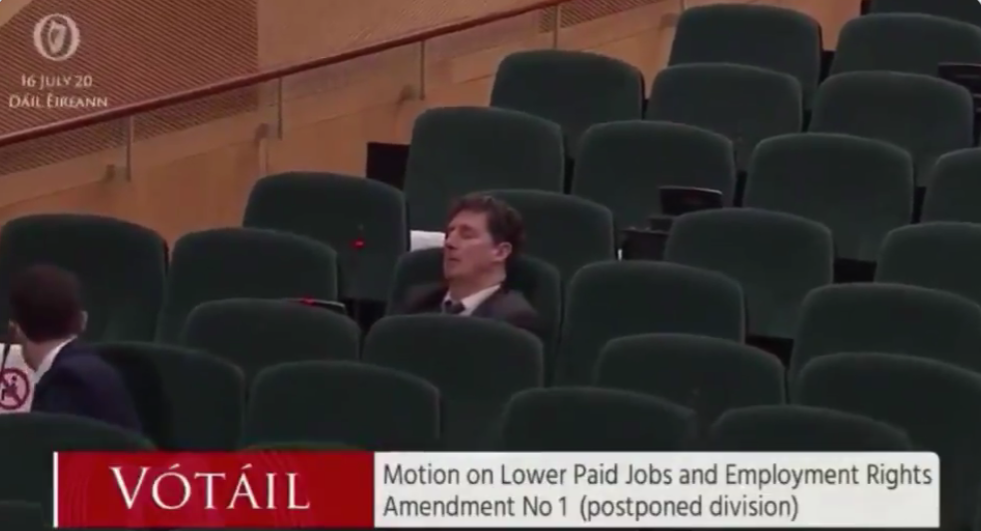 Some defended Mr Ryan, with one man, David Cochrane, arguing that the Green Party leader, like everyone, "has been working in mad, crazy, exceptional times.

"The Convention Centre seats are not made for the function they are now being used for. Leave Eamon Ryan alone."

Meanwhile, one man managed to get a Father Ted reference in.