POSTERS TELLING residents at a block of flats in Norwich to speak the “Queen’s English” have been reported to the police.

The posters, bearing the title “Happy Brexit Day” appeared in the communal areas of Winchester Tower on Vauxhall Street in the wake of the UK’s departure from the European Union.

“As we finally have our country back we feel there is one rule to that needs to be made clear” they read.

“We do not tolerate people speaking other languages than English in our flats,” the poster says.

“We are now our own country again and the the [sic] Queens English is the spoken tongue here.”

The author adds: “If you do want to speak whatever is the mother tongue of the country you came from then we suggest you return to that place and return your flat to the council so they can let British people live here and we can return to what was once normality before you infected this once great country.” 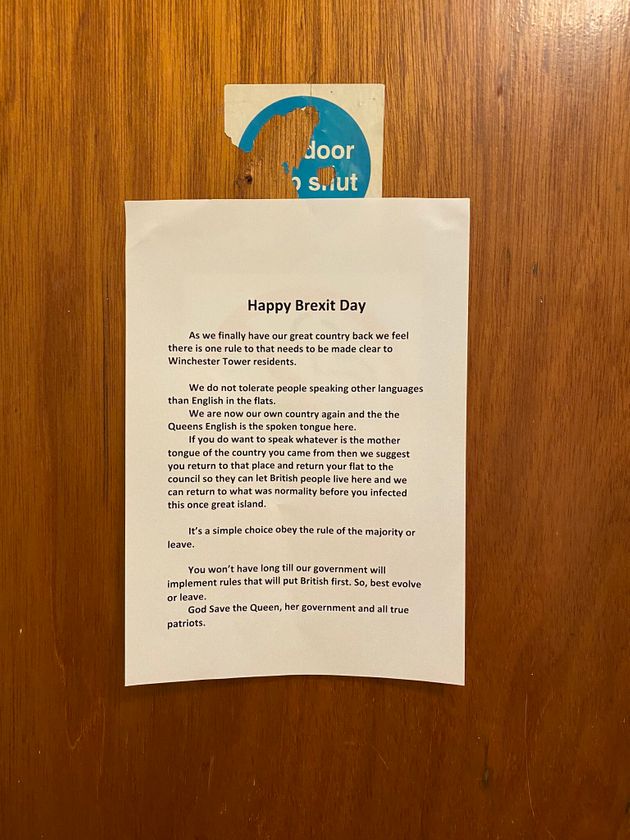 A picture of the poster found its way on to Twitter, prompting criticism and anger online.

BT Sport presenter Jake Humphrey was among those to condemn the message.

“This trending photo from a door in Norwich makes me livid & embarrassed,” he wrote.

“Norwich is the most tolerant, accepting, loving city I have ever lived in or visited.

“This photo in no way represents our county or city. A racist, bigoted minority will NEVER be tolerated & NEVER prevail.”

This trending photo from a door in Norwich makes me livid & embarrassed.

Norwich is the most tolerant, accepting, loving city I have ever lived in or visited.

This photo in no way represents our county or city. A racist, bigoted minority will NEVER be tolerated & NEVER prevail. pic.twitter.com/9De3s8g17d

Ben Garrod, a Professor at the University of East Anglia also denounced the poster.

“Nothing justifies this,” he said. “Norwich is an open, inclusive place; this hateful crap needs to be dealt with.”

Don’t care about your politics, where you’re from or how you define yourself, nothing justifies this. Norwich is an open, inclusive place; this hateful crap needs to be dealt with. Is this being tackled @NorfolkPolice @NorfolkCC @BBCLookEast @itvanglia? https://t.co/2hIhddmG61

An image of the offending poster was subsequently passed on to Norwich City Council.

The incident has also been reported to Norfolk Police who are treating it as a hate crime.

In response to the posters, 50 people including residents gathered outside Winchester Tower in Norwich saying “thank you” to European friends in many languages.

Around 50 people including residents have gathered outside Winchester Tower in Norwich and are saying “thank you” to European friends in many languages - crystal clear message to whoever made THAT poster pic.twitter.com/ZzxrcXD84j

Several messages messages of love and support have been posted in the reception area of Winchester Tower in direct defiance of the posters.

We live very close to the Winchester Tower flats in Norwich and this is what we saw when we walked past on the way back from Tesco. This is the Norwich I want to live in 🥰 #NotMyBrexit@Findinga_Voice @thecommonlotnc @mrjakehumphrey @NorwichRising pic.twitter.com/wJWu9htBDl

A Norfolk Police spokesperson has confirmed that officers have attended Winchester Tower and removed all of the posters.

An investigation, including the close examination of CCTV footage obtained, is ongoing.

The spokesperson added: “There is no place in society for hatred and intolerance.

"Nobody should have to face intimidation because of who they are and it is more important than ever that we stand together in the face of hostility.

“We remain committed to helping people feel safe and secure as they go about their lives.

“The matter is being dealt with as a racially aggravated public order incident and anyone with information which could help officers with enquiries should contact Norfolk Police on 101 quoting crime reference 36/7964/20.”