'My name is Conor. I am 23. I love my life.' - Young man with Down Syndrome speaks out against abortion referendum

A 23 YEAR OLD MAN with Down Syndrome has issued a plea to the people of Ireland not to repeal the eight amendment, and has lent his voice to the Save the 8th campaign.

Conor O' Dowd from Drogheda, along with his father Michael, spoke at a Save the 8th press conference in Dublin yesterday.

The press conference was called to address media backlash following the use of an image of a young girl with Down Syndrome on pro-life campaign pamphlets in the last few days.

Down Syndrome Ireland called the use of the image as "disrespectful to both children and adults with Down Syndrome and their families", and that such images "should not be used as an argument for either side of this debate".

Save the eight spokesperson and member of the Life institute Niamh Ui Bhriain criticised Taoiseach Leo Varadkar for “dressing cruelty up as compassion” when he announced his advocacy for a vote for repeal during Monday’s referendum conference.

Ms Ui Bhriain also said that it was “extraordinary that anybody in the media or any campaigner would use the phrase ‘child abuse’ towards a parent who wishes to include their children and their families in this campaign.

We have every right to put a human face to the horrible statistic that is coming out of so many countries such as Britain, where 90 per cent of children (with Down Syndrome) are being aborted.” 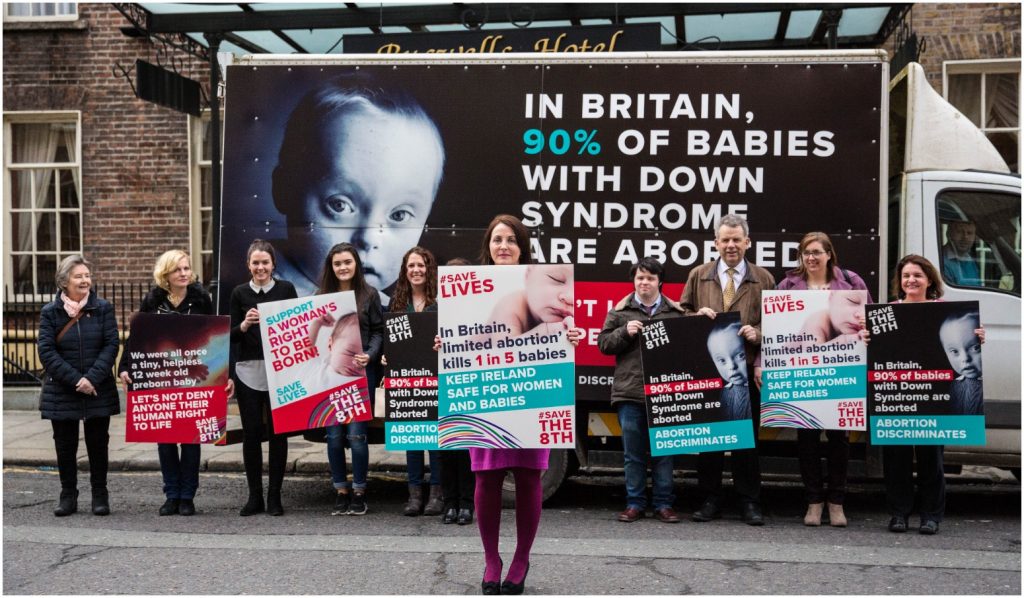 The Save the 8th campaigners holding up the controversial images. (Picture: The Life Institute)

Speaking at yesterday’s press conference, Conor O’ Dowd told the media: “Hello, my name is Conor O’ Dowd. I am 23, I love my life.

“I took today off college to be here. This is a very important day. I am against abortion.”

We would not have felt obliged to speak out were it not for the relentless campaign from some quarters telling us to remain silent. This past week, it has felt like our existence is inconvenient for some supporters of the abortion referendum, and that they would rather we went away and were quiet.

“We will not. It is a cold, hard, undeniable fact that when abortion is introduced, a disproportionate impact is suffered by those children diagnosed with some form of disability.”

Save the 8th spokeswoman continued to say that the Government’s proposal to allow the Oireachtas to legislate for abortion, “places the rights of the unborn in the hands of fickle and poll-driven politicians”.

“If this proposal is passed, we will never be given a say over the rights of the unborn again,” she said.