POLITICAL PARTIES in Northern Ireland are today studying the details of a draft deal reached by British and Irish governments with the aim of restoring devolution to Stormont.

Julian Smith said that what happens next will be "a moment of truth for the Belfast/ Good Friday Agreement.

"It is a fair and balanced deal that will ensure key decisions about peoples' lives can be made."

Simon Coveney also urged Stormont parties to accept the deal, saying "there is no need, and no public patience, for more process and more discussions".

Initial reactions from the parties are cautiously optimistic, with Sinn Féin leader Mary Lou McDonald saying her party are "studying the test and will give it careful consideration", and DUP leader Arlene Foster saying "it is not a perfect deal" but that there would "always need to be give and take". 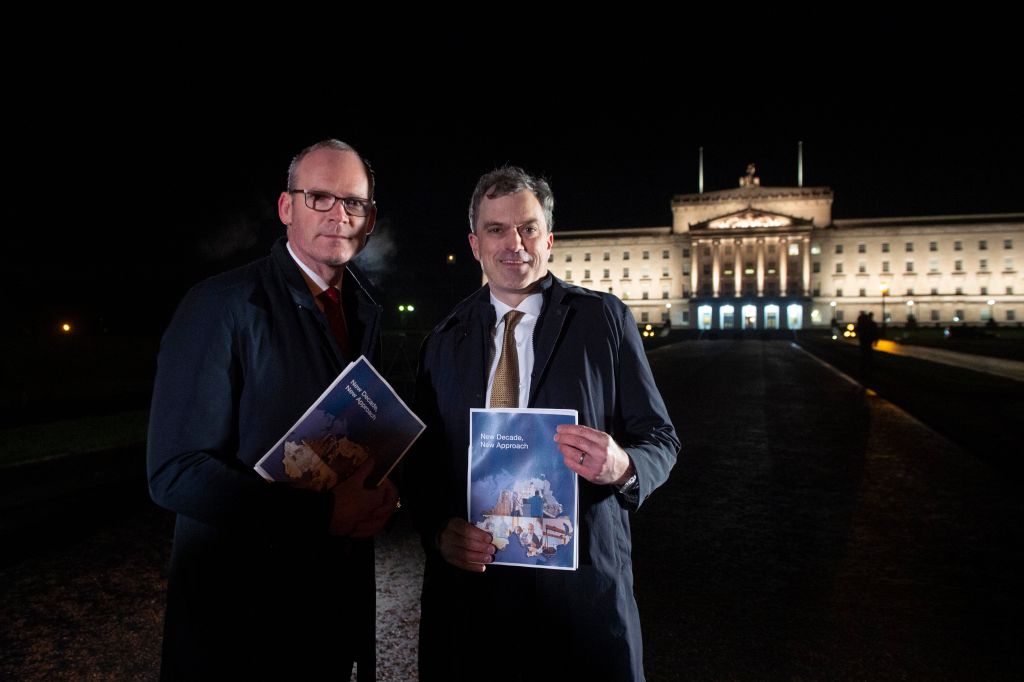 'New decade, new approach': Mr Coveney and Mr Smith with the deal which they hope will restore devolution (Photo by Charles McQuillan/Getty Images)

The deal, which can be read in full here, makes attempts to appease both sides of the Nationalist / Unionist identity within Northern Ireland.

It includes the proposed set-up of an Office of Identity and Cultural Expression "to celebrate and support all aspects of Northern Ireland's rich cultural and linguistic heritage".

A new Commissioner will "recognise, support, protect and enhance the development of the Irish language in Northern Ireland", and a second new Commissione will enhance and develop the "language, arts and literature associated with the Ulster Scots / British tradition".

Both Irish and Ulster Scots will be officially recognised as languages of Northern Ireland, and any person is permitted to conduct business within the Assembly in either language.

The deal also includes the promise to end the ongoing strikes by both healthcare professionals and teachers, increase police numbers and reaffirmcommitment to tackle sectarianism and paramilitarianism.

Northern Ireland currently holds the world record for the longest period of time without a sitting government.