NEARLY half-a-million people called on Britain’s Work and Pensions Secretary Iain Duncan Smith to ‘put his money where his mouth is’ by living on £53 a week for one year.

An online petition endorsed by the 450,000 signatories, demanding he take the £53 challenge, was handed into Mr Duncan Smith’s department last month.

The Minister, who lives in a 16th century mansion in Buckinghamshire, has dismissed it as “a complete stunt”.

The petition was launched in reaction to the senior Conservative’s claim that he could live on £53 a week.

“If I had to, I would,” he retorted after being challenged by a market trader, David Bennett, who has been forced to survive on the small stipend as a result of the Government’s welfare reforms.

Dom Aversano, who created the petition, claims the MP for Chingford and Woodford Green would suffer a 97 per cent cut in his £1,581.02 weekly salary — £225 a day after taxes — if he took up the challenge.

“This is a complete stunt which distracts attention from the welfare reforms which are much more important and which I have been working hard to get done,” Mr Duncan Smith said this week. “I have been unemployed twice in my life so I have already done this. I know what it is like to live on the breadline.”

This week, The Irish Post’s Niall O’Sullivan took the £53 challenge.

Travel is the first budgetary consideration forced upon me. Living in zone four of the London Underground network means I am too far away to cut my costs by cycling or walking part of the way to work. The Irish Post’s office is in central London and my monthly underground travelcard costs me £39 a week. That necessary spend means my budget is slashed to £14 before I have even started.

“At least I won’t have to account for rent or utility bills because I live with my parents,” I tell myself. “But I should probably skip breakfast.” After a busy morning working towards our weekly deadline on an empty stomach, I am lured mindlessly to the nearby Pret A Manger at lunch, only to be reminded of my challenge by a pocket full of change.

Breakfast: 70g of Crunchy Nut Cornflakes without milk. The first real sacrifice forced on me by the budget is that I cannot begin Tuesday with a gym session, a luxury I could scarcely afford on £53 a week.

It is quickly followed by the second sacrifice: I cannot use the Spotify music database which I usually pay £10 a month for, to make the commute a little more enjoyable. I must opt for free tunes on the less user-friendly YouTube instead. Lunch: Tesco again — two bagels and a banana (99p). 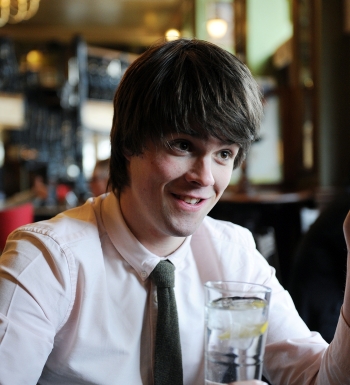 Niall settles for a tap water at the pub.

After work I meet a friend in North London. He has just started a new job and I am eager to ask about it, but cannot offer to buy him a drink to celebrate. He gets a pint of cider (£3.80). I get a free pint of tap water and the barman’s mockery for no extra charge. Dinner: 100g of pasta with no sauce.

Lunch: Chicken sandwich from a local café (£1.80) and a banana (19p). Following a series of phone calls and an afternoon spent chasing my tail, I’m worried I will not have enough stories to contribute to the paper this week.

Steve Cummins, our entertainment editor, notices my exhaustion and mentions a goodwill initiative he has read about called Suspended Coffee. The idea is simple: Customers pay for two coffees — one for themselves and another for someone who cannot afford coffee to claim later.

Out of curiosity more than anything I decide to investigate. “Are you telling me you want a free coffee?” asks the Starbucks barista incredulously after a fruitless conversation. I explain again. “Sir, I do not know what you are talking about but we do not do free coffees,” she says. Luckily, the office is overflowing with unwanted Easter eggs and a free chocolate hit tides me over until dinner.

Thursday begins badly. Having forgotten to charge my iPod overnight I discover with one foot out the door that I will be without Wednesday’s BBC news podcasts and face an hour of interminable boredom on the Tube. Normally in this situation I would buy a newspaper, but not the kind you can afford on a strict allowance.

So I stuff Monday’s Guardian, which I borrowed from a colleague, under my arm and reread about the Government’s welfare reforms. Lunch: 2 bagels (80p), 1 banana (19p) and an energy drink (75p) Clumsily fiddling through my wallet in Barbican station I come across the first (and only) nice surprise of the week — a fully stamped loyalty card for a local sandwich shop. I decide to save it for Friday evening. 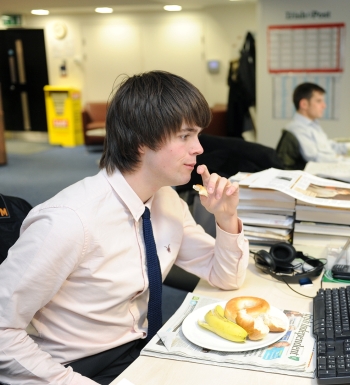 Lunch: 2 bagels and a banana (99p). With dinner to look forward to, the budget is at the back of my mind until the Grand National sweepstake finds its way to my desk. I put £1 in and pull out Saint Are. My colleague Robert Mulhern says it could be a good omen because the horse’s mount is Dougie Costelloe (one of our columnists).

When he does not place on Saturday I feel a little relief, as the point of the £53 chalenge was hardly to prove that gambling could help the millions of British people who have been forced into a financial corner by the global economic crash. Dinner: A free chicken escalope baguette (normally costing £3.95).

In no uncertain terms I am reminded by my mother that I need a haircut, an almost certain impossibility on my budget even if I wanted one. Buying new tennis balls is also not an option at this stage and as I walk with my brother to the local free courts (not the club of which we are paying members); I rue my decision to buy a sandwich on Wednesday and an energy drink on Thursday.

Walking straight past the barbers on the way home, I make my final purchases of the week, a loaf of bread (£1) from the local baker, a bottle of “value” squash (50p) and two small chocolate bars (40p). I call a friend in the evening to explain that I will not be able to go to the cinema tonight. After we discuss how he would have spent the money, he adds: “Wait, you have not accounted for your phone bill.” He is right.

Having spent my £53, there is little point thinking about the budget on Sunday. But as I work from home and catch up on the week’s news thanks to the incredible charity of online newspapers, my sluggishness is undeniable.

Verdict: Readers will have no doubt correctly concluded that I failed to live on £53 a week. I did not include payment for utilities bills; I also failed to mention other essentials, including my toothbrush, shampoo, soap and clothing. Quite simply, if I had to cover those costs, I would have starved or had to beg others for money. But what struck me most in my attempt was that for those who are forced to live on such a small stipend for long periods enjoying any pleasure for which there is a cost is impossible.

I would love to see Iain Duncan Smith take up the £53 challenge but I also suspect, after the week that was, that he too would fail miserably. That said, some first-hand experience of what people in Britain are experiencing on the frontline would give him a very much needed dose of reality.