Soldiers, police officers and firefighters walk near dead bodies covered with a blue sheets on the Promenade des Anglais seafront in the French Riviera town of Nice on July 15, 2016. (VALERY HACHE/AFP/Getty Images)

AN  IRISH person is among the injured following last night's attack in Nice when a man drove a lorry into large crowds enjoying Bastille Day celebrations in France.

Taoiseach Enda Kenny told RTÉ that one Irish person has been caught up in the attack.

Mr Kenny offered his condolences on behalf of the Irish people to the French President Francois Hollande and the people of France.

The Irish victim is said to be in a "critical" condition in hospital.

Mr Kenny condemned the attack as an "act of madness" and described it as an atrocity as another "tragic incident in a world of uncertainty".

At least 84 people are known to have have died when the driver ploughed through the Promenade des Anglais at about 23:00 local time, before being shot dead by police.

Speaking to RTÉ, Robert Green, from Coolock in Dublin, who is a barman in Ma Nolan's Irish bar in the city, said "There was no noise. He came in between us and the beach...Some people pushed their youngsters out of the way, we ran to the beach.

"I was not really looking at the driver at the time. I was more fixated on the truck and the people, the bumper was gone. That's when I thought, he's not just going to stop, this isn't an accident, he was ploughing into people.

That's when I thought, he's not just going to stop, this isn't an accident, he was ploughing into people. 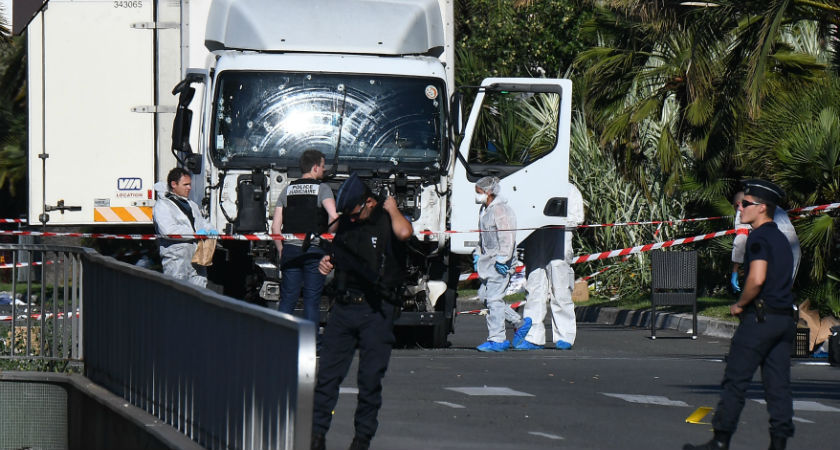 Forensics officers and policemen look for evidences in a truck on the Promenade des Anglais seafront in the French Riviera town of Nice on July 15, 2016 (ANNE-CHRISTINE POUJOULAT/AFP/Getty)

The identity of the driver of the truck is believed to be a 31-year-old French-Tunisian named by local media as Mohamed Lahouaiej-Bouhlel.

No group has so far claimed responsibility for the attack.

The driver lived in Nice and had been in trouble with the police in the past for petty crime, but he was not on the watch list of radicalised young men.

The Department of Foreign Affairs is still advising Irish people in France to exercise "a degree of caution" while in the country and has issued a contact number for Irish embassy in France for people to call who have been affected by the attack.

Irish citizens in #Nice who need to contact the Embassy can do so at 0144176700. Stay safe and follow instructions of local authorities.

Archbishop Eamon Martin has called for prayers for those killed and injured in last night’s terrorist attack in Nice, France.

"The horrific scenes on the streets of Nice once more send shock waves into our homes and hearts. How helpless we all are when someone decides to deliberately and indiscriminately target human life. Please keep the people of France in your prayers and especially the dead and injured, the families and loved ones of all those caught up in this senseless and brutal act."

"Our thoughts and prayers are with also with the first responders and with members of the French community living here in Ireland. I invite everyone to undertake an act of kindness or compassion this weekend, perhaps in some small way to counterbalance with love this awful crime," added the Archbishop.

Read the Taoiseach's full statement in the wake of the incident.

Statement from Taoiseach @EndaKennyTD on the attack in Nice: pic.twitter.com/7ZfmYG4D0H