Irish-Jamaican couple put a positive spin on the 'No dogs, No blacks, No Irish' message with their brilliant t-shirts

The phrase is a subversion of the racist signs seen in pub windows and newspapers in 1970s London, which read 'No Irish need apply' or 'No blacks, No dogs, No Irish'.

The couple has been together a year and half and live in Brixton.

Girlfriend Taurayne McKen, 28 is a South Londoner of Jamaican descent and has just finished her final year of a forensic psychology degree.

Taking that negative and turning it into a positive, in this current climate it’s important

Speaking to The Irish Post, Richard, or Richy to his friends, explained this isn’t the first version of the t-shirt.

“I first had the shirt made the shirt six years ago, but I put it in a box and it lay dormant, I didn’t really run with it.”

He never really let the idea go though and decided to re-visit the design this year.

A few adjustments to the size of the text and he had the latest version printed.

Shortly after he was spotted out wearing it when walking his dogs.

“I was stopped in Brixton two months ago by this young lad, he wanted a picture of me in the shirt and he posted it on Instagram, he tagged me in the picture and people started asking about the shirt and where they could get one.”

That lad happened to be DJ Swiss, former member of MOBO award winning garage group So Solid Crew, and owner of an Instagram account with over 7,000 followers. 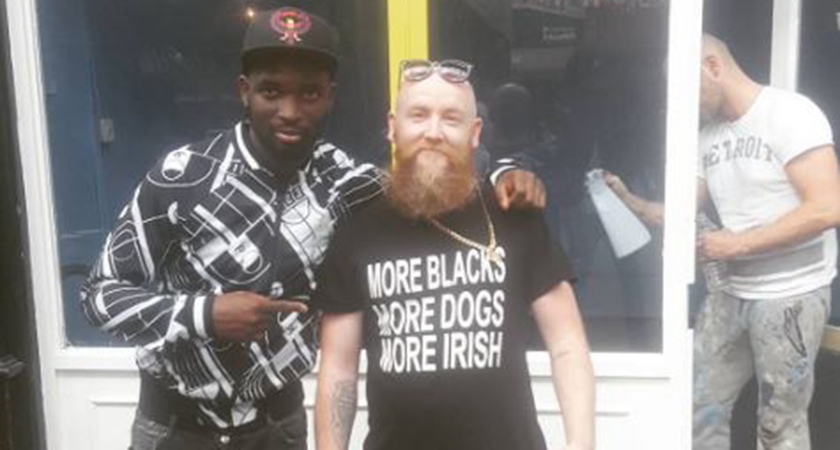 Since then, orders have been coming thick and fast from beyond the capital including from back home in Ireland.

The shirts may be tongue in cheek, but with a rise in hate crimes being reported across the UK since Brexit, and the #BlackLivesMatter protests taking place both here and in the US, they have a serious political message too.

"Taking that negative and turning it into a positive, in this current climate it’s important."

Back in Brixton they are keen to raise awareness of the problems caused by gentrification in the area, and the impact this is having on both black and Irish communities, acknowledging the close bond forged between the two due to years of shared discrimination in the past.

With this in mind, couple are in the process of starting a website, with plans to branch out and do a whole line of anti-racism shirts.

"Anything that spreads a little love," says Richard.