IN the immediate hours after Britain voted to leave the European Union, Google experienced a dramatic 100 per cent surge in people searching for information on how to obtain Irish passports.

Earlier this year The Irish Post revealed Irish passport applications could take up to seven weeks to process following a surge in demand for passports and renewals. 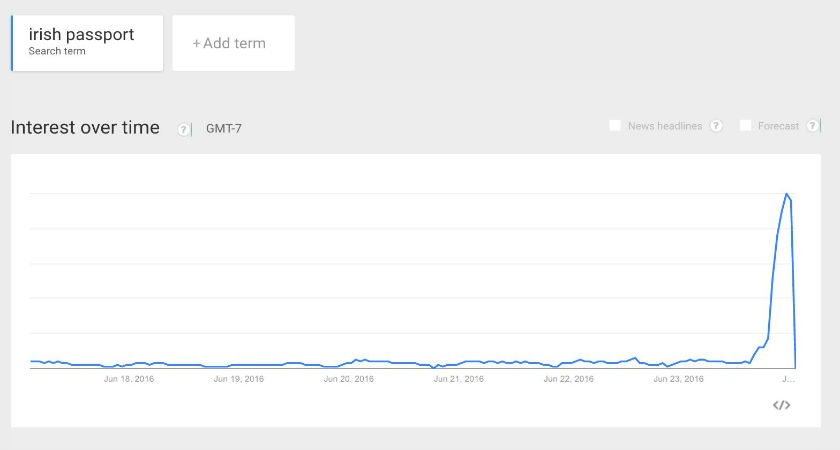 Just hours after the vote to leave was announced, "what is the EU" became the second most googled question behind "what does it mean to leave the EU?".

"What is the EU?" is the second top UK question on the EU since the #EURefResults were officially announced pic.twitter.com/1q4VAX3qcm

On global trending "when did the UK join the EU?" was the top question ahead of "why did the UK leave the EU?".

"Why did Britain leave the EU?" - Top questions on the UK globally are all about the #EUref and #EURefResultspic.twitter.com/NwuypqcNtD

The top trending topic on Twitter UK was a BBC story suggesting Morgan Stanley was already moving UK staff to Germany in the wake of Britain quitting the EU.

Immediate reaction to the UK vote to 'leave' was strongest in the Netherlands and France, with the highest numbers of hashtags debating a possible EU exit, with over 7071 and 6969 uses respectively discussing the issue at its peak.

UK social media accurately predicted the outcome of the referendum as far back as early May.  The day before the vote, Talkwalker, one of Europe’s biggest providers of advanced social media analytics, registered 615,200 "leave" posts, v 467,700 "remain" posts.