TWO Irish pub-goers have been left red-faced, in every sense of the word, after ranting at a bar on TripAdvisor for failing to provide customers with sunscreen.

In a pair of reviews posted on the website, a couple of revellers took aim at Malones Irish Bar in Glasgow after they came away from a day of drinking in the pub’s beer garden badly sunburnt.

In the lengthy posts, the disgruntled customers took aim at the pub’s staff for failing to warn them they were burning.

They also appeared angry that they had not offered them sunscreen. 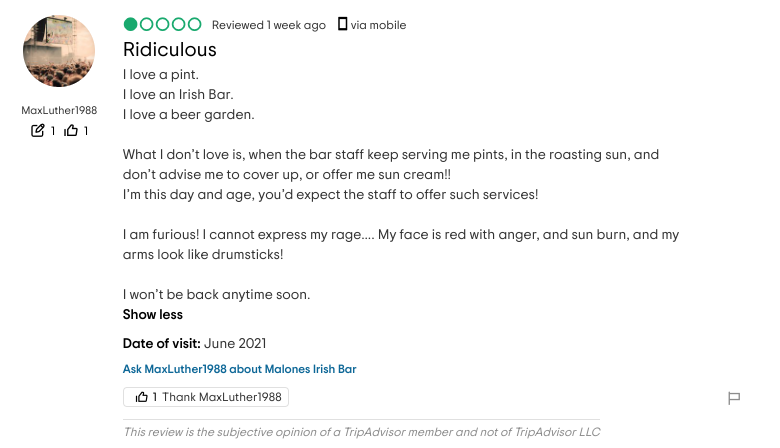 The first review posted by MaxLuther1988 earlier this month began: “I love a pint.

“I love an Irish Bar.

“I love a beer garden.

“What I don’t love is, when the bar staff keep serving me pints, in the roasting sun, and don’t advise me to cover up, or offer me sun cream!

“I’m this day and age, you’d expect the staff to offer such services!

“I am furious! I cannot express my rage….My face is red with anger, and sunburn, and my arms look like drumsticks!

“I won’t be back anytime soon.”

“I sat in the beer garden for four hours and ended up badly burned.

“But not a word was said, nor the offer of them putting sun cream on for me.

“I won’t be back anytime soon.”

The posts prompted Malones Irish Bar to respond via Facebook with a tongue-in-cheek warning that sun cream is not provided to customers.

They also warned “if it rains, you may get wet”.

Malones shared snapshots of the reviews on Facebook, writing: “We always love a review but don’t really know how to respond to this.

“Think it’s someone having a laugh. But just to make sure.

“We would like to let all our customers know that on the roof if it rains you may get wet. If it’s sunny you may get burnt.

“We do not supply sun cream.”

Commenting on the post, the Irish pub’s followers appeared stunned at the tone of the complaints.

“Even nursery school don't give out suncream you have to buy your own so take responsibility for sitting in sun to long,” one noted.

“Can you confirm you also remind your customers to breathe air or i wont be back,” another asked sarcastically.

A third noted: “I bet if they had been advised to cover up there would be complaints.”

Appeal for information on Glasgow man reported missing 20 years ago